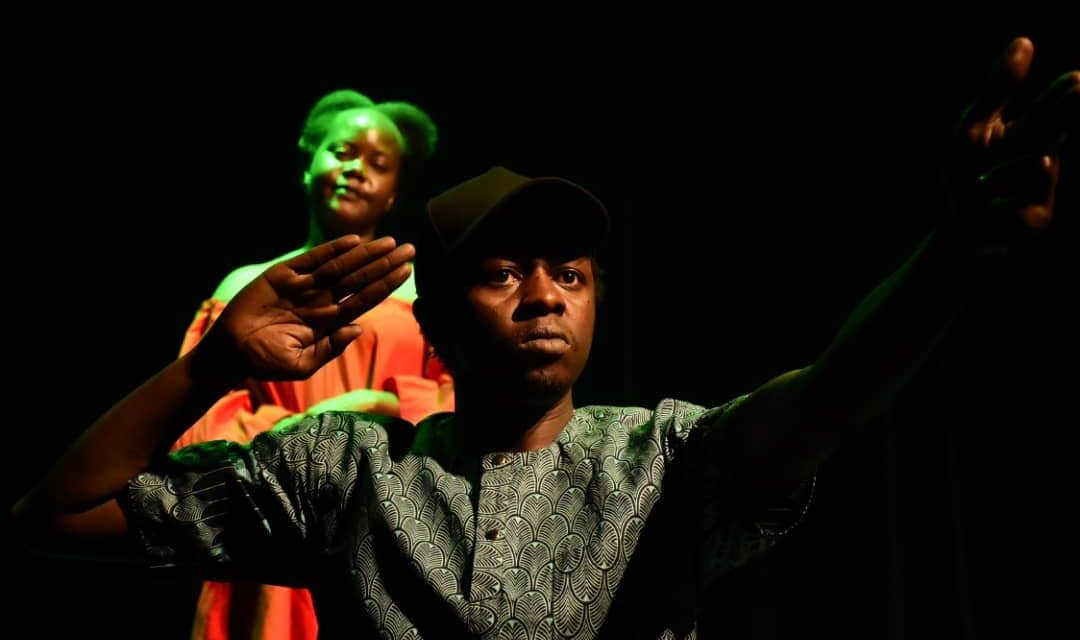 We’re in Uganda, a small but agriculturally-blessed country in Eastern Africa. Dambya, a student at John Speke High School, is caught by the headmaster – Mr. Full Stop – speaking in his mother tongue. In a bid to enforce the ‘No vernacular speaking’ school regulation, Mr. Full Stop goes to great lengths to humiliate Dambya in order to deter other students from speaking their indigenous languages…

What you have read above is a scene from Ugandan poet Kagayi Ngobi’s forthcoming theatrical production, No Speaking Vernacular. A fusion of poetry, dance, and song, the show explores the themes of language and identity in African schools today. It pulls back the smiling mask of education to reveal the frowning face of colonialism and its effects on African culture. There is no corner of the continent (apart from Ethiopia) that can’t relate to the issue of cultural domination by historical colonial powers. It is still not uncommon to hear various parts of the continent being referred to as ‘Anglophone Africa’, ‘Francophone Africa’, ‘Lusophone Africa’, and so on. In fact, there are more French and English speakers in Africa today than there are in France and England respectively! And it’s no coincidence. As Kagayi’s play demonstrates, ‘children who speak their mother tongues in schools’ are subjected to ‘physical and psychological violence and humiliation…in a bid to make them “more civilized”.’ But what does this do to indigenous languages and the collective self-esteem of the Africans? Many artists, thinkers, and educators have voiced concern about the privileging of foreign languages over indigenous ones but most learning institutions and the power elites don’t seem overly concerned about the cultural decline. 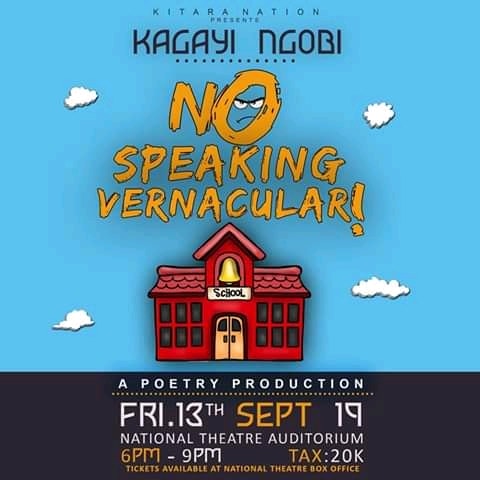 The publicity poster for “No Speaking Vernacular”

Prof. Ngugi wa Thiong’o, a Kenyan novelist and academic, is probably the continent’s best-known ‘language warrior’ and has fought for vernaculars on many fronts. He has repeatedly said:

In the same vein, Dr. Cheikh Anta Diop – a Senegalese historian, linguist, and physicist – once said:

European languages must not be considered diamonds displayed under a glass ball, dazzling us with their brilliance.

No Speaking Vernacular is slated for 13th September 2019 at the Ugandan National theatre. Kagayi Ngobi’s previous theatre experience includes the shows Footprints of Memory, which was performed at the 2019 Writivism Festival, and For My Negativity, which was staged in June 2019 at the Uganda National Theatre.

Footprints of Memory was written by poet Harriet Anena and directed by Deborah Asiimwe. A fast-rising literary luminary, Harriet Anena is the author of the poetry collection A Nation in Labour which won her the Wole Soyinka Literature Prize in 2018. The Footprints of Memory show was divided into 4 parts that depicted love at cultural crossroads, the memories of the Lord’s Resistance Army war in Northern Uganda, the plight of love of a courageous man, and the state of politics in modern Uganda. The poems were entwined with song and percussion and the overall performance received a standing ovation from the audience.

For My Negativity was a one-hander:  written, performed and directed by Kagayi Ngobi himself! In it, there’s a State Research Bureau Television show whereby the TV host interviews a Lawyer and a Poet.  All roles were played by Kagayi Ngobi. 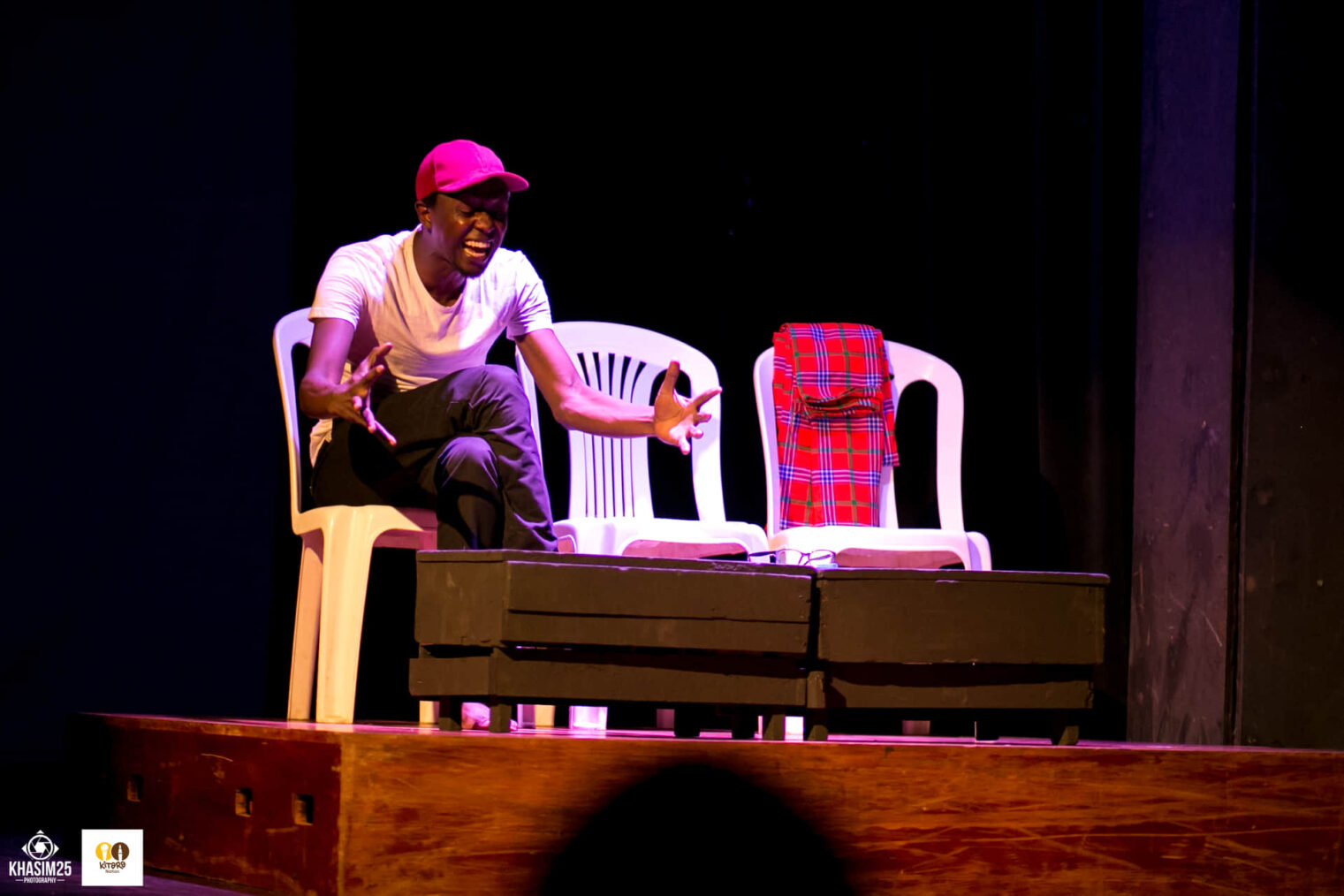 A scene from For My Negativity (Photo: Courtesy)

No Speaking Vernacular is a timely piece of theatre and Kagayi Ngobi is one of the most relevant poets on African soil.

“VAST:” Returning to the Natural Body to Combat the History of Colonialism 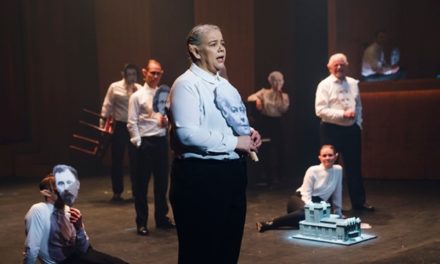