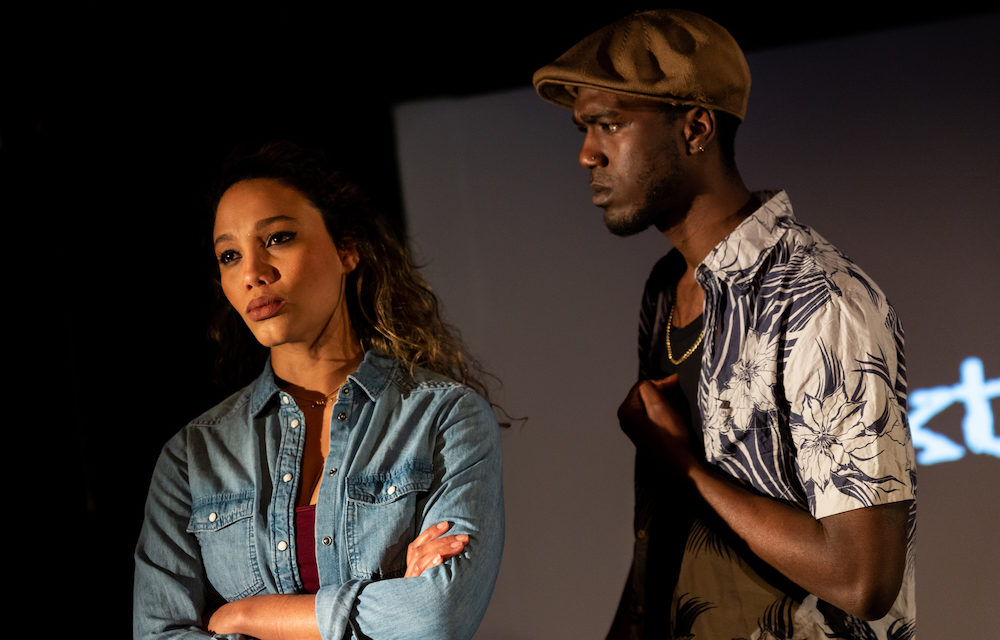 Mainstream theatre is often a huge treasure chest, blazing with jewels and flashing lights, while fringe theatre can be a little gem, which gleams seductively in the dark. So while the main houses usually play safe, offering familiar stories in familiar formats (however glittering), it’s the smaller venues where you can find plays written in more experimental ways, and telling more contemporary stories. For these reasons, I really loved my first theatre show of 2019, which promises to be a tumultuous year: Ché Walker’s Time Is Love / Tiempo Es Amore, now at the Finborough, the National Theatre of the fringe, following its premiere in Los Angeles in August last year. And, since it stars Sheila Atim, it’s hot, hot, hot.

Walker, a Londoner who is just back from a three-year stint in LA, sets his story in the City of Angels, a place of Latinos, Latinas, and Latinxs. It is a typical tale of the dispossessed: desperate love, botched crime, disappointing betrayal and violent revenge among the poor people of the world’s richest nation. This is not fancy Hollywood, but Boyle Heights and East LA, where bilingual Hispanic-Americans residents make up more than 90 percent of the neighborhoods, and where levels of deprivation are likewise high. But this is no documentary account: Walker uses a thrilling mix of theatrical alchemy to transform a sad and sordid lowlife tale into a majestic creation of tragic feeling.

Beginning in 2016, the plot shows what happens when youthful best buddies Blaz and Karl try to pull off a heist, which goes badly wrong and ends up with Blaz going to prison for three years. It’s a long time for his childhood sweetheart, the tempestuous Havana, to stay faithful and she is tempted by the attentions of Seamus, a corrupt cop who — unknown to her — first nabbed and then beat up her man. When Blaz gets out of prison, Karl spills the beans about this situation, and Blaz reacts like any “real” man would: with homicidal anger and with a huge desire to bury his grief in the bosom of another woman. On hand and available are Rosa, a lap dancer who is also Havana’s friend, and Serena, a sex worker.

As Serena narrates this contemporary tragedy, with its pointed references to the Trump Whitehouse (an ironic mention of the truthfulness of Sarah Huckabee, his press secretary, and of fake news), Walker’s text takes off, spinning wonderful visions of pterodactyl sex, serpent coils, and orgasms that provoke furious rain storms. This is a passionate story told in a deliberately heightened and poetic register which has echoes not only of Greek tragedy but also of Othello. As the Iago-like Karl and Havana fight over Blaz, there’s also a strong sense of the competition between male and female friendship, with Karl’s feelings being as deep as those of Blaz and Havana’s. With its dizzy eroticism, I was reminded of Walker’s brilliant 1998 debut, Been So Long, in which similarly imaginative riffs took wing. And here, there is even more attention to shifts of feeling, and to the complications of desire.

In Time Is Love / Tiempo Es Amore, the laureate of Camden Town mixes Spanish with English, which gives the characters a raw edginess, and the text conveys a fascinating sense of LA as a place of desert-like dryness, surrounded by large oases of verbal pleasure and small showers of tenderness. The sex scenes, in a 90-minute production directed by Walker himself, are soft dances, and there are constant little trickles of refreshing street wisdom. Although the playwright explicitly rejects the need to explain why his characters have turned out the way they have, there are intimations of abusive, deprived and violent childhoods. For whatever reason, these are selfish and nasty folk, over whom Walker has sprinkled some magic dust, turning them into people you can easily fall in love with, and showing them as human, all too human.

Amid the intensity of much of the playwriting, with its memorable images of a pint of blood from a bleeding nose and “tears of molten semen”, American emerges as a location not of dazzling riches but of devastating poverty and inequality. A parade of lap dance clubs and escort agencies. Career options are gun crime or the sex industry. To be human in these circumstance means keeping your head, even when your emotions are playing havoc with your reason. It’s a place where, in order to survive, you have to learn to tell fictitious stories about your own past and to pursue your desires with the skill of a trickster. Even then, the road is not only rocky but also you’ll be wearing thin-soled sneakers to walk it. Ouch. Hard. Life. And you need to watch the traffic.

Because falling in love, says one character, is like being hit by a truck. And, at its best, this production — with its crazy funny lines and vivid verbal images — feels similarly gut-gripping. This is mainly due to a terrific cast: Gabriel Akuwudike’s Blaz and Benjamin Cawley’s Karl dominate the stage with their different brands of machismo, well matched by Cary Crankson’s sly Seamus, while the women — Sheila Atim’s Rosa, Jessica Ledon’s Havana and Sasha Frost’s Serena — give the story its much-needed reality checks and spread their wise observations generously. Walker directs on a bare stage so that his characters, and not the set, are the show, and although I have mixed feelings about Chai Rolfe’s often distracting video images, I like Atim’s atmospherically apt original music. If this is a play in which the “bedsprings sing a song of mercy”, it’s great to be able to surrender to its charms. And what an exciting way to start the year!

Time Is Love / Tiempo Es Amore is at the Finborough Theatre until 26 January.

This article appeared in Aleks Sierz on January 4, 2019, and has been reposted with permission. 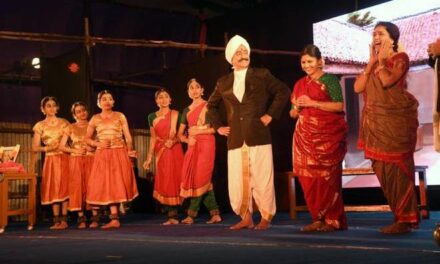