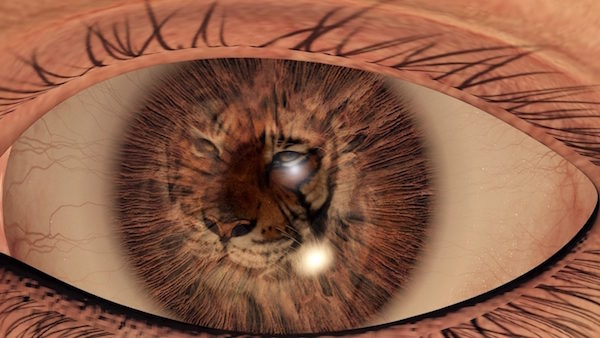 The Kunstenfestivaldesarts (KFDA)’s commitment to promoting “cosmopolitan vision as an antidote to intolerance of all kinds,” at least for its 2018 edition, has gone beyond the fashionable inclusiveness. The incorporation of the Singaporean artist Ho Tzu Nyen’s One Or Several Tigers and, especially Macaquinhos from Brazil in its 2018 programming shows KFDA’s engagement in redefining “cosmopolitanism” as a condition which involves self-criticism, “resist[ing] all kinds of self-centredness”—the most hegemonic and perennial of which is Eurocentrism.*

Coming from different parts of the South whose past and present have been shaped by European colonialism, these two shows at KFDA demonstrate a shared trajectory towards decolonisation—something that has also been gaining momentum in today’s Belgian cultural sector as observed and problematised by Joachim Ben Yakoub and Wouter Hillaert in (Witte) Instellingen: Van Congolisering Naar Dekolonisering.1 However, despite their common impetus, these decolonizing practices interestingly mobilize different tropes to make their case: one the figure of the tiger, the other the anus.

The near pitch-black air the audience breathed, as they made their ways to the screening/performing space at KVS Box, subdued their optic perception giving ways for other faculties to intensify. A full-toned male voice—indicating the locations of the unfolding narrative: “Malaya, Sumatra, Bali, Borneo”—fed into those non-optical perceptions, ushering the audience into the trajectory of the show more with their intuition than with a glaring light of the seemingly uncontested clarity. The voice belonged to a tiger whose eyes then became a man’s. The audience was positioned in the middle of two opposite screens which ultimately staged a “dialogue” between a tiger and a white man. But as metamorphosis is key to Ho Tzu Nyen’s earlier projects, informed spectators of One Or Several Tigers (2017) recognize the artist’s hand when they see the tiger and the white man merging in and out of each other. At one point the tiger sang the voice of man. The four-legged creature, then, became the two-legged one, however with the face of the tiger. At another, the vertical and the horizontal spine lines which delineate the distinction between the human and the non-human melded into a circle and eclipsed the moon on the screen before the limbs would start to grow out and transform the body back into the human form again. The transformation informing the myth of the weretiger is referenced here. It is a story which permeates the Southeast Asian/Malay region:

“Tigers have always been an important part of animist cosmology in our region. The tiger or the weretiger is a myth that spreads across the sea,” said the artist in a lecture organised by Asia Art Archive in America in 2016.

The thread of metamorphosis that runs through One Or Several Tigers can be traced in the artist’s earlier tiger work such as 10,000 Tigers (2014) which traced the invincible lives of the figure of the tiger in the Malay culture, after enforced extinction, “metamorphosed” into metaphors such as “the Tiger of Malaya” and “the Communists—the tiger.” The former refers to the Japanese General Tomoyuki Yamashita due to his “savage, cunning and full of gall” army which defeated the British army during the Second World War. The latter alludes to the Communists with whom Lee Kuan Yew collaborated and whom he later imprisoned after coming into power.

In One Or Several Tigers, European colonial power took center stage. Taken the lithograph entitled Unterbrochene Strassenmessung Auf Singapore (Road Surveying Interrupted In Singapore) as its point of departure, and hence key visual, this last endeavour of the artist’s tiger series recounts a defining moment in the history of Singapore as a nation in 1835 where the Irish civil architect George Drumgold Coleman, as Superintendent of Public Works and Land Surveyor of Singapore, accompanied by the indentured labour “transferred” from Indian prisons to build Singapore’s infrastructures at very low costs, was, as the narrative surrounding this iconic image goes, “attacked” by a Malayan tiger. 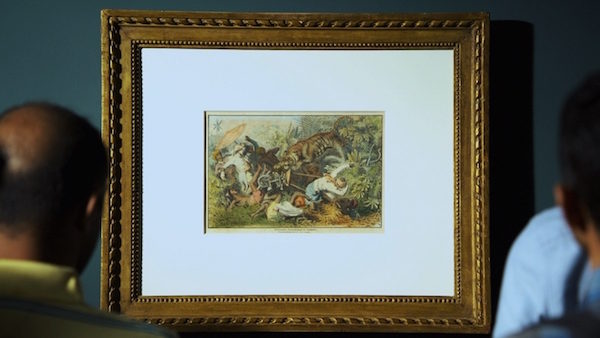 Tzu Nyen’s emphasis on the European colonists’ exploitation of the forced labor from India echoes with his earlier reference to the white man’s extermination of the tiger in early Singapore to prevent them from frightening the laborers, which obstructed and delayed the construction of roads and civic buildings in the colony. The climactic moment of One Or Several Tigers seems to be when the bodies of these Indian laborers merged with the that of the tiger. It was the moment when the pronunciation of “weretigers” and “we’re tigers” blurred into each other. “As the tiger grew into the ways of man,” sings the tiger in the voice of man—in the middle of which is interjected by another trajectory of voice, supposedly man’s: “In this mutual proximity, humans grew into the ways of the tiger.” Despite the narrative voice which pitted the Malayan tiger and the Indian convicts-turned-forced-laborers against each other, it ultimately equalizes this dichotomy by subtly proposing that their fates were not so different from each other. One tiger becomes another.

The Malayan tiger in early colonial Singapore and the Indian laborers, on one layer, shared the same destiny of being subjected to the Enlightenment discourse and the capitalist logic adhering to it. While the British exterminated the “invasive” tigers by creating a bounty system which subjected tigers to capitalist exchanges, the prisoners-turned-laborers were then turned again into inmates of the prison they themselves built, however, this time they were made to provide commercial services like producing rattan furniture sold at the place imprisoning them.

The metaphor of surveillance and control through the figuration of the theodolite, a culminating symbol of the Enlightenment worldviews, was reproduced—along with Coleman, the tiger, and the indentured laborers—from the lithography in form of a shadow puppetry during the course of the 3D animation. This is not only to encompass control in late capitalism in form of self-surveillance through the artist’s inclusion of contemporary migrant workers in their modern-day outfits and rucksacks. The artist, in his latest and last tiger project, gives us a surprising fact that, unlike the survey of the 1835, capitalist logic exerted on these prisoners-turned-laborers in their entrepreneurial prison at the end of the nineteenth century subjected them into the warders of their own self-surveillance.

While One Or Several Tigers’ poetics of metamorphosis centers around the fluidity and translatability between different bodies to effect an emphatic understanding of “…how these constructed histories regulate, define, and control our way of thinking and our mode of life,” Macaquinhos (Little Monkeys)—both the name of the group’s and the performance’s—mobilized a choreography around the anus—a metaphor for the epistemology of the South—as a means to resist disciplinary production of forms informed by the Enlightenment thought, the epistemology of the North.

Asking why the anus is placed “outside the social field,” the Brazilian group consisting of 10 members—inspired by the book The Brazilian People—The Formation And Meaning Of Brazil by Darcy Rieiro—”conversed” with one another through the anus. Moving around the performing space of L’L as a collective circle, first with hands on their knees, then, on all fours, some poked the anus of the person’s in front with his or her fingers, others with their head or lips. Leveling the anus with the head to connect with each other and form a gyrating circle around the performing space, the group subverted the cultural production of hierarchies between the above and the below—a top-down relationship—reason and passion; human and non-human. 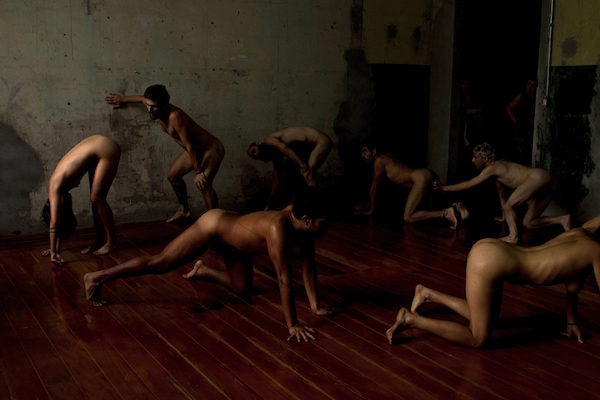 As a performance which tests the limits of each society—the degree to which it subscribes itself to the Enlightenment thought—when performing in Brazil, the audience of the affluent and more European part of the country such as São Paulo chose to restrain themselves and showed no emotions towards this enactment of social “taboos. This was the contrary for the audience in the northeast region of the country where the audience giggled and laughed and want to be touched by the performers. Belgian audience’s reaction towards the show, according to a female member of the group, was, however, “gauged in the middle:”

As artistic practices from the South, both One Or Several Tigers and Macaquinhos explore the body as a site of control where boundaries between the human and the non-human; the north and the south; the civilized and the uncivilized are delineated and informed by European Enlightenment thought. Both shows sought to unpack and challenge this way of thinking in hopes it can lead to a fairer and better society where Europe is forced to look at itself again, especially on how it has constructed itself on the notion of the other in numerous levels. KFDA framed these two complementary shows in the way that defines cosmopolitanism as a condition where differences are respected without any installation of a (new) hegemony—a place where the self-centeredness is tested at all times.

This article originally appeared in Etcetera on June 1, 2018, and has been reposted with permission.