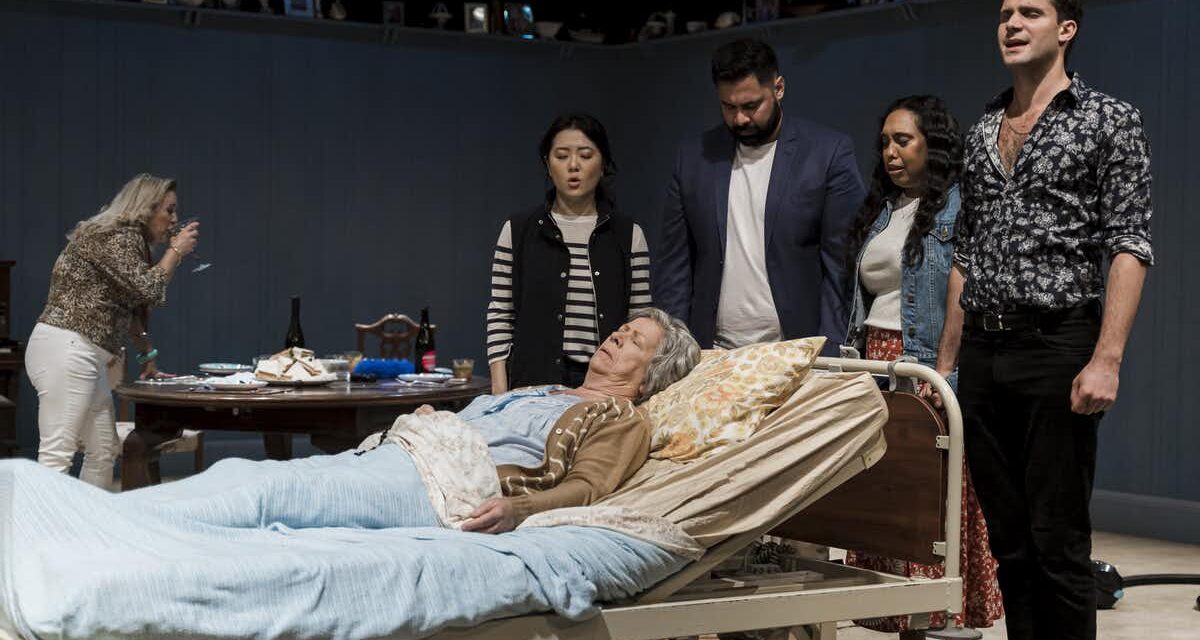 When the family is brought together, all of their madness and rituals are on display. Luke Currie Richardson/Belvoir.

Tucked away at the back of the program for Kodie Bedford’s first play Cursed! is a blurb on Belvoir, mentioning how the company has “faith in humanity.”

What has humanity been doing in recent times, you might ask, to be deserving of faith? Yet this seems precisely the point of theatre: challenge cynicism, build connections.

I didn’t understand what had been missing until I was reminded at the opening of this vibrant and crucial play by a talented new voice.

Cursed! is a full-body comedy experience, gathering the cast into tempests of craziness, as if they were being animated by the gut-busting Southerly wind that pummels Geraldton and – to paraphrase the magnificent Dawn (Sacha Horler) – gives everyone the shits.

Stephen Curtis’ impressive set design sees a blue wall-papered flock-carpeted room with a dinner table. There is a beam of light, as if from a lighthouse, circling the stage and carrying visible smoke from the sweet-smelling smoke machine. A 1980s pop anthem plays from a beat-box atop a piano. Carefully ordered trinkets and snapshots. Everything is significant.

The play begins with Bernadette (wonderfully played by Chenoa Deemal) hitting us with the sharp wit which characterizes Bedford’s brilliant comic writing. Everything is complicated in Sydney, including the racism, she says, so she has come to miss Geraldton, WA, where someone will just call you a “black cunt.” This outrageous saying of what can’t otherwise be said characterizes comedy.

Bedford talks about “good madness” in her program note: the kind of madness that sees the truth but makes it funny, and so, like magic, can tell people things they might otherwise refuse to hear.

The audience laughs in disbelief when Bernadette makes her racism joke, but howls in a kind of ecstasy when Bernadette’s prim half-Chinese sister Marie (Shirong Wu) overcomes her aversion of the “c-word” to spit the insult out at Bernadette during the play’s climax, as the children play out mock battles that serve to affirm their connections.

Bernadette is called back to Geraldton to gather with the “crazy white side” of her family around their dying grandmother, Nan (Valerie Bader). Benadette’s mother, Dawn, has suffered mental illness since the birth of her first child, Sebastian (Alex Stylianou), who says she has gone through “a lot of colored cock” mothering her three children to Maltese, Aboriginal, and Chinese fathers.

Demonstrating Bedford’s skillful and dramatic irony, Sebastian comes out as gay as soon as he appears on stage, but only fesses up to it while mistaking Bernadette’s long-suffering fiancé Izzy (Bjorn Stewart) for a “butt slut” Grindr date. Sebastian tries to renounce his gay sin while praying on Nan’s deathbed, and Catholicism’s strictures, hypocrisies and Nan’s sincerity as a rare “good Catholic” are a source of arch humour throughout.

The fragile family Nan has held together gather around her deathbed, with Izzy brought into the fold. Through Izzy, Bedford shows us the insane rituals the family have invented to hold themselves together.

So too, one must beware of Dawn’s mock funerals, in which every family member is given a role – the funeral song, the eulogy – as Dawn lies in state on the dining table.

As an undercurrent to the madness, Bedford offers symbols that gnaw at us.

Bernadette is haunted by a talk she prepared as a six-year-old on the horrific trauma of the wreck of the Batavia off the coast of Geraldton, where Dutch castaways descended into murderous madness.

Neither Nan (cursed by the fear of leaving the house) nor Dawn (cursed by insanity and committed) could attend her talk, and it causes a crisis for the young Bernadette.

This image returns to Bernadette again and again. She struggles with the fear she and her siblings are cursed to go mad like their mother; the fear she will be unable to cope with the responsibility of holding the family together once Nan dies.

Bad madness – to contrast Bedford’s good madness – is a dissolution or violence, a breaking of connections, and it serves as an understated symbol of colonial Australia.

But her good madness somehow holds things together in a glue of insanity, where the truths of colonial Australia’s violent dispossession of Aboriginal peoples is always on the surface, repurposed as jokes.

The play began with loud applause from the masked and socially-distant audience, ending with a standing ovation. A shy Bedford had to be urged to her feet by director Jason Klarwein, who shares the triumph, as the cast called her out of hiding.

She might have to get used to the attention.

Cursed! plays at Belvoir until November 29.

This article was originally published to theconversation.com on October 30, 2020, and has been reposted with permission. For the original article, click here.