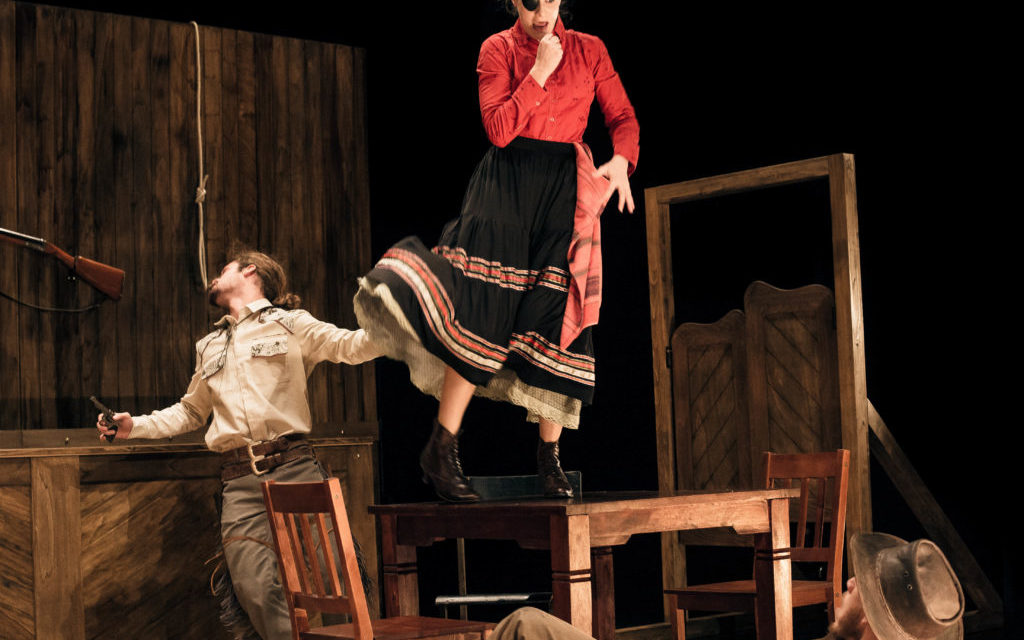 New York-based experimental troupe Nature Theater of Oklahoma (NTO) teams up with Slovenia’s EnKnapGroup dance company in Pursuit Of Happiness, an uneven performance presented as part of the Public Theater’s Under the Radar festival.

Pursuit offers a deconstruction of the Hollywood cowboy mythos in all its John Ford glory, as well as a deconstruction of Vietnam era war pics. Concept, text, and directing credits are shared by Pavol Liška and Kelly Copper, in a co-production by Théâtre de la Ville and steirischer herbst.

The current political climate highlighting transgressions by powerful men towards mostly female victims seems a ripe time for a reappraisal of macho stereotypes on a New York stage. That the show is only intermittently successful it speaks to the necessity for precision and focus in the pursuit of satire.

Upon arrival, the audience is greeted with a lengthy Western-style bar composed of lightly colored wooden panels decorated with evocative signs and moody under lighting. The action begins as a wry pantomime between two men riffing on the taciturn bar patron sliding his shot glass repeatedly back to the bartender, stage right. The house lights remain on for the performance, a nod to NTO’s experimental charter. Both actors sport large cowboy hats and check shirts, part of the colorful yet restrained costume design by Katarina Škaper.

Soon another performer joins in the Buster Keaton-inspired hijinks. This whimsical opening helps establish Pursuit’s commitment to absurdity. The show’s chief strengths include insightful dialogue which is projected as supertitles at the top of the stage, and kinetic movement, often featuring vivid sound effects. Given the actors’ thick pan-European accents (actors hail from countries including Belgium and Sweden) the script wisely hews to an ironic tone and the actors to heightened, Kabuki-style facial expressions.

Would that the remainder of the show retained this emphasis on subtle humor instead of resorting to an ill-conceived second act foray to the Middle East. The Baghdad section consists of one actor narrating the action in an overlong monologue while sharing the stage with the ensemble of five other actors. A more effective dramaturgical device would’ve been to rely on the performers’ superior movement skills to convey plot, mirroring the success of act one.

This second act succumbs to an over-reliance on the humor of repetition by name dropping Red Bull to the point of tedium. Likewise, the deployment of a fog machine, overused when other elements like video projections would have offered more variety and visual dimension. The show ultimately devolves into cheap laughs over war casualties, the evening’s nadir.

The overuse of Samuel Barber’s Adagio With Strings is another recurring motif that seeks to mock war pic heroics a la Platoon which used the same music to stirring effect. At these moments one is left pondering the wisdom of substituting broad humor for emotional catharsis. The retrograde heroics of fictionalized Hollywood cowboys proves a more effective target for humor than earnest soldiers fighting a non-fiction war.

Ultimately Pursuit plays like a dance theater mashup that doesn’t gel. This overlong performance plays like two shows shoved uneasily together, like the reluctant children of overly zealous matchmaking parents. Pursuit has its experimental theater heart in the right place, with its nod to the innovative work of Britain’s venerated Complicité by way of performance pioneer Jacques Lecoq. What it lacks is sufficient rigor to prune act two which would render Pursuit a happy experience.

The Pursuit of Happiness is a selection of the Public Theater’s Under the Radar Festival in New York City.