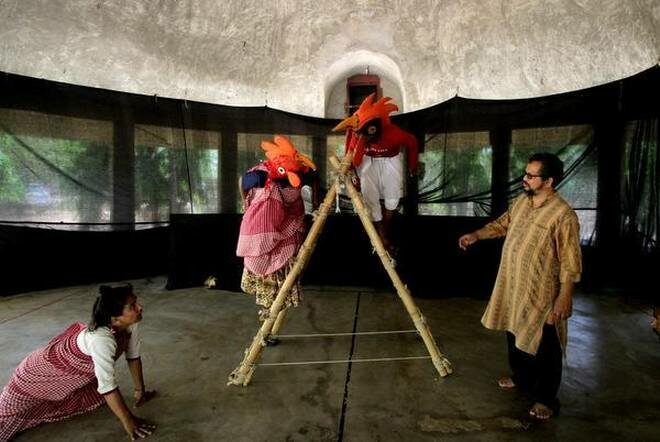 Members of theatre group Natya Chetana travel to villages teasing out stories from the everyday lives of the people they meet.

Imagine cycling thousands of kilometers along bumpy roads, camping wherever the day’s journey ends, picking up untutored talents from remote villages, delving into people’s lives to ferret out true stories, and shaping them all into plays. Natya Chetana, an Odisha-based theatre group, has been doing just that for 33 long years under the aegis of Subodh Patnaik.

Set up in 1986 with the objective of reviving cultural roots and highlighting socio-political themes, Natya Chetana recently staged its 79th play.

“Of the 79 plays, 65 are original stories and the rest are adaptations. The stories have been discovered during the course of interactions with villagers, passersby and the faceless people we have met during cycling expeditions,” says Patnaik.

After graduating from Utkal Sangeet Mahavidyalaya, Odisha’s premier college of performing arts, Patnaik took it upon himself to accumulate stories from villages.

“Villagers are more creative, more relaxed and culturally richer than urban elites or the so-called educated people. We value villages as our theatre bank,” says the director, who is influenced by Badal Sircar. Like Sircar, Patnaik is a firm believer in the theatre’s power to bring social change.

The Natya Chetana plays are chiefly of two types: the ‘cyco theatre’, which is 35-40 minutes long, and the ‘intimate theatre’ for townships, which lasts longer.

For cyco theatre, the artists cycle to remote villages and land up there unannounced to hold long discussions with villagers on the problems plaguing them. They take with them short plays, which are performed mostly during the daytime, with bamboos, sticks and roped used for stage sets. The group has staged 50 cyco plays so far. Intimate theatre often takes up the stories of the cyco plays, urging urban audiences to think through and question what they see.

Even while working to highlight social issues, Natya Chetana has taken care to distance itself from government awareness programs so that it doesn’t become a propaganda tool. The group firmly believes in artistic freedom.

Patnaik says, “With the total saving of ₹84,000 in 1991, we had set out in search of five acres of land to establish a village where artists will have complete freedom and will be guided only be our own rules. It led us to a remote Sialia village on the outskirts of Bhubaneswar. Thus, Natya Gram (theatre village) was created.” Today, 20 to 30 budding artists can be found rehearsing plays in the village on any given day.

Some of the stories Patnaik has written and directed have now become the stuff of legend. Tangia Chhap (“The Symbol is the Axe”) is about an unemployed tribal youth struggling to earn enough so that he can take his sweetheart along with him. By the time the protagonist reached his fiancees home with money, she has been starved to death in Kalahandi.

“We stumbled upon the central character of the play during our cycle expedition in 1996. While we were resting in a village, somebody told us about a drought victim and his tragic love affair. The story stirred us so much that we visited his village a couple more times more to fine-tune the script,” recalls Patnaik.

Katha (“the Wood”) is the story of a firewood collector from Kandhamal. “While passing by a slum in Bhubaneswar in 1995, I heard a woman crying. I found that she had all the ingredients to cook a meal, except firewood. It had gotten dark by the time she came home; it was too late to gather wood or buy it- and custom in coastal Odisha forbids anyone from selling firewood after dark,” Patnaik tells the story.

The woman, also from Kandhamal, had been a firewood seller herself, but had migrated to Bhubaneswar in search of a better life. Katha tells the story of her life and displacement.

Patnaik’s repertoire is full of such stories which provoke the audience and make them identify with people from social backgrounds very different from theirs.

But how does Patnaik pull it off? Who are his foot soldiers? “We do not get a constant flow of trained artists? We cannot afford to compensate them either. It was this that drove us to look for raw talent, hone skills, and empower them in the process,” he says.

Convincing parents to send their girls on cycle expeditions and act in plays was not easy. “To dispel any misgivings, I took my sister along on one of the expeditions. When parents saw a girl traveling about nonchalantly and acting in plays, they started sending girls too. It made all the difference,” says Patnaik.

Manini, 19, a school dropout from a Kandhamal is part of Natya Chetana. She would have been collecting produce from the forests if she had not found a place in Natya Gram. It is difficult to imagine Manini playing mother to Mahatma Gandhi in the play Tyagi, but that is exactly what she did. With her limited knowledge of Odiya, the girl who had never stepped outside her village till then traveled to Bhubaneswar with the troupe and gave a rousing performance.

Raghunath Soren, a 20-year-old college dropout from Keonjhar, has rediscovered himself through Natya Chetana. “I would have been just one of those people roaming about in the village had I not got the address of Natya Gram. Now I am studying hard to get into the National School of Drama,” says Soren.

This article was posted with permission from thehindu.com and was originally published on June 1st, 2019. 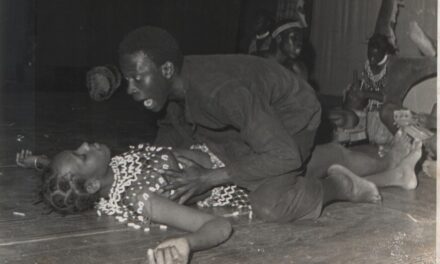