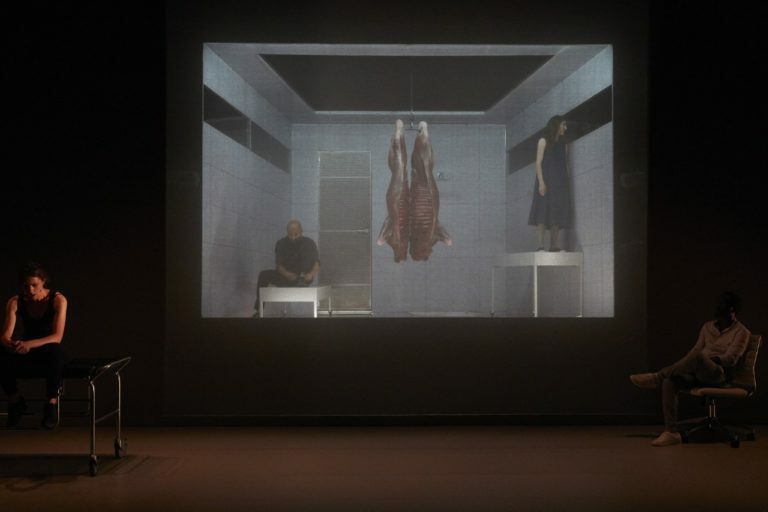 Following the themes of the Avignon 2019, Alexandra Badea’s Points de non-retour [Quais de Seine], a second part of the trilogy that Badea developed during her residency at the Théâtre de la Colline under the patronage of Wajdi Mouawad and his longstanding collaborator and dramaturge Charlotte Farcet, connects current European migration to the history of its colonial wars and oppression.

Unlike the first part, Thiaroye, that focused on the 1994 massacre of  Senegalese infantrymen in Thiaroye reflected in the stories of its fictional characters Biram and Régis the descendants of the massacre’s victims, Quais de Seine focuses on Nora, a young journalist from France, and a connecting protagonist of the trilogy. It gives Nora (played by Sophie Verbeeck) a chance to find the truth about her own family, to uncover silence that surrounds the disappearance of her father, the absence of her grandfather and the secret origin of her own name.

Based on the recent history of France, the trilogy is also personal to Badea. A French writer of Romanian origin, Alexandra Badea came to France in 2003 to practice her French writing skills. A naturalized citizen since 2013, Badea remains highly sensitive to the questions of responsibility that comes with the privilege of holding citizenship. To Badea, the right of citizenship imposes a moral duty, as holding citizenship invites the artist to better understand the official history of the country she now belongs to and that of the people whose stories do not appear in this country’s authorized narratives or history books. These untold, forgotten or purposefully silences stories that make the history of French colonial invasions in sub-Saharan Africa, the massacre in Thiaroye, and the Algerian war of independence, are in the center of dramatic focus in Points de non-retour.

A dedicated follower of Wajdi Mouwad’s aesthetics, in Quais de Seine, Badea uses a dramaturgical device of joining historical past and fictional present to represent the disjointed state of Nora’s consciousness. Visually, she breaks the stage into two simultaneous areas- the space of the present, where Nora holds sessions with her therapist; and the space of the past, in which the story of love and betrayal that preceded the birth of Nora’s grandfather unfolds. Although directorially Badea’s staging is a bit repetitive and even stilted with the action constantly moving back and forth between these two spaces of action, the dialogue keeps the story going forward. In the end, Nora finds the family album that her grandmother kept in secret and beings to pace the missing history of her family using facts, intuition, and creative imagination much like the author herself would do.

As Badea explains, her theatre does not necessarily follow the traditions of testimonial or documentary performance. It is as poetic and metaphorical as the story she wants to tell might require. Although making Quais de Seine involved extensive research and personal interviews with the participants and witnesses of the Algerian War- Badea used the audience networks of Théâtre de la Colline to interview people who had personal history with this war, including “pieds-noirs, Algerians, children and grandchildren of French soldiers who retreated into silence” -the story she tells reveals the writer’s personal point of view on the war and the October 17th, 1961 massacre, when French police crushed the peaceful demonstration of Algerian war protesters. The play and the process of its creative making serve Badea’s mission to pay homage to the disappeared and to restore intergenerational memory.

“The figure of the disappeared,” Badea explains, “has always been at the heart of my writing. What moves me deeply is to know how people build their identities around a missing story, a story in which a member of the family constellation was erased. How we can invent and give an identity to someone who couldn’t pass on the history of their origins.” Point de non-retour [Quais de Seine] presents an example of such historical storytelling and provides its protagonist, Nora, with the poetic license to re-imagine the past and re-invent the story of the vanished.

This artistic position, however, can be quite troubling, ethically and morally. Unlike the practice of testimonial or documentary writing, fictionalization of the past can be dangerous as it can lead to its falsification, glorification and even sentimentalizing. It can also help to manipulate the present, a familiar gesture of many populist narratives. Badea seems to be aware of this issue; still, the question remains open- to what extent is an artist allowed to manipulate history even if in this motion of invention there is an ethical desire to uncover its hidden truths?

This article was reposted with permission from capiticalcriticscircle.com. It was originally published on July 6th, 2019.