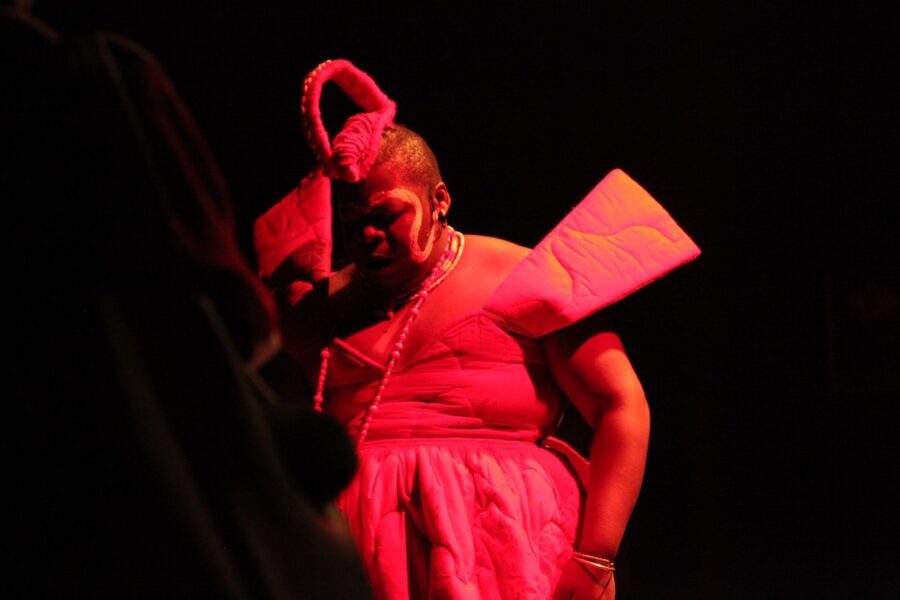 The Red Femicycle brings into sharp focus Gender-Based Violence in a gut-wrenching and hard-hitting way! The Red Femicyle is not a production for the fainthearted, why should it be for it is not depicting fictional occurrences in some far far-away place but the shameful, stark reality of a nation at war with women as evidenced by the almost daily news headlines of femicide.

It is a foolish yet necessary exercise to attempt to box The Red Femicycle from a traditional genre-specific framework (as all reviews tend to do), yet this aural, visual multi-sensory masterpiece simply defies all of what we think we know of a production as well as what it should be or do.

It does not shy away from tackling matters head-on without hiding behind worn out theatrical conventions as one experiences from the onset when the action ‘starts before it starts’ through a confrontation instigated by one of the actors to the unsuspecting audience.

The Red Femicyle takes place in multiple spaces almost following a journey-motif. It is part ritual, part performance art, part theatre infused with live music, part digital spectacle, part art exhibition yet even all these labels are wholly inadequate to highlight how it utilizes multiple elements to bring into sharp focus Gender-Based Violence in a gut-wrenching and hard-hitting way!

Featuring the inimitable Ibokwe (Albert Silindokuhle Khoza) this world-acclaimed production refuses to parrot tired slogans like ‘real men don’t rape’ to unequivocally state that any and all men can and do commit violence whether sexual, emotional, physical, and otherwise and we have to confront this fact so that we can begin to find the tough solutions required.

Perhaps beyond tougher legislation and wholesale change of attitudes by MEN towards women’s bodies, it is productions like The Red Femicycle that are needed for this time when Gender-Based Violence is escalating daily.  If beyond all other strategies to mitigate Gender-Based Violence, then productions such as this could be what finally jolts us all to collective action and to realizing that we all have a part to play to not perpetrate, to prevent, to report and support victims of Gender-Based Violence.

As the nation and world once again commemorate the 16 Days of Activism Against Gender-Based Violence campaign, The Red Femicycle is a reminder that it is not enough to set aside only a few days to deal with something women experience and live with every day which is fear that they could be next.

The Red Femicycle is, therefore, a call to action, real, robust, difficult, and necessary to stem this pandemic – because Gender-Based Violence is as much a pandemic as the pandemics before and those the world faces now – and the fact that Gender-Based Violence is not limited by geography, race, creed, religious orientation, class or any other man-made markers this is what must finally make it first on each and every agenda so that it can finally get the attention it requires and action needed to decrease and eventually eliminate it.

In the end, as the Shona saying goes, ini newe tine basa (you and I, we have work to do) when it comes to Gender-Based Violence.

‘The Red Femicycle’ featuring Ibokwe Khoza, Oupa Sibeko, Lerato Matolodi and Musa Zwane was on at the Soweto Theatre from 6-8 November 2020 and 1-2 December 2020.

This article was originally posted in The African Theatre Magazine on November 26, 2020 and has been reposted with permission. To read the original article, click here.