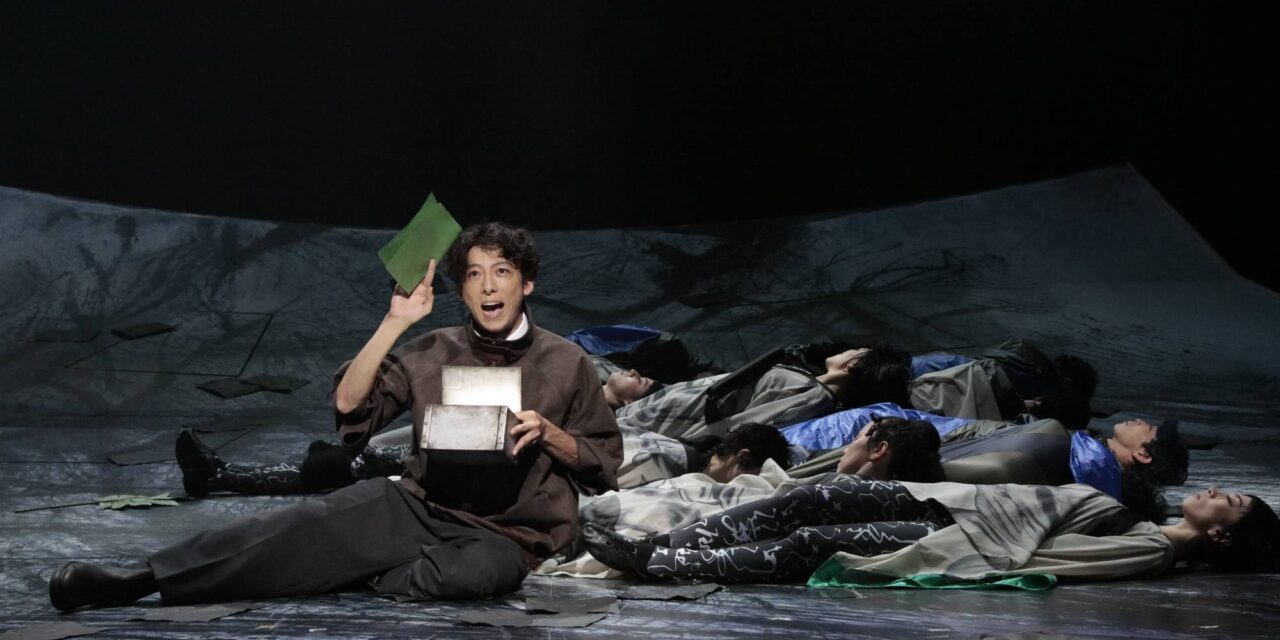 Issey Takahashi stands out as a dapper salaryman who sets out to solve a mystery in Hideki Noda’s new play, “Fakespeare.” PC: Kishin Shinoyama.

William Shakespeare is one of the world’s most influential playwrights, but his life continues to be shrouded in mystery. Since his death in 1616 at the age of 52, no handwritten manuscripts have ever surfaced, and even his six supposed signatures all spell his name differently.

According to the English playwright Sir Mark Rylance — the first artistic director of Shakespeare’s Globe theater in London, a replica of the Bard’s original stage — all that may have been part of the dramatist’s lifelong performance.

“Shakespeare shakes you. The spear of his imagination shakes you, and the story shakes you,” Rylance told The Japan Times during an interview in 2001. “The first time his name was published for his first poem, ‘Venus and Adonis,’ he wrote his name as ‘Shake-Speare’ — ‘Will I am Shake-Speare.’ … He knew from classical thought that the Greek goddess of wisdom, Athena, is called the ‘Spear Shaker’ — she has a spear that she shakes at ignorance. She has a mirror that reflects the world — like a play reflects the world. She has a helmet that makes her invisible — like an actor is invisible. And from behind this mirror she shakes this spear at ignorance.”

Playing with the idea of revealing obscured truths comes “Fakespeare,” a new drama that contends with the power of words and determining what is true and what is false, by one of Japan’s leading dramatists, 65-year-old Hideki Noda.

Running through July 11 at Tokyo Metropolitan Theatre in Ikebukuro, where Noda is artistic director, the drama opens with an eerie scene, the stage featuring the distinctive craggy outline of the sacred Mount Osore in Aomori Prefecture. The mountain is known in folklore as an entrance to the afterlife, and this is where Minarai Atai (Kayoko Shiraishi), an old itako — a medium able to channel the spirits of the dead — appears, speaking in a loud, crazed voice about her failings in life.

From there, the protagonists — a dapper salaryman named Mono (Issey Takahashi) and the much older Tano (Isao Hashizume), who is in fact Mono’s son — are trained for no apparent reason by Minarai to embody characters in the death scenes of Shakespeare’s four most famous tragedies: “King Lear,” “Othello,” “Macbeth” and “Hamlet.” A stressed-out Shakespeare in Elizabethan clothes appears intermittently, as does his son, a rapper named Fakespeare (both roles performed by Noda). The two are on a mission to warn people against being taken in by “fake news” and “fake ideas” dispersed across social media platforms.

Later, Mono and Tano are transported from Mount Osore to the forests of Gunma Prefecture, where they go to solve the mystery of a long-lost box. The object they’re searching for turns out to be the black box recorder from Japan Airlines Flight 123. The plane crashed there in 1985, killing all but four of the 524 people on board.

Gradually, Mono’s and Tano’s unlikely identities come into focus as the play’s scattered episodes begin to make more sense. In one of the final climactic scenes, the words emanating from that voice recorder shake everyone to their core.

The plot is complex, but thanks to Noda’s witty wordplay and his clever device of quickly drawing a thin white curtain across the stage and then back again to transform the set in the blink of an eye, what he delivers is riveting entertainment. Also, he uses his so-called ensemble technique to transfigure his cast of 16 young actors into multiple roles, from trees to a flock of crows, or from trainee itako to passengers in the moments before the plane’s impact.

Though he is widely known as a TV drama and film actor, Takahashi’s performance as Mono distinguishes him as an adept stage performer, capable of holding his own among tough and individualistic actors such as Noda, Shiraishi and Hashizume. His graceful and strong presence manages to bind together the whole extraordinary production ahead of the final denouement, leaving the audience shaken and stirred by the power of what’s just beyond comprehension.

“Fakespeare” runs through July 11 at Tokyo Metropolitan Theatre in Toshima Ward, Tokyo. It tours to the Shin Kabuki-za in Osaka from July 15 to 25. For more details, visit www.nodamap.com or www.geigeki.jp.

This article was originally published by The Japan Times on Jun 20, 2021 and has been reposted with permission. To read the original article, click here.