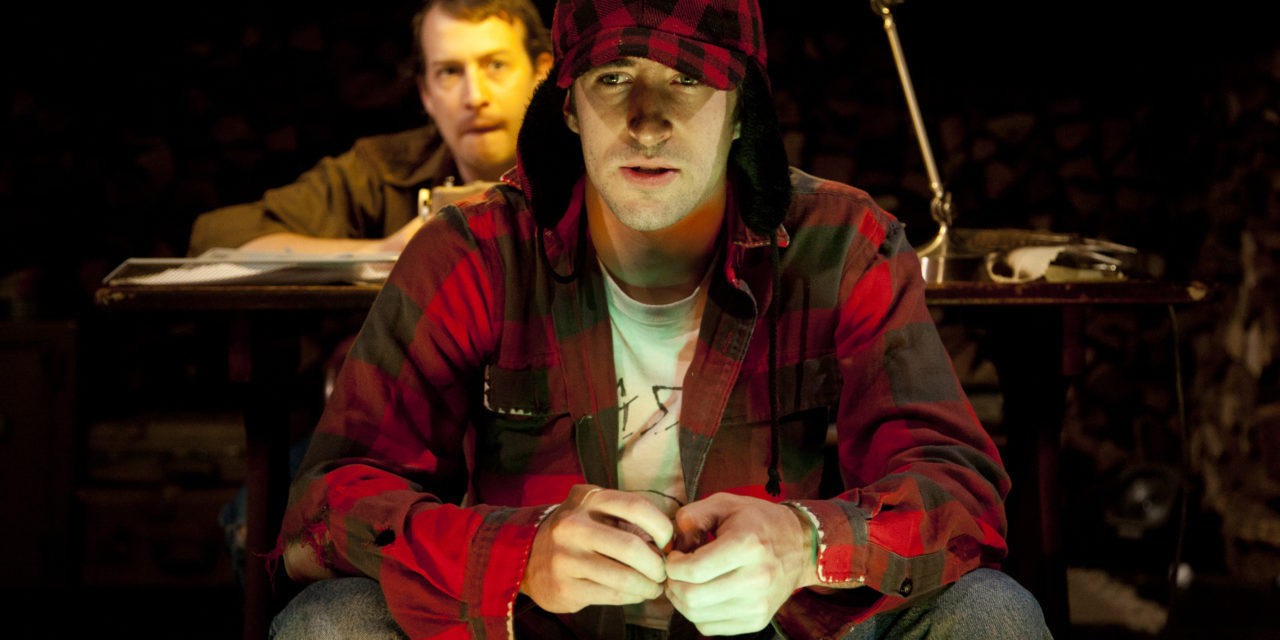 Reading J. D. Salinger’s 1951 The Catcher in the Rye marks the moment in the lives of countless American teenagers when they first experience the uncanny, but existentially reassuring sensation of deeply identifying with a literary character. Freshly expelled from prep school, Holden Caulfield is staring down encroaching adulthood and doesn’t like what he sees. At seventeen, he is a confirmed cynic. The world is full of “phonies” hiding their true depravity behind masks of smiling midcentury conformity, and he is the only one who can see it. Growing up means accepting at least some of the many distasteful compromises civilization requires, and to Holden the tradeoffs simply aren’t worth it. He’s a loner, a disillusioned idealist, a rebel without a cause, or an emotionally stunted sociopath-in-the-making depending on your point of view, which for first-time readers often depends on just how miserable high school is making you the year your English teacher assigns it.

The Catcher in the Rye’s enormous success overwhelmed its author, turning Salinger into a recluse; he fled the spotlight in 1953 and spent the rest of his life on a remote compound in New Hampshire, continuing to write, but largely refusing to publish. Holden takes place in Salinger’s bunker-like writing cabin on this compound, but in Anissa George’s imagined version of the author’s sanctuary, the solitary genius is not so solitary. When the play opens there are four men curled up asleep in this no-frills hideout, one on a folding cot, three on the floor, like refugees, or fugitives, or survivalists awaiting doomsday. One of bodies stirs and a young man slowly rises and creeps over to the writing desk in the middle of the room, where he begins copying out on a typewriter, word for word, the text of The Catcher in the Rye. He turns out to be John Hinckley, the man who attempted to assassinate President Ronald Reagan in order to attract the attention of Jodie Foster, on whom he’d became fixated after seeing her play a teenage prostitute in Martin Scorsese’s Taxi Driver. Bunking with him is Mark Chapman, who shot and killed John Lennon. What the two have in common is an obsession with Catcher (both men were found with copies of the novel on them after their homicidal exploits).

Salinger himself is in the cot, reliving his memories of WWII in nightmares. When day breaks, a familiar routine sets in. Salinger labors over his latest book, while his acolytes hover over his shoulders, goading him on, imploring him to get to an ending, and then to publish rather than locking yet another manuscript away in the safe. They help organize his chapter drafts. They also antically help enact scenes from Salinger’s wartime experiences. These surreal interludes, in which the killers function less as autonomous characters and more as symptoms of the author’s PTSD, make the question of reality a slippery one in the play. Are these superfans here of their own free will? To sit at the feet of the master? Touch the hem of his garment? Salinger barely seems to notice that he has company. Only when he leaves the bunker, the door automatically locking behind him, do we learn that his groupies are also prisoners. But on some level, though he is the least voluble character by a wide measure, Holden is a monodrama for Salinger, a mental echo chamber in which the killings he was directly responsible for as a soldier mingle with the killings he might have been indirectly responsible for as a writer. 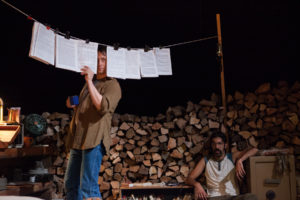 The fourth of Holden’s strange bedfellows is a newcomer named Zev who doesn’t fit the pattern. When questioned about his Catcher connection, he insouciantly admits that he “couldn’t get into it” when they tried to make him read the book in school. Hinckley and Chapman’s jaws drop; his apathy towards the sacred text is not something they can wrap their heads around. More offensive still is Zev’s assessment of Holden: “No offense, guys, but he’s kind of a loser, isn’t he?”

Searching for some common ground, the assassins discover that, like them, Zev harbors murderous impulses. But he isn’t interested in mulling over the who of a hypothetical massacre, only the how: “I don’t like people,” he says, “I like maps.” Zev thinks in terms of logistics, entrances, and exits, how to trap as many people as possible in an enclosed space, like a theater. He thinks in terms of numbers, speaking approvingly of Anders Breivik, the Norwegian mass murderer who shot 69 Workers’ Youth League summer camp participants in 2011. Zev admires Breivik not because he feels any ideological affinity with the right-wing Norwegian mass murderer, but because Breivik holds the world record for shooting deaths, and was shrewd enough to choose a small island for his ground zero, leaving nowhere for his victims to run. However delusional they were, Hinckley and Chapman took up arms for love, of an idea, of a woman, and they are appalled by Zev’s cold logic. He has no real motive, but this makes him more terrifying, not less. When he escapes from the bunker at the end of the play, it seems like a foregone conclusion that we will soon be reading about his attempt to break Breivik’s record. 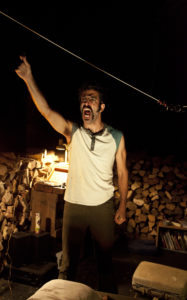 Hours before I attended Holden, Esteban Santiago had retrieved a gun from his checked luggage and opened fire at the Fort Lauderdale airport, killing five people. Early reports revealed no specific rationale aside from a disappointing end to a military career and a history of mental illness. White supremacist Dylann Roof was in a Charleston courtroom, insisting that he felt no remorse for shooting nine African-Americans dead in a church in 2015. “I did what I thought would make the biggest wave,” it had recently been made public that he wrote from jail, “and now the fate of our race is in the hands of my brothers who continue to live freely.” Some mass murderers pledge allegiance to ISIS, like Omar Mateen, who killed 49 people at the Orlando gay nightclub Pulse in 2016. Some leave behind lengthy manifestos, like Elliot Rodger, who killed six in Isla Vista, California in 2014 because he was frustrated that none of the pretty blonde sorority girls would give him the sexual gratification he felt entitled to.

Aside from the fact that such attacks are almost always perpetrated by men not too much older than Holden Caulfield there is little they share but their rage and alienation. Many belong to the category German writer Hans Magnus Enzensberger calls “radical losers,” an appellation that Zev would likely find galling. Enzensberger writes that “because of the way humanity has organized itself—‘capitalism,’ ‘competition,’ ‘empire,’ globalization’—not only does the number of losers increase every day, but as in any large group, fragmentation soon sets in.” Isolated young men who have suffered personal setbacks of one form or another sublimate their anger at the universe by conflating (not always incorrectly) their individual misery with perceived systemic injustices. When they make the leap to begin slaughtering people in the name of their coopted cause these radical losers become symbols, martyrs, heroes, rather than petty failures. 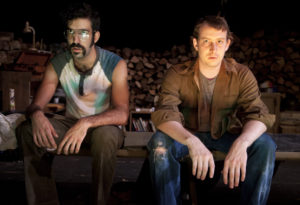 George declines to diagnose the Holden Caulfields of the world as “losers,” radical or otherwise. Rather, her play asks us to consider the psychological contradictions American men must negotiate when born into a society that valorizes aggressive masculinity to the point where the social ideal is itself anti-social. Combine this volatile situation with America’s outrageously lax gun control laws and watch the bodies predictably pile up. Combine with Trump, alpha-male id personified, and permanently holing up in a bunker begins to appear an attractive lifestyle choice.

Midway through Holden, we learn that Hinckley, Chapman, and Zev all fancy themselves writers as well. We are treated to a sample of their prose and poetic stylings read aloud by their authors with trembling vulnerability and the painfully obvious need for recognition and affirmation. They are terrible writers. In this moment we see them not as killers but as young men, like Holden, struggling mightily with emotions they lack the language to express, with a loneliness they lack the tools to overcome. Unable to create, they turn to destruction to broadcast their pain to the world. Holden renders articulate what is too often wasted in mute violence. 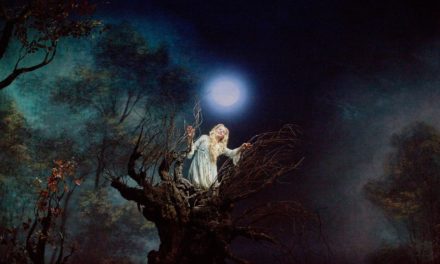