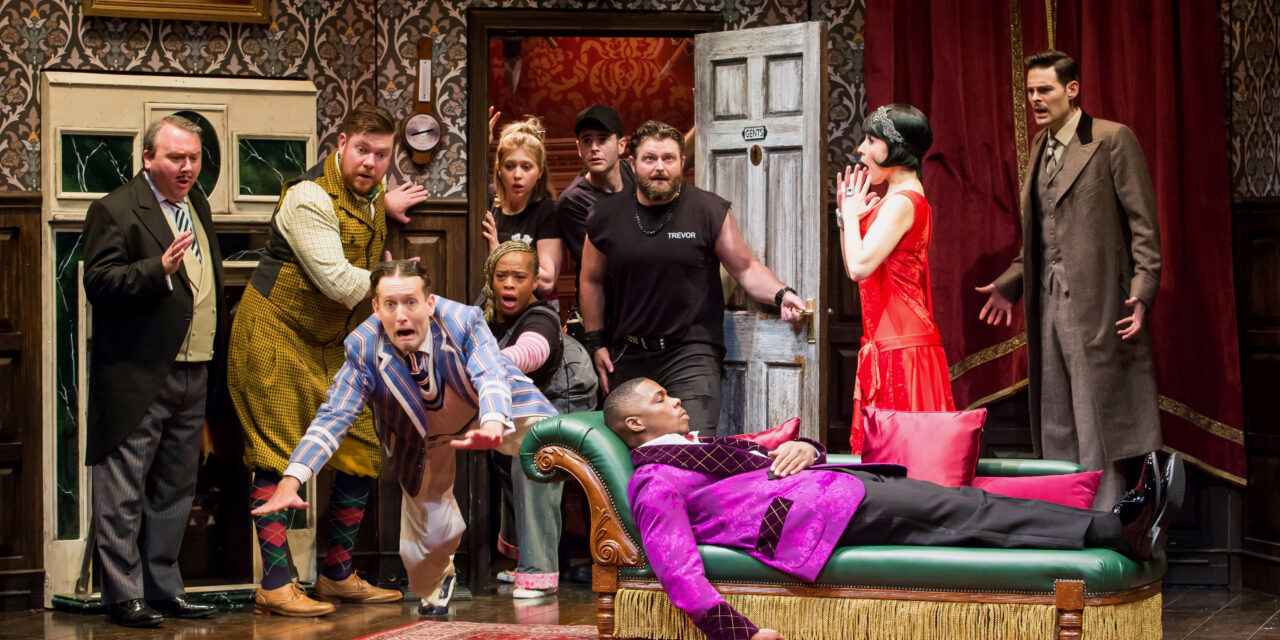 The company of the national tour of "The Play That Goes Wrong". Photo by Jeremy Daniel.

If you are in Los Angeles and find yourself in need of a good laugh, Center Theatre Group has you covered with the national tour of The Play That Goes Wrong, co-written by Mischief Theatre company members Henry Lewis, Jonathan Sayer, and Henry Shields.  The tour is directed by Matt DiCarlo with original Broadway direction by Mark Bell, featuring set design by Nigel Hook, lighting design by Ric Mountjoy, sound design by Andy Johnson and costume design by Roberto Surace… though if you get a look at the program you are ‘actually’ there to see The Cornley University Drama Society’s production of The Murder at Haversham Manor [made possible by ‘the British-American Cultural Exchange Program’]. 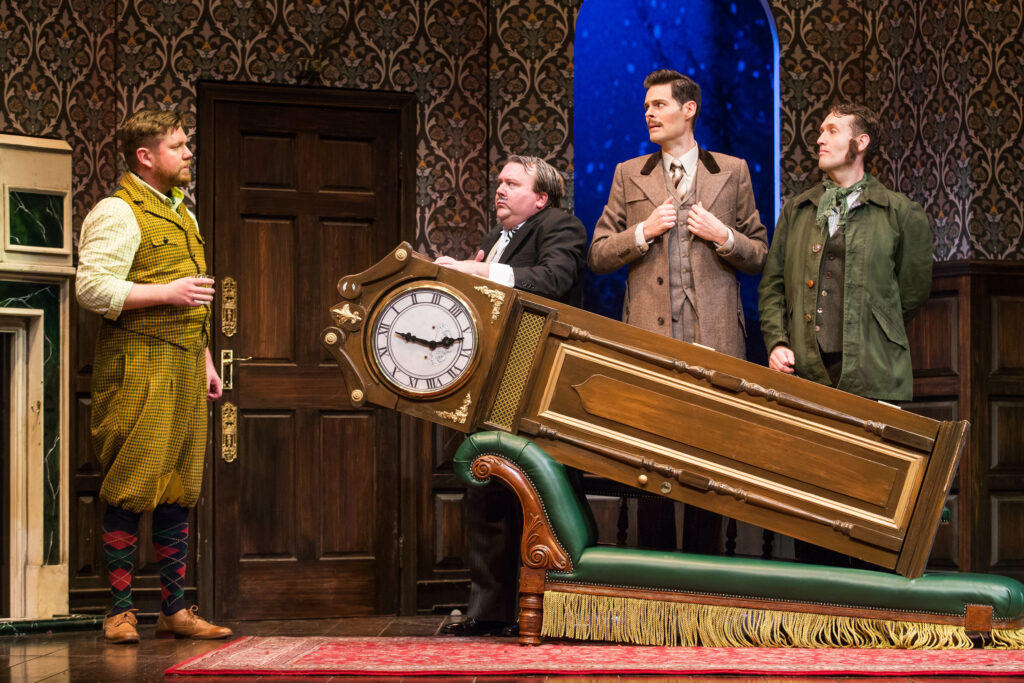 The play within the play is a 1920s murder mystery featuring seven characters played by six cast members but that’s only counting the ones that are meant to be on stage.  In addition to the actors, there are six stagehands, two of which end up in the spotlight a lot more often than one might usually expect.  We have the character Chris Bean to thank for the disaster that unravels before our eyes.  He is credited in the program as not only playing Inspector Carter but also as the director, designer, costume designer, prop maker, box office manager, press & PR contact, dramaturg, voice coach, dialect coach, fight choreographer and as the rehearsal actor for a role that does not appear in the play.

There is a missing dog and a mantlepiece that will not stay on the wall no matter how much duct tape is employed in the effort.  Curtains open when they shouldn’t and fall when it is least convenient, the elevator breaks, an actor is knocked unconscious and must be replaced by the stage manager who is on book.  Props are mislaid, things catch on fire that should not and other things that should fail completely.  In other words, it’s every small-town community and/or college theatrical mishap melded into one wonderful display of comic timing and courage in the face of dramatic disaster. 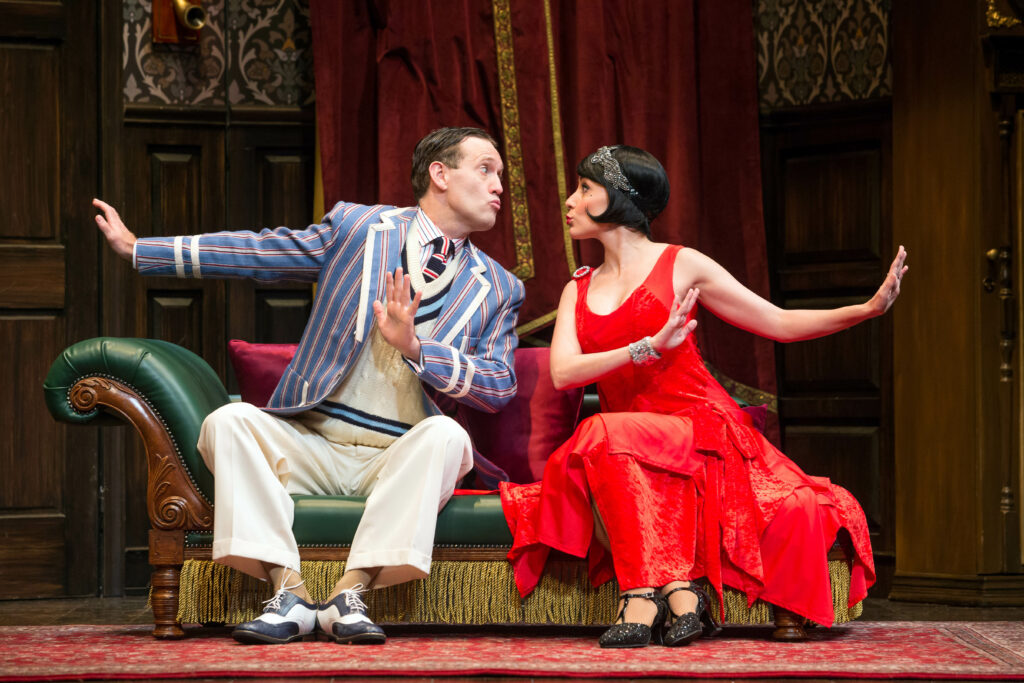 Evan Alexander Smith plays Chris Bean (who plays the Inspector, see above) and from the moment he steps on stage to welcome us to his directorial debut, it’s tempting to assess the set with an eye to predicting what might fall apart first if you haven’t already been doing so.  Yaegel T. Welch plays Jonathan Harris, who plays murder victim Charles Haversham and while doing so endures a number of delightful indignities.  Scott Cote plays Dennis Tyde, who plays Haversham’s butler Perkins, not the brightest character in the play but one who keeps his fellow thespians on his toes with his mispronunciations of words scribbled on his palms and his accidental misuse of whiskey.  Peyton Crim plays Robert Grove who plays Thomas Colleymoore, the brother of Haversham’s fiancee.  Thomas and Perkins discover the body, but only after they are forced to navigate through the wings, around a locked door.

Jamie Ann Romero is Sandra Wilkinson who plays Florence Colleymoore and though her talent for physical comedy is clear in everything she does, she becomes the centerpiece for one of the more ridiculous and hilarious beats that must be seen to be believed.  Ned Noyes is Max Bennett who plays Cecil Haversham, Charles’ brother.  Cecil is one of those actors who cannot help but delight at the sound of applause and therefore feels compelled to seek it out no matter what else is going on around him.  He is a particular foil for straight man Thomas Colleymoore, who seems incapable of improving even when the lines he memorized no longer make any sense in relation to what is unfolding.  It’s a common ‘problem’ in the play, but Thomas (Peyton Crim – the multiple roles are easier to follow during the show, promise) takes it to an extreme degree that defies logic in a gleeful way. 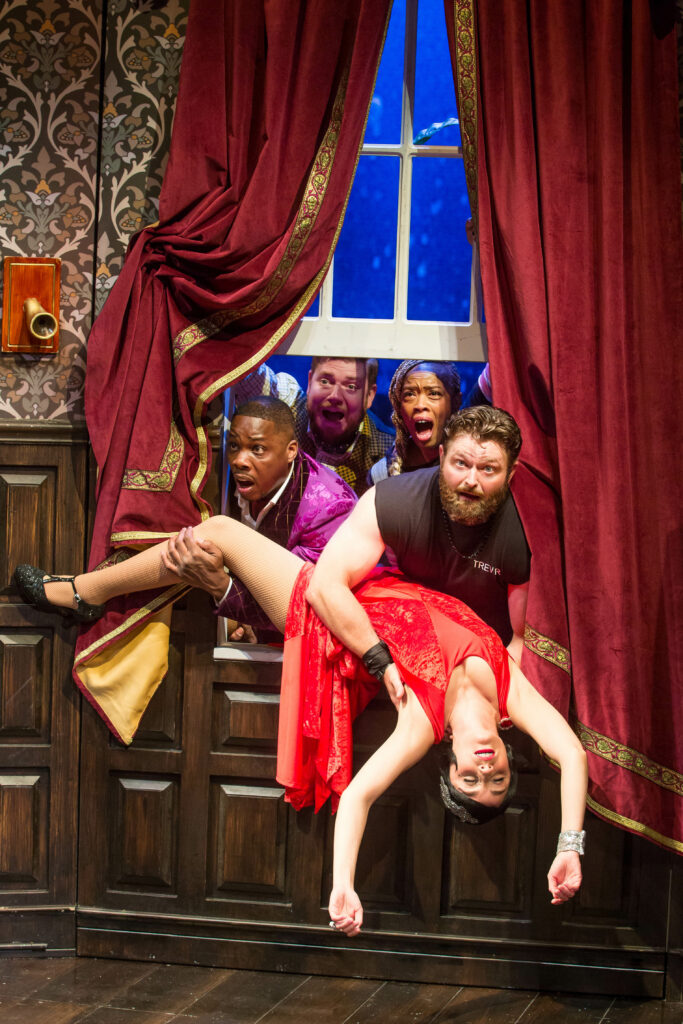 There are two crew members who take on more of a role over the course of the play than either want at first.  Brandon J. Ellis plays the Lighting & Sound Operator Trevor Watson, a strong yet detached presence.  He gets most of his cues right, the ones that misfire are wonderfully out of place and if you attend the show, please be sure to give him back his Duran Duran CD box set, if you find it.  Angela Grovey plays the Stage Manager, Annie – and though she starts out wanting to hide from the crowd, once she gets a taste of the spotlight due to a series of hysterically unfortunate events, it’s hard to drag her away from it and we all benefit from her efforts.

It would be interesting to poll the audience upon exiting, for I ended up speaking with three theatre-savvy people (one woman, two men) and the men were not nearly as convinced by the play.  They felt the jokes were forced at times and the kind of drive to stick to the script no matter what that we see in Thomas Colleymoore did not seem earned to them.  We women found most of what bothered them quite funny.  If you’ve ever done theatre (and everyone should, at some point in their lives in my opinion), you’ve lived through one of the moments this play depicts and it feels wonderful to be able to laugh at that moment of panic and pain.  The Play That Goes Wrong takes no prisoners and never apologizes for being as outlandish and over the top as ‘play’ can get.  We ought to thank them for giving us a good laugh, especially at ourselves.

“The Play That Goes Wrong” is produced on Broadway by Kevin McCollum, J.J. Abrams, Kenny Wax, Stage Presence Ltd., Catherine Schreiber, Ken Davenport, Double Gemini Productions / deRoy-Brunish, Damian Arnold / TC Beech, Greenleaf Productions / Bard-Roth, Martian Entertainment / Jack Lane / John Yonover, and Lucas McMahon.  I wouldn’t have known it without reading the press release but the show started out at a London fringe venue and now plays to millions of people around the world – congratulations to the creators for their success.  Mischief Theatre is an Olivier Award-winning theatre company led by Artistic Director Henry Lewis and Company Director Jonathan Sayer that was founded in 2008 by a group of graduates of The London Academy of Music and Dramatic Art (LAMDA) and began as an improvised comedy group. Mischief Theatre performs across the UK and internationally with improvised and original scripted work.

Tickets for “The Play That Goes Wrong” are available by calling (213) 972-4400, online at www.CenterTheatreGroup.org, or by visiting the Center Theatre Group Box Office located at the Ahmanson Theatre, located at The Music Center, 135 N. Grand Avenue in Downtown Los Angeles, 90012. 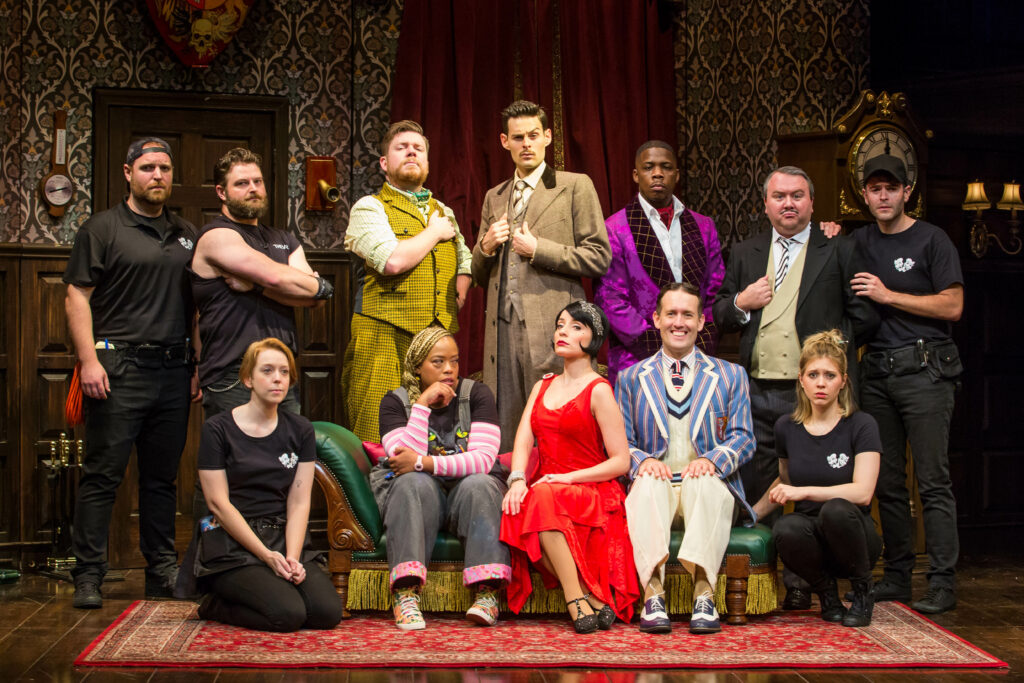 The company of the national tour of The Play That Goes Wrong. Photo by Jeremy Daniel.