“The Hunchback of Notre Dame” Brings 15th-Century Paris to Istanbul 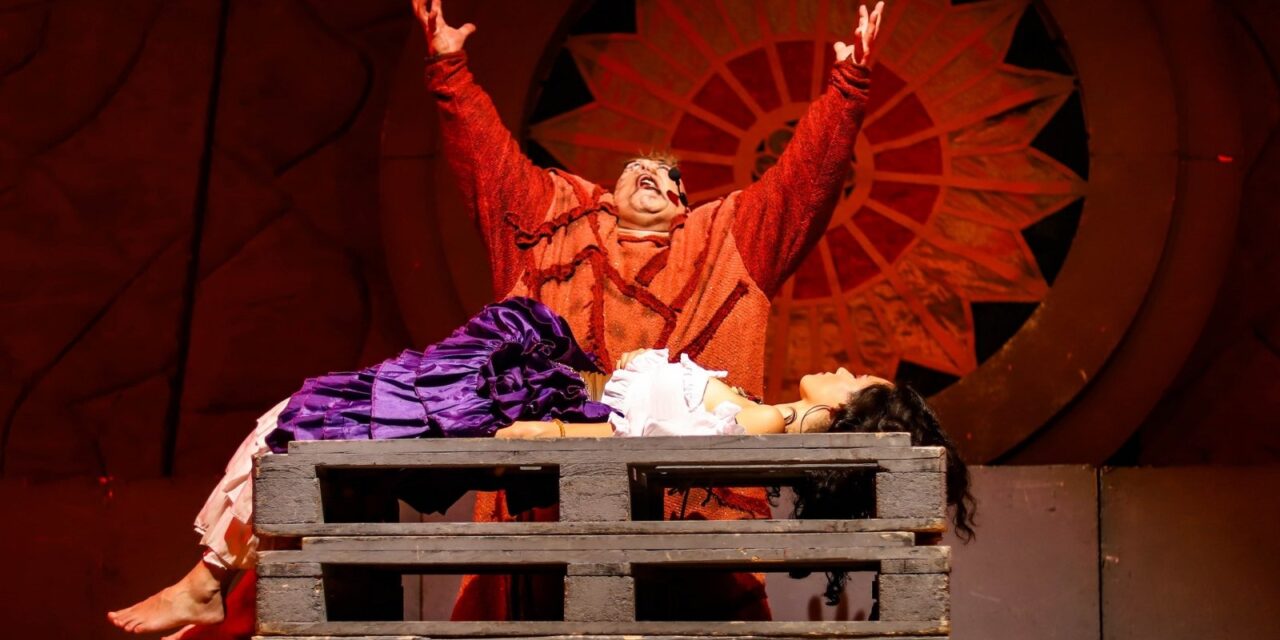 Adapted from Hugo’s popular novel, the musical presents sections from the post-revolutionary dark days of the imperial period in France and depicts the place of fate in people’s lives and their struggle with poverty.

French gothic classic The Hunchback of Notre Dame by Victor Hugo is one of the greatest novels ever written, and most of us have read it at one point in our lives. The novel, published in 1831, is revered as one of the key texts in French literature. On top of that, its success can be understood from its various adaptations, from films to ballets and plays.

An eponymous musical version of Hugo’s immortal literary work has also been performed on prominent stages all across Turkey by Kumbara Visual Arts Theater since 2017. The musical depicts the love felt by Notre Dame Cathedral’s bell-ringer Quasimodo, who was born deeply deformed, for Esmeralda, a beautiful Roma street dancer. I had a chance to see a performance of the musical at the Trump Culture and Performance Center in Istanbul’s Trump Shopping Mall. Luckily, I was in the first row, which enabled me to become immersed in the story easily. When the performance started, I was excited and could hardly wait to be transported to the streets of Paris through the gothic tale. Amid theatrical smoke and fog that captured my attention, I was in a world where the atmosphere of 15th-century Parisian life was introduced with energetic dances and the songs of young artists.

The Hunchback of Notre Dame is actually a story of the Notre Dame Cathedral itself, and Hugo initially focuses on depicting the Gothic architectural elements of the structure in his story. When he wrote the novel between the years 1828 and 1831, Paris was on the verge of major cultural changes. Following the second French Revolution, also known as the July Revolution, people wanted to free themselves from the past, which resulted in the cumulative destruction of cultural heritage. Gothic architecture was a beacon of French cultural heritage, according to Hugo. That’s why he returns to 15th-century Paris, recreating the vibrant ambiance of the period, recalling the glory of the city’s gothic past in The Hunchback of Notre Dame. Taking the French revolutions into consideration, Hugo was more conscious of the major division between social classes. Therefore, he reflected the turmoil and crime that the class distinction created in his works as well.

These significant themes are relayed to the audience from the very first moment with entertaining songs accompanied by intriguing lyrics in the musical staged by Kumbara Visual Arts Theater. Having been introduced to life in Paris, we then see the beautiful Esmeralda, played by Kamala Mustafayeva, who tells her life story with a velvet voice.

After all these performances, we finally meet our main character Quasimodo, played by Vural Bingöl, who also adapted the musical together with Erhan Yaman. At the Feast of Fools, an annual festival parodying cardinal elections, hunchback Quasimodo is elected “Pope of the Fools.” The feast scene was vibrant as the dance troop raised the energy of the melodrama. Subsequently beaten by an angry mob, Quasimodo is captured to be flogged, and the only one who takes pity on him is Esmeralda. When she offers him a drink of water, poor Quasimodo falls in love with her. Esmeralda also helps struggling poet Pierre Gringoire, played by Andrea Bahar. When he mistakenly finds his way into the domain of the beggars, they tell him that he must either be either killed by hanging or marry a Roma in order to preserve their secrecy. Esmeralda marries him in order to save his life. Who wouldn’t fall in love with this girl who has such a big heart? Touched by her kindness, Gringoire also falls in love with her. Discovering she is already in love with someone else, he lets his love for her go.

The one who conquers the heart of Esmeralda is Phoebus de Cheteaupers, the captain of the king’s archers. Although he is already betrothed to a beautiful, upper-class lady, Phoebus, played by Hayri Diken, cannot help but be mesmerized by Esmeralda, leading him into a great dilemma. Another character facing a dilemma is the main antagonist Claude Frollo, the Archdeacon of Notre Dame. After seeing Esmeralda during the Feast of Fools, Frollo, played by Yaman, falls in love with the girl as well and tries to gain her affection. However, his mad attraction to Esmeralda sets off a chain of events that results in the death of Esmeralda. While both Diken and Yaman perfectly reflect their characters’ turmoil, Mustafayeva fascinates audiences with her charms as her character does her admirers. The most significant thing about the musical is that it presents a performance by young talented actors and dancers instead of known artists. This provides young artists with an opportunity to both showcase their talents and increase the energy of the show. For example, Melis Umay Doğu, who is in the acrobatics and dance staff of the musical, participated in the World Capoeira Sports Championship held in Budapest, Hungary in January 2022 via her own means, since capoeira does not have a federation in Turkey. There, she became the world champion and won the gold medal.

At the end of the musical, Phoebus is stabbed to death by Frollo, Esmeralda is accused of murder, convicted by the court and sentenced to hang. Although Clopin, king of the beggars, Gringoire and Quasimodo all try different ways to save her from the gallows, the production ends with Quasimodo embracing the dead body of Esmeralda.

The Turkish adaption of The Hunchback of Notre Dame flawlessly depicts a tragic drama blended with Hugo’s detailed depictions of 15th-century Paris. Dynamic performances by young artists and dancers, dressed in period clothing, add another dimension to the production.

This article was originally published by Daily Sabah on February 20th, 2022, and has been reposted with permission. To read the original article, click here.