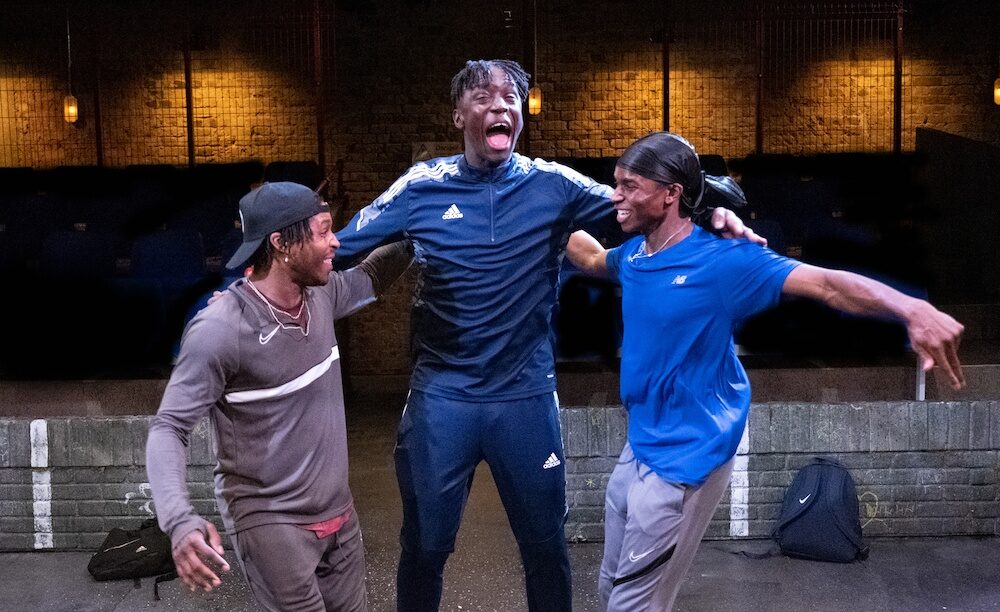 Football stories are never just about a game — they are also about life and how to live it. In Tyrell Williams’s Red Pitch, his debut play now getting an enthusiastically energetic staging at the Bush Theatre after a shorter version wowed audiences at the Lyric Hammersmith in 2019, three young black teens meet at a five-a-side pitch in South London. They have different characters, but are united in a singular vision of what success means: being a star footballer and buying the best car in the neighbourhood. But, just as they are beginning on the journey to realise their dreams, that locality is rapidly changing.

Set in the caged pitch of the title near the fictional Reedbury estate, this is a coming of age story about male friendship. Bilal, Joey and Omz are 16-year-olds who have grown up together on a council estate: Bilal is the most focused, but has stern father issues; Omz is angrier, more of a rebel and more willing to face up to their coach; Joey acts cool, but is as ambitious as the others. But their friendship comes under strain when they go for a trial set up by Queens Park Rangers football club. While the Premiere League is the goal for any aspiring footballer, which of them will be successful?

Williams rapidly sketches out the characters of his three young players, gradually adding some background shading. Despite his youth, Omz is also looking after a Rahim, a younger brother, and his increasingly frail grandfather. While Bilal and Omz are Muslim, and Joey is Christian, all of them believe that God is on their side. What is beautifully and vigorously represented is the teen masculinity of the boys, their pride and their sense of honour. So while they are playfully rivalrous, there is always the potential for a violent escalation of disagreement. These kids have known each other all their lives, which gives their relationships a really deep undertow.

It’s also interesting that the issues of racism and crime, so often the main themes of plays about black youth, are absent. These boys have very limited interaction with white people, who barely register on their everyday mental horizon. This feeling of a teenage segregated friendship group also adds pressure to their aspirations and conflicts. Being hermetically sealed off from the outside world, in fluid state between childhood and adulthood, means that they are inside a pressure cooker of emotions: bravado mainly, but also moments of vulnerability. And boy, just watch those hormones fly.

For all three, their teen world is an endless round of rigorous training, sweet dreams of sporting and sexual success, and gossip about their peers, especially the feckless Femi, who prefers girls to football. Although Bilal, Joey and Omz go to a wild party a couple of days before their trials, they don’t drink alcohol and their main aim is to get some good selfies to post on Instagram. Williams creates a loving mix of innocence and experience in the psychological make-up of the boys (Joey and Bilal, for example, have a Plan B if football doesn’t work out), and shows us how the man of the future is already visible in the teen of the present.

As well as football training, the world of the play is hemmed in by gentrification. The familiar urban landscape is rapidly changing, a process symbolized, in a humorously acute passage, by the closing down of Morley’s chicken-and-chip shop on the Woolwich Road. The place is now a Costa coffee bar. Chicken wings have been replaced by lattes and soup. The boys don’t like it. Change also means that the flats in which their families live are scheduled for demolition, and while this offers an opportunity for a better life, it also creates problems. Politically, the point made is that investment in the area to improve it would have been better than completely changing its familiar urban character.

Although this is his stage debut, Williams is already an experienced writer, having graduated from BAFTA Elevate as well as co-creating, co-writing and directing the viral web series #HoodDocumentary, which boasts more than four million views on YouTube. So if some moments are a touch clunky and his storytelling is quite simple and straightforward, although given one surprising twist, his use of language is wonderfully rich in its expressions of slang and vivid teasing chat. When these boys speak the air zings. Casual mentions of soccer icons Jadon Sancho and Kylian Mbappe add density, but it’s male competition and friendship that is the central theme: these boys need each other. In the end, that’s all they’ve got.

Daniel Bailey directs Francis Lovehall (Omz), Emeka Sesay (Joey), and Kedar Williams-Stirling (Bilal), familiar from Steve McQueen’s Small Axe and Netflix’s Sex Education series, in a glorious 90 minutes of high energy performance. In this buzzing show, apart from a few moments of deep reflection, no one stands still. The actors embody their characters with utter conviction, amid constant nimble football moves and a joyous dance sequence. Helped by movement director Dickson Mbi and designer Amelia Jane Hankin, they are pitch perfect. To the background sound of construction work, and the foregrounding of dance music, this excellent piece of new writing is effortlessly and energetically entertaining.

This article was originally published by Aleks Sierz on February 28, 2022, and has been reposted with permission. To read the original article, click here. 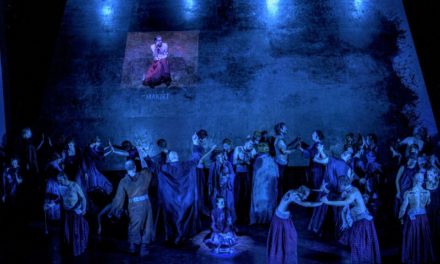 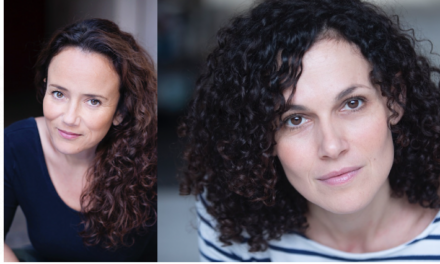