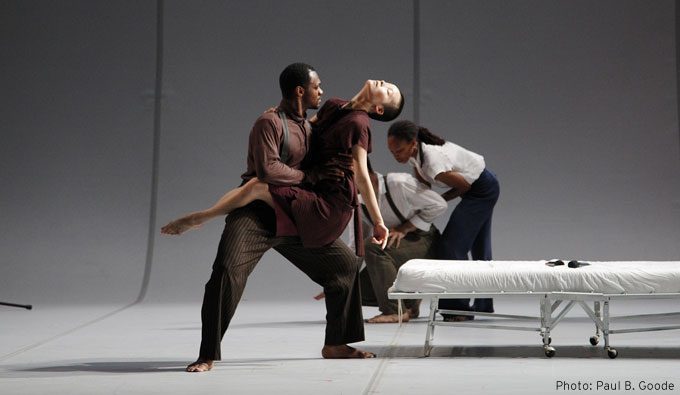 Sixty years after the end of World War II, we approach a new challenge: how can we assure that the stories of those who experienced the Holocaust are never forgotten and never lose their power? In their recent piece, the Bill T. Jones/Arnie Zane Company introduces a new way to convey both the historical and emotional truths of a survivor’s life.

Currently on a national tour, Analogy/Dora: Tramontane is a mixture of modern dance; verbatim oral history performance; artistic set play; and both live and recorded music. It is built around an interview with Dora Amelan, a French Jewish woman who worked for an underground organization that aided victims in Vichy French internment camps during the Holocaust. Dora tells the story of the beginning of the war, her mother’s death, her move from Belgium to France with her sisters, her resistance work, and the death of her sister. The piece is the first of a projected trilogy, the next instalment of which, Analogy/Lance: Pretty aka The Escape Artist, will have its New York premiere on May 13, 2017, at Purchase College.

The Dora dancers can make the most complex manoeuvres look easy, even as they are frequently asked to multi-task: one dancer must lift her troupe-mate over her back as she continues to speak into a microphone conducting an interview. Her voice never wobbles. But the performance ranges in style and mood, mirroring the language that flows through the speakers. At times the dancers violently emphasise the difficulty of the choreography. One repeated and particularly effective example of this approach involves the troupe tensing their muscles so powerfully that they begin to shake, vibrating and convulsing as if they are shivering to death. The crescendo as the shaking spreads throughout the troupe and makes the bodies spasm vigorously, creates an emotional response in the audience that couldn’t be achieved by using words alone to tell Dora’s story. The desperation is conveyed so viscerally that we feel it in our own bodies, imagining the abused and malnourished bodies of the camp prisoners revolting against themselves.

The dancers fluidly rotate and carry a set of extra-large white and red reversible Tetris-like set pieces, arranging them in different configurations to frame other performers and to create new spaces. On one occasion they are arranged to make a three-walled bedroom with a small window through which one dancer could interact with another. On other they are transformed into barracks; the stark white sheets of hard material hinting at the harshness of the life Dora is describing. On another, a set of thin wooden poles are used to represent a boxcar in which Jews are carried to an extermination camp. Individually, these architectural props held no character, but incorporated into the choreography, these physical, yet illusory elements of the set pieces served to ground the audience in a series of emotional realities. The spaces the troupe create are not real; we do not have to see the floors of the barracks, or the walls of the boxcar. Instead, we feel the oppressive and inhospitable atmosphere of the barracks and the claustrophobic terror of the car, even while remaining at a physically remove.

The music floating in and out of the scenes is performed live from backstage, adding to the emotional effect, and helping to transport the audience.

Jones mixes factual information to give us context and emotionally charged elements such as the set, the music, and, of course, the dancers. He conveys the experience on multiple levels, makes the pain accessible, and gives us an outlet through which we can acknowledge what has happened without overwhelming our capacity to feel. Dora’s biography is nonlinear, circling back to key events and skipping forward, her voice bouncing between dancers from scene to scene; this focus on the emotional elements of her story, instead of the practical events, made the story more feel more accessible and more organically portrayed.

Often when we talk about the Holocaust, the facts themselves prove too horrific for us to process. We hear the narratives and let the words soak through us without allowing our emotions to drip out; it is sometimes too painful to imagine what it really was like. How can we keep these stories alive and honor the actions and memories of those who experienced and performed bravely during this horrific time? Jones’ answer is to access these stories through movement. The ephemerality of performance, the physical experience of watching dance, the creation of spaces through set play, and the emotional power of music all come together to tell a beautifully harrowing story, triggering tears and laughter, and painting a portrait of strength and kindness in a time of darkness. 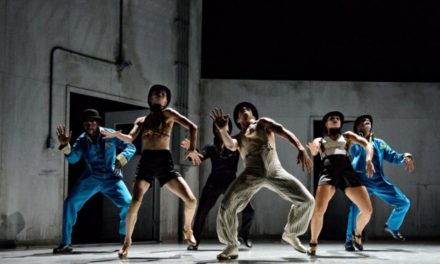 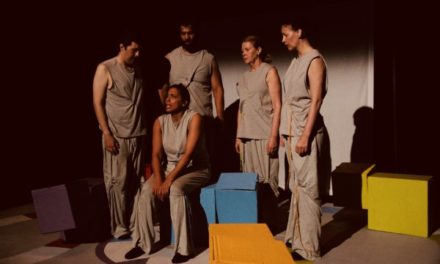