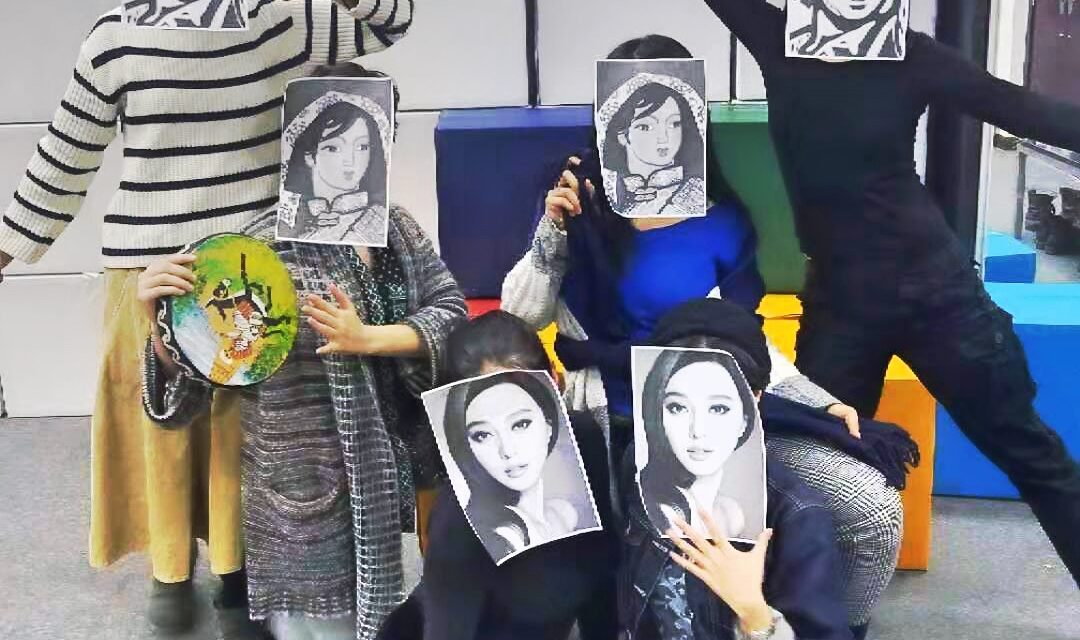 Collaborators of "The Greatest Event in a Doll’s Life." Photo courtesy of the ensemble.

Even in 2019, surrounded by futuristic skyscrapers, accompanied by mobile apps and English translations, the norms of match-making are as old-fashioned and conservative as 100 years ago, including the emphasis on a man’s financial status, the strong preference for local Shanghainese, horoscope compatibility. This harmony-in-contradiction is most visible at the Marriage Market at Shanghai People’s Square, a famous meeting point for desperate parents to exchange profiles of their unmarried children.

In 1919, Chinese literary master Hu Shi’s was inspired by Henrik Ibsen’s A Doll’s House and wrote The Greatest Event in Life, in which the female protagonist Tian Yamei rebels against her parents and walks away from her parent’s home, in pursuit of freedom and a marriage she chose by herself. This play manifested Hu’s concept of Ibensenism, which caused a revolution in Chinese culture and marked the beginning of the feminist discourse and the formation of modern Chinese spoken drama.

An all-female group of Shanghai-based theatre practitioners with various backgrounds in politics, sociology, psychology, banking, theatre, and intercultural communication was awarded an Ibsen Scholarship for the project The Greatest Event in A Doll’s Life, which draws inspiration from both Hu Shi and Ibsen. This project has been selected as the winner of this year’s Ibsen Awards Festival Scholarship and will premiere later this year in Shanghai.  In China, women who haven’t married by the age of 25 are referred to as sheng nu. The term literally translates as “leftover women” – and such women are constantly trying to reconcile their personal desires with family and societal expectations. This ensemble group mockingly proclaim itself “The Home of Sheng Nu,” responding to the collective aspirations and anxieties of the community. During the group’s rehearsal, I invited them to speak about the spirit of sheng nu, as well as how they integrate field research, gender studies, and improvisation workshops into their creative process. 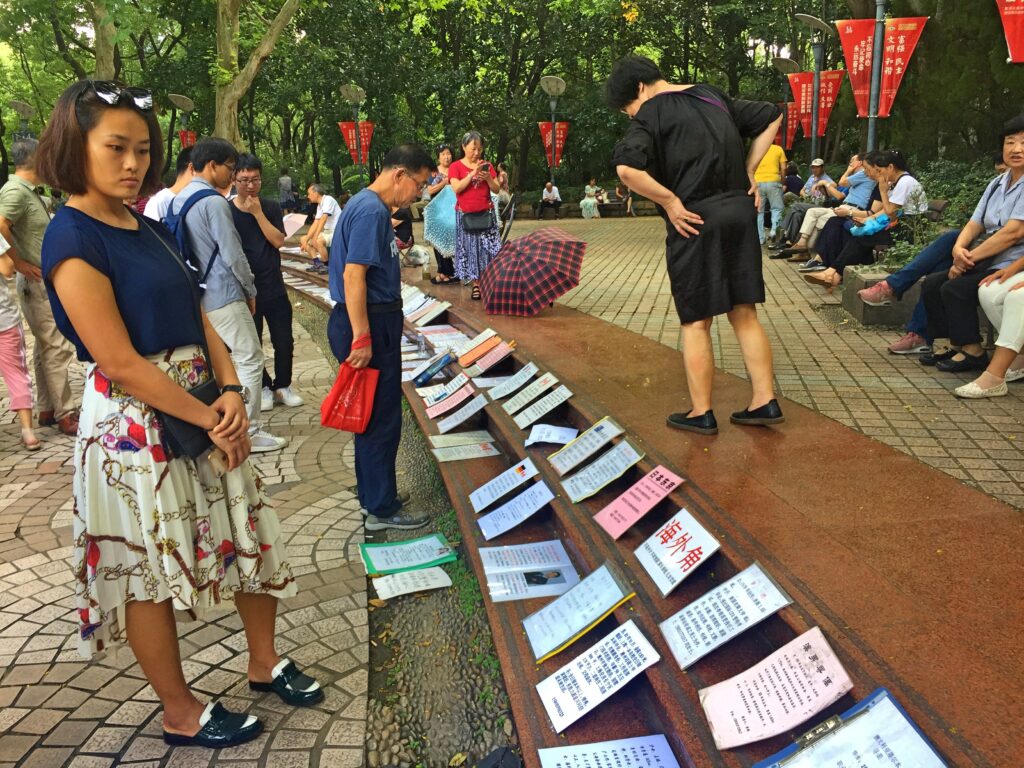 The Marriage Market in Shanghai. Photo Courtesy of the ensemble.

Shiya: How did the five of you come together to create this project?

Yangyang: I was an MFA student at the Shanghai Theatre Academy and, for my final project, I staged a realistic one-act play set in modern times; a direct adaptation of The Greatest Event in Life and A Doll’s House. We had an inspiring post-show talk with the audience discussing issues on marriage which made me want to continue developing the project.  Lelia was in the same course as me and was the first collaborator to join in.

Lelia: I approached Fabrizio Massini, who at the time was the artistic director of Ibsen International. Through his connection and a seed-funding from Ibsen International, we put together the entire team and started the project. We started a series of open-ended workshops to delve into the themes of the two chosen texts. From that starting point, we found our central focus: “What is marriage’s role in today’s world? How can we renovate the institution of marriage so that it fits our personal vision?”

Selena: It doesn’t mean that we all want to get married. We want to use marriage as a reflection of our anxieties and conflicts today. We realize that marriage is like a mirror that reflects the totality of all our anxieties. Often it is the conflicts between the institution’s expectations and our self-actualization.

Lelia: Anxiety is a key emotional touchstone of our project, from which we draw our key inquiries.

Cuixi: Indeed, it also reflects our country’s anxiety about the aging population which is passed on to our generation.

Shiya: Each of you has a distinct marital status. What does “marriage”  mean to you personally?

Cuixi: A family legacy. An obligation and a duty that a good daughter needs to fulfill.

Lelia: It’s a ritualization of a life-long commitment to building a family with someone. It came up many times in our workshops that marriage might simply be a legal identity, even though that might not be on a personal level.

Yangyang: It’s a commitment between two people who mutually want to be each other’s life partner.

Yisha: I’ve been married for one year. I start to rethink about its meaning. I feel content and I don’t need a certificate to be socially accepted.

Selena: It’s a lifestyle choice made at a particular moment.

Shiya: Indeed, marriage carries very diverse meanings for each individual. Are you seeking common ground in your project?

Yangyang: We are not trying to create a guidebook for the 21st-century marriage. Art should raise questions rather than providing one cohesive opinion otherwise it becomes propaganda. Through the process, we have been very open and supportive of each other, which makes it possible for us to share our family backgrounds and upbrings. By presenting all these differences and alternative ideas, we hope to inspire the audience to find a personal understanding that works for themselves.

All (laugh): Our first reaction to this jury award conclusion was: Oh my god, that is so much pressure! We discussed what “feminist manifesto” means and found it a bit old-fashioned and also not specific enough. We want to go beyond a bold tagline and explore how social structures and frameworks become constraints to individuals.

Lelia: We want to explore how feminism confines and conflicts in our daily life and the things that we do which cannot be categorized as feminist actions. Simply walking out from the old system is not enough for us because we want to reconcile with the system on an individual level.

Yangyang: The Greatest Event in Life is a representation of ideologies in the May Fourth Movement and running away from a traditional family for love does seem like a romantic idea for the writer at the time. However, we have moved on from ideologies and we want to investigate what does independence means for our generation.

Selena: We are inviting other women to join the conversations and revisit the legacies from the older generations.

Shiya: “Shanghai is a place of contradictions: a global megacity defined as much by capitalism as by communist ideals. An outward-looking attitude embracing foreign values and strong pride in its own identity fuse together, creating a unique cultural legacy known as Haipai.” Your project proposal mentions that Shanghai is a source of inspiration. Can you explain how Shanghai influences your project?

Lelia: Many aspects of living in Shanghai intrigues us: the city’s capitalist reality, the multi-generational ways of engaging with the institution as well as it’s multicultural and multilingual context.

Shiya: Can you explain how the collective creation approach is practiced in your research and creative process?

Selena: Four of us will be on stage as characters to share our investigations and stories as well as our interview research. Each of us has a key inquiry of the topic and leads related researches and workshops, and then we deal with the collected materials together.

Cuixi: We come from very diverse artistic backgrounds. Lelia, Yisha, Yangyang come from more traditional text-based practices, Selena focuses more on documentary approaches and I do a lot of physical theatre. We share the same artistic vocabulary, at the same time we offer different angles to workshop our materials. Our research process echoes our interests and perspectives. 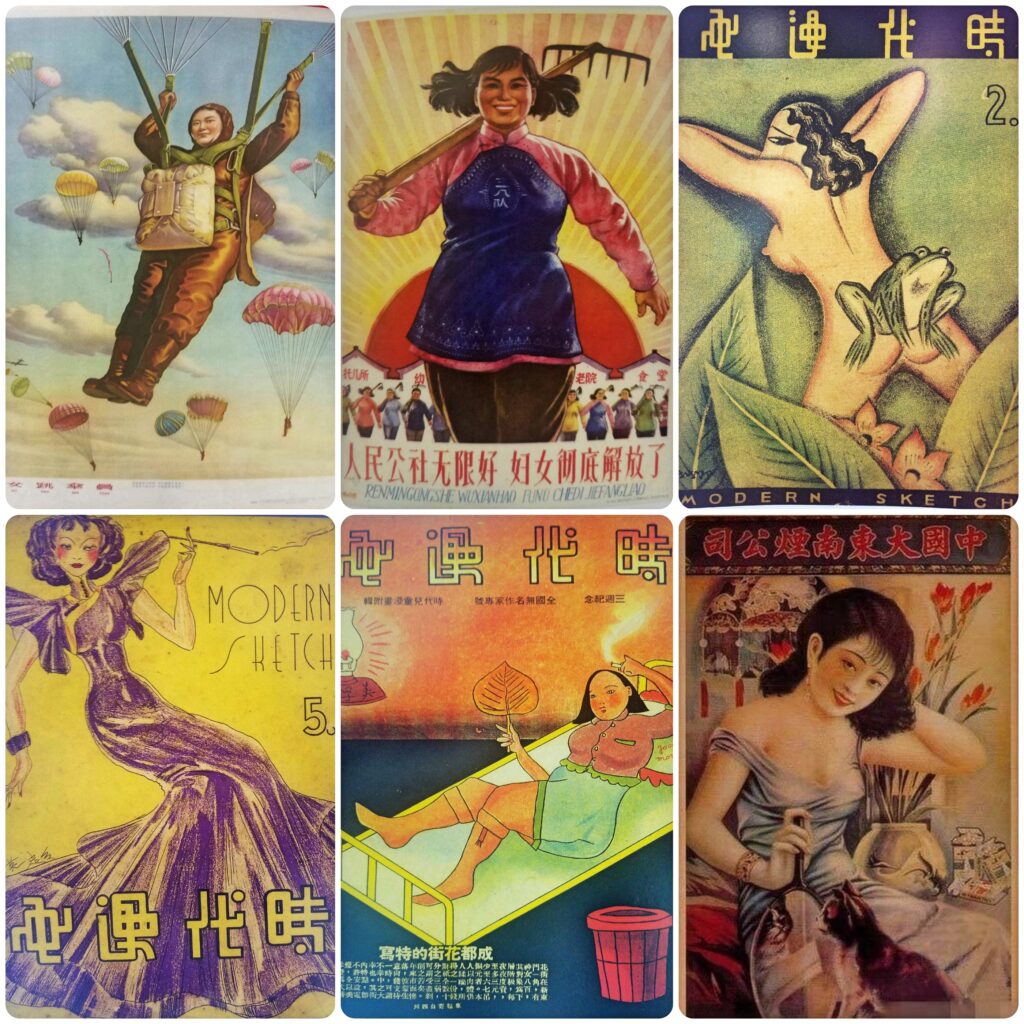 Shiya: What are your discoveries during your field trip at the Shanghai Propaganda Museum and the Marriage Market?

Yisha: Our trip to the Shanghai Propaganda Museum gave us some insights on how women are portrayed in different eras for the government’s purposes or the consumer’s interests. We became curious about how these images impacted women’s perspectives on marriage and sense of self.

Yangyang: I wrote an honest ad for myself and the other collaborator went to the marriage market to “sell” me. To my surprise, even though The Greatest Event in Life was written 100 years ago, many issues such as the emphasis on superstition are still very present today. The evaluation system of compatibility is updated so that factors such as income, education, housing status are all taken into account.

Selena: Through my interviews, I discovered that many women choose singlehood over marriage mainly because of economic reasons. Shanghai is such an expensive city to live and getting married often means sacrificing an individual’s financial freedom.

Shiya: Has your perception of marriage shifted since working on this project?

Yangyang: In one workshop, we did the Hotseat Exercise, where the other collaborators asked me various questions. During this process, I made a breakthrough and realized that I do not need marriage to fulfill my desire of having children. I am not against marriage but the pressure of buying into the social construct is no longer there.

Cuixi: Realisation doesn’t necessarily help because we have internalized so many of norms. As independent and educated young women of the 21st century, we understand marriage is not everything. Yet we ask ourselves again and again: how are we feeling right now?  (laugh) We also question the idea of independence as capitalism enables us to outsource our problems so we have the illusion of being independent.

Selena: I realized that I am defensive when it comes to marriage because it does not sit well with my pursuit of independence.

Lelia: I got divorced before joining this project and this creative process helped me to get more clarity on my deepest longing, which is building a family. 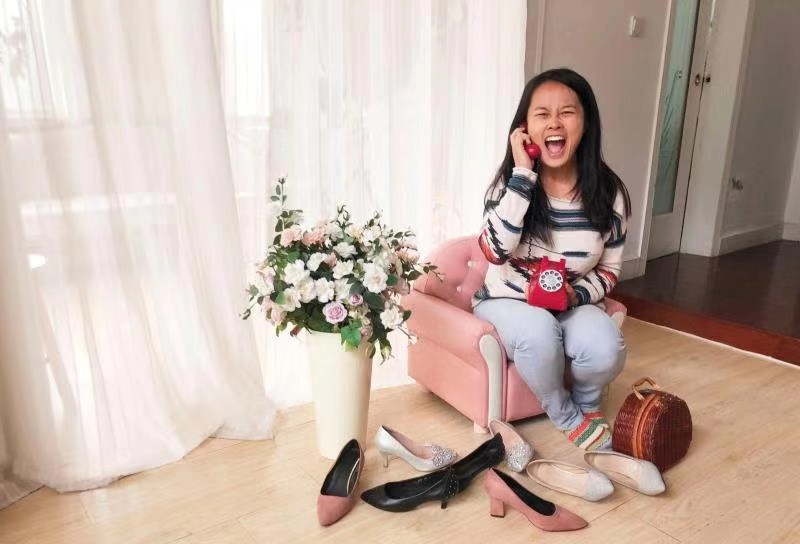 Photo Courtesy of the ensemble.

Selena LU has a BA in Politics, Psychology, and Sociology from Cambridge University and MFA in Theatre Directing from East 15 Acting School. She is the co-founder of _ao_ao_ing ensemble in Shanghai, focused on devising. Trained with psychological and anthropological imaginations, Selena aspires to use the theatre-making process as a means for self-discovery, community building, social documentation, and all possibilities of real-time changes.

Cuixi LIN is a theatre director and performer with a special interest in physical theatre devising. She is a co-founder and member of _ao_ao_ao ensemble. With a focus on topics of gender, identity, technology, and humanity, Cuixi creates performances that speak about present-day dilemmas in the language of fantasy. She is a graduate of Theatre Directing MFA training at East 15 Acting School in London. She has also trained with Odin Teatret, GITIS Moscow and Gecko Physical Theatre Company.

Yisha LU graduated from King’s College London MA in Theatre and Performance Studies in 2018 and the Shanghai Theatre Academy MA in Theatre Directing in 2016. Her directorial works include Twelfth Night (2016) which was invited to perform at the National Centre for the Performing Arts’ “Young Director’s Project” in 2018, and recently several theatre plays for children, including The Solar System (2017), The Amazing Earth (2018), and Children’s Troupe (2019) which is produced by the China Welfare Association Children’s Art Theatre.

Yangyang GUO was born in Beijing and grew up in the US. After graduating from Duke University, she worked in investment banking at Morgan Stanley in NYC but left the finance world to pursue her passion for the performing arts. She has performed in theatres across New York, Beijing, and Shanghai, and is committed to telling stories from unique perspectives and under-represented voices.

Lelia TAHABURT is an Egyptian-American theatre artist based in Shanghai. She recently completed an MA in Intercultural Communication Studies at the Shanghai Theatre Academy with a focus on multilingual theatre in Shanghai. Besides an interest in languages, Lelia is also drawn to site-specific work and music. For two years, Lelia served as artistic director of the intercultural theatre group One World Theatre in Shanghai. She has acted at both large and small theatres in the USA and China, most notably at the National Center for the Performing Arts in Beijing in 2018 as Viola in Twelfth Night.