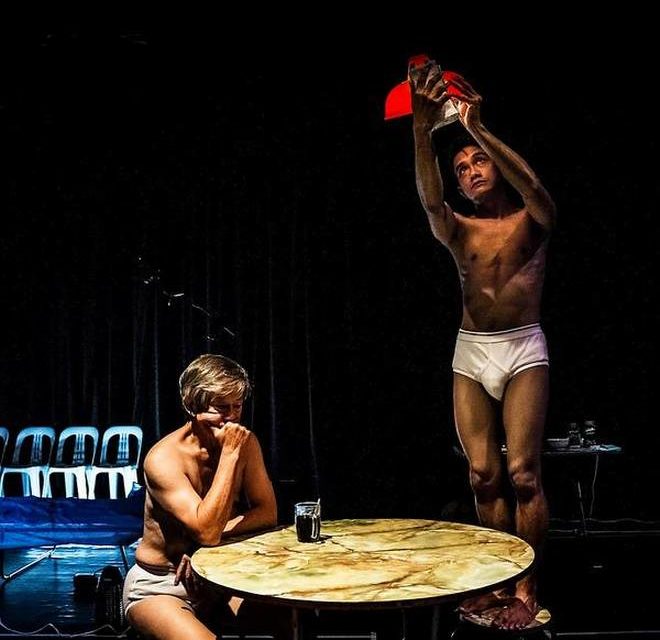 Quotidian interactions: A scene from "The Malay Man and His Chinese Father" , a play from Singapore directed by Noor Effendy Ibrahim.

Even when catapulted into public discourse in inglorious fashion, a la Aziz Ansari, our conversations on sexual consent and coercion, especially in a heterosexual context, remain woefully inadequate. This is not a well-studied area in the very least, despite the fact that our understanding (limited or otherwise) of these concepts can inform our lives in countless ways. In contemporary theatre, survivors of sexual assault have found powerful and compelling voices in a profusion of artistic explorations. Quite fittingly, there are no ambiguities of consent to be considered in narratives that deal with egregious situations such as rape. Yet, the everyday interplay between men and women in conventional dating situations is also fraught with complexities that don’t get scrutinized often enough. Analyzing the impasse between the implicit and the explicit, between the verbal and the non-verbal, can frequently devolve into a sorry ‘he-said-she-said’ state of affairs.

A set of plays that were recently staged at the International Theatre Festival of Kerala have entered the fray of this discussion, by intriguingly using the prism of same-sex interactions to examine consent behaviors, if only peripherally (there being other overriding themes driving the performances). Queer attitudes towards initiating or resisting sex can add a whole new dimension to our perception of sexual consent and the manner in which it may be summoned or bestowed. This is especially true in instances where the power play of gender appears to be wholly absent, even if patriarchal attitudes can never really be escaped from.

In Mandeep Raikhy’s perennially captivating Queen Size, we are allowed access to the private quarters of a pair of male lovers (played by Lalit Khatana and Raikhy himself) engaged in soft-focus coupling under a festoon of wine-glasses suspended in space above a charpoy that creaks and heaves gently with their exertions. It is a purely non-verbal exploration — the voicelessness pointing to the repressive conditions the men live and meet under; or the discreetness of their encounter, even one that is played out in full gaze of an audience stationed only inches away. The sheer neutrality of touch and sensation between male bodies that are so comfortably conjoined stands in contrast to the shameful manner in which sex is usually simulated on the Indian stage. The absence of spoken communication is also reflective of the nonverbal behaviors frequently exhibited by gay men during real-life sexual encounters.

In one sequence, the performers, turn by turn, play out a melange of movements that spell out some resistance to proposed intercourse, which does indeed come to pass despite the initial hostility. Their reluctance could be the result of a ‘lovers’ tiff’ that must necessarily end in a physical reconciliation, in which gestures of intimacy are the means to placate the significant (or otherwise) other. There are certainly all the non-verbal cues here that we have come to respect as indicators of non-consent. However, in this performance, there is no acknowledgment of these undercurrents. There is also the strange absence of any kind of coercion. There is an equality in the dynamic between the lovers, never really shifting from one to the other, which makes this evocation not quite as disconcerting as one might imagine. These behaviors then fall within the ambit of accepted behavior, even if predominantly, Queen Size’s chosen turf is consensual and accessible intimacy, which is refreshing to watch.

Raikhy’s play is an iterative performance, with its segments performed in a constant loop, a feature it shares with The Malay Man and His Chinese Father, a play from Singapore directed by Noor Effendy Ibrahim. Here, it is the quotidian interactions between a son and his father (played by Yazid Jalil and Michael Tan respectively), who is slowly sinking into senility that takes center stage. The son carries the father, washes him, feeds him — the daily sequences are unremarkable but perpetual. Clad only in their undergarments, their co-dependence comes couched in an incandescent homo-eroticism. One of the rituals involves the son wearing an ornate kebaya that may have belonged to his mother and, each night, his degenerate father ‘takes’ him — sometimes with tenderness, sometimes violently, but never with any kind of express consent. The role-playing ostensibly feeds the delusion that is keeping him alive. In Jalil’s performance, we can sense the emotional toll of this dutiful drill, and while the trauma lingers on, it never appears to really get under his skin. There are no easy answers afforded by the piece, and when the actors feel each others’ bodies, with such serene longing and intimate closeness, it surprisingly doesn’t make for uncomfortable watching, despite the incestuous undertones.

Another curveball of precarious consent can be glimpsed in ‘Jihad Beauty’, a set-piece that is part of Still in Paradise, a performance by Swiss Yan Duyvendak and Omar Ghayatt of Egypt. Duyvendak describes a misadventure during a research trip to Cairo, when he and his partner attempt to keep their gay identities under wraps, but find themselves irrevocably attracted to a beautiful young man in a wedding organized by ‘extremists’ in a remote town. Under the influence of a cloud of hashish and yearning, the trio dance seductively into the night, unmindful of the dangers lurching around them. There is consent, most definitely, since homo-social interactions have some social sanction even in Egypt, but there is also the absence of consent — because the larger implications of revealing their true natures could prove catastrophic to the vulnerable outsiders caught up in the grips of an impossible desire. Ghayatt introduces the piece with a knife-dance which is at once enticing and menacing. It encapsulates the haziness of same-sex desire in spaces where spoken communication is banished. In its stead, is an evocation of a love that is both willing and hesitant. These uncertain relationships can certainly teach us much about the dynamics between bodies, lovers, and strangers.

This post originally appeared on The Hindu on January 31, 2018 and has been reposted with permission. 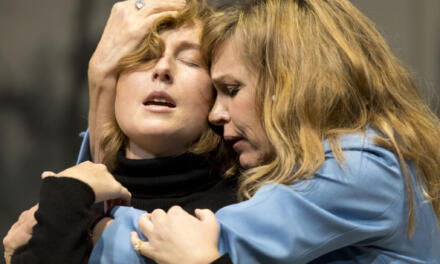