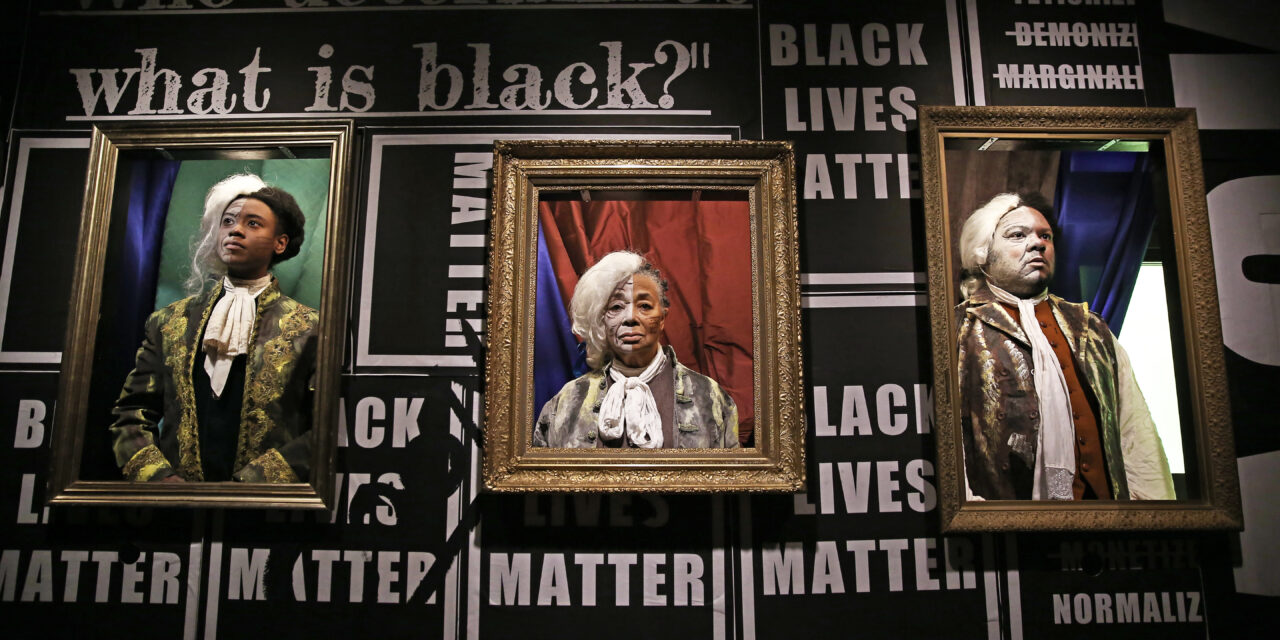 The Black History Museum….According to the United States of America, Smoke & Mirrors Collaborative’s new show at HERE Arts Center, combines, interrogates, reimagines, in short, chops & screws, everything normative American culture would have us keep both fixed and separate. The title tells you a lot about what they’re up to: blackness and American history are the main items under the microscope, but why is this play…a museum? Because experimental theater, museum education and thorny conversations about race in America are among my favorite ways to spend time, I knew I was ready to be an active and eager audience member at this show. Plus, any time a theater sends you a pre-show email encouraging you to wear comfortable shoes (NB: this was the only time this has ever happened), you’re in for something good. And yet, though I thought I was properly primed, this show left me positively shook.

The Black History Museum transforms the two floors of HERE, including the lobby, hallways and staircases, into an interactive and digressive tour of American history. For its curation and originality, D’Vaughn Agu’s set design deserves equal praise from both the theatre and museum communities. (Here’s an embarrassing confession for a theatre critic: I’m still not positive what dramaturgy is, but I am 100% convinced that the dramaturg of this show, Arminda Thomas, is a genius.) After a tone-setting sound installation on the meaning of blackness, the play begins in earnest with the signing of the Declaration of Independence and the founding hypocrisy of this nation, that is, the self-evident truth that all men are created equal. It ends (doesn’t it just) with the presidency of Donald Trump. On the way, you’re accompanied, shepherded, by Robert King as The Guide. Flipping the Hollywood trope that ranges from Hattie McDaniel in Gone with the Wind to Jennifer Hudson in the Sex and the City movie, he calls himself a “magical mulatto,” and explains the rules: no matter who you were when you entered the theater, for the two hour duration of this show you’re Black. 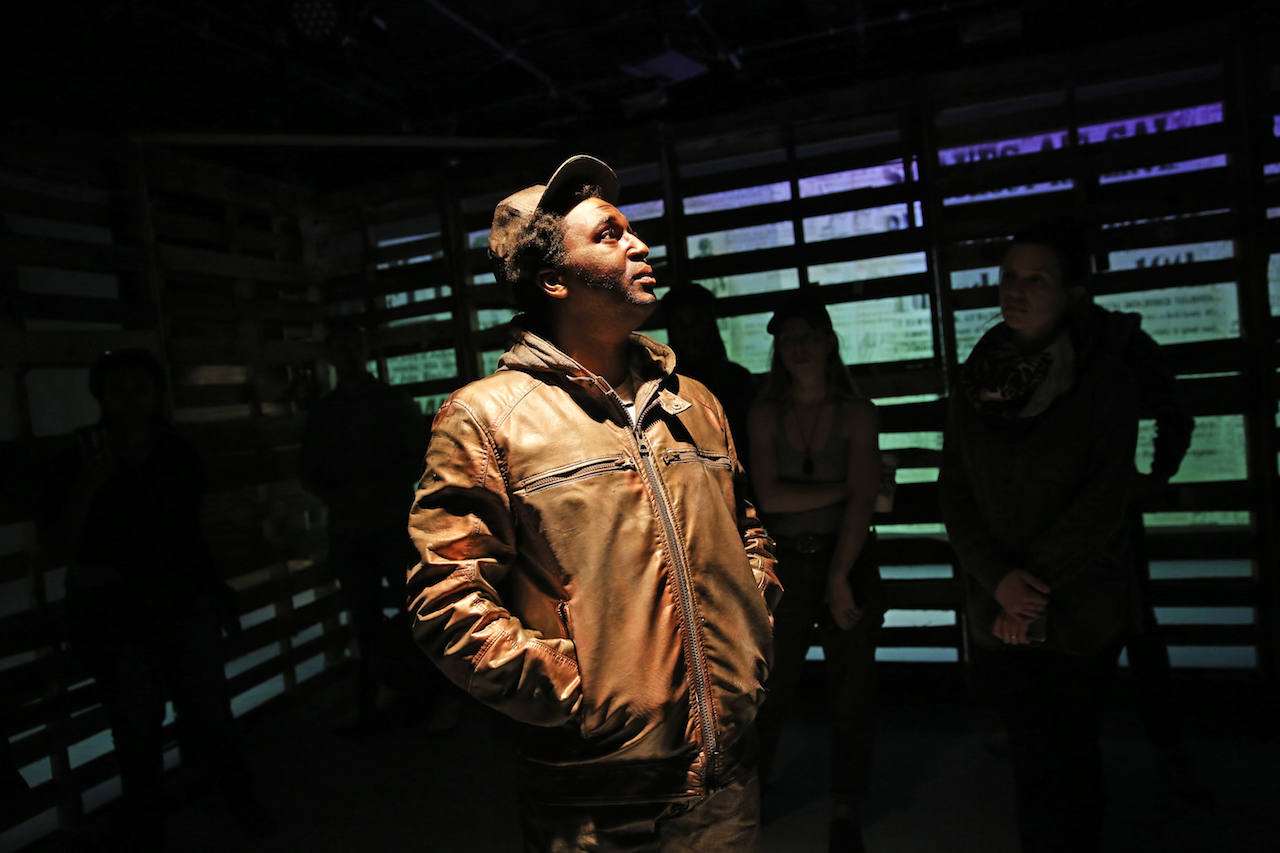 Now, I’m a white person, and I can only write from my own perspective. I wouldn’t presume to say that during the performance, I came any closer to understanding what it means to be Black in America. But I can, say with no exaggeration, that during those two hours I came to a better understanding of American history than I had in twelve years of public school education. I’ve read books and seen movies about the Middle Passage, but I never really felt its brutality, until the cast of The Black History Museum locked me, along with the rest of the audience, in a large wooden cage as dancers Taylor Boyland, Telly Fowler, Eury German, and Latra Wilson move undulatingly around us, their faces expressing terror and rage, their hands reaching through the bars, grabbing us. 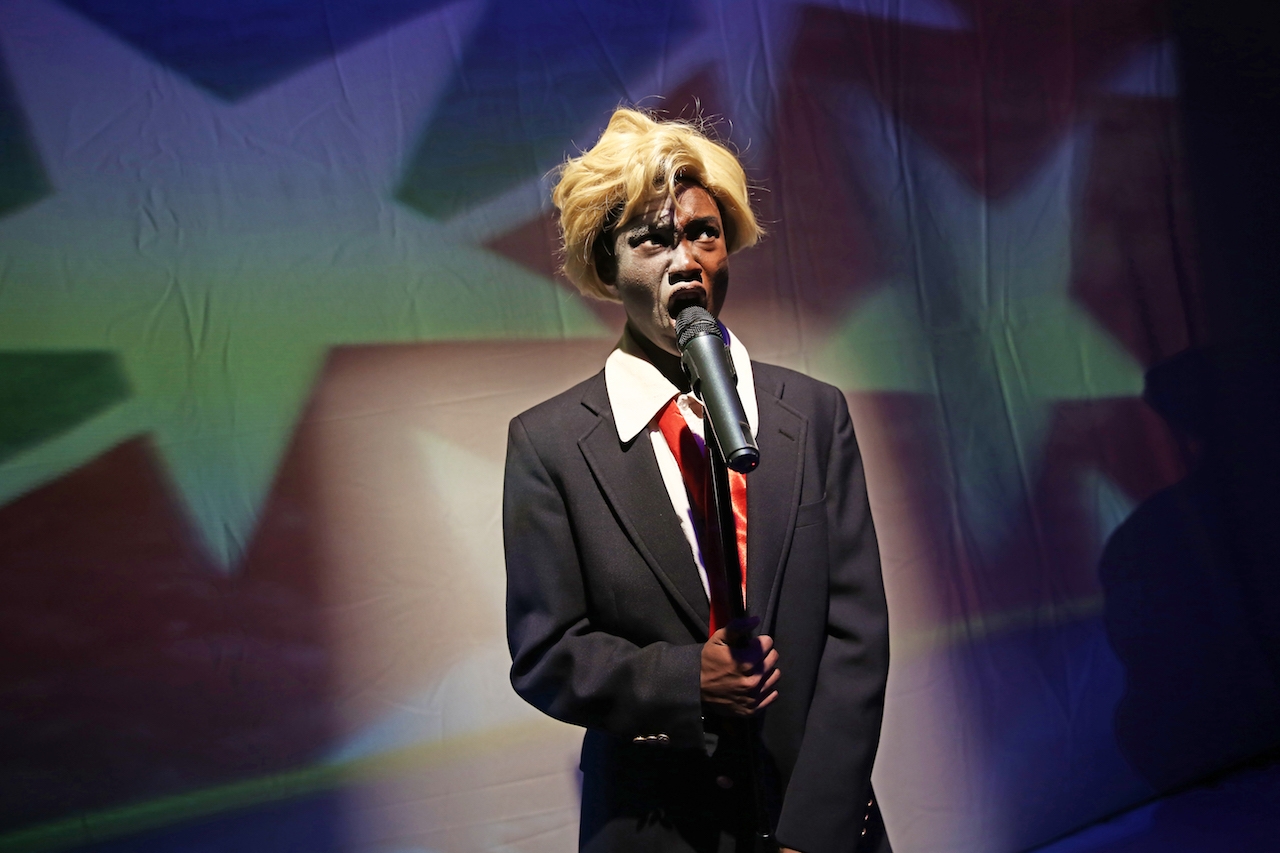 The experience of this show is emotional, intellectual, and physical. You will be exhausted by the end, and maybe have a cry-headache. But what’s amazing is, I laughed as hard as I cried. The playwrights, a group composed of King as well as Kareem M. Lucas, Jonathan Braylock and Zoey Martinson, who also directed the show to staggering effect, do not shy away from humor, even in the bleakest moments. I hesitate to ruin any of the surprises of this show, of which there are delightful myriad, but I will say that in this company’s opinion, comedy is compatible with tragedy. Every member of the ensemble cast, which includes Marcia Berry, Langston Darby, Toni Ann DeNoble, Tabatha Gayle, and Landon Woodson, is multitalented and performs their multiple roles with a seemingly impossible combination of gravitas and levity.

No two people will watch The Black History Museum in exactly the same way. Your experience of the show will depend on your background, your perspective, and (why dance around it) your race, as well as the choices you make while moving through the exhibits and the choices made for you. It’s a live-action choose-your-own-adventure. For me, the most memorable part of the performance was a moment I didn’t share with anyone else, or see anyone else replicating. One exhibit is a hall of historic personal framed letters written, I think, during and after slavery to separated family members. I was reading one, written from a brother to a sister when I felt a hand tap my shoulder. I turned around to see Lucas, one of the playwrights who also appears in the show as The Descendant, a sort of narrator in verse. He told me he had seen me reading the letters, and asked whether I wanted to hear another one that didn’t make it on to the wall. It was from a husband to his wife who was many states away, yet the distance had not dissolved his love for her or, despite mounting pressures for him to remarry, his bond to her. Lucas offered me a heart-shaped pillow to clutch while he read to me, tears streaming down my face, and hug after the reading was over. I accepted both gratefully. 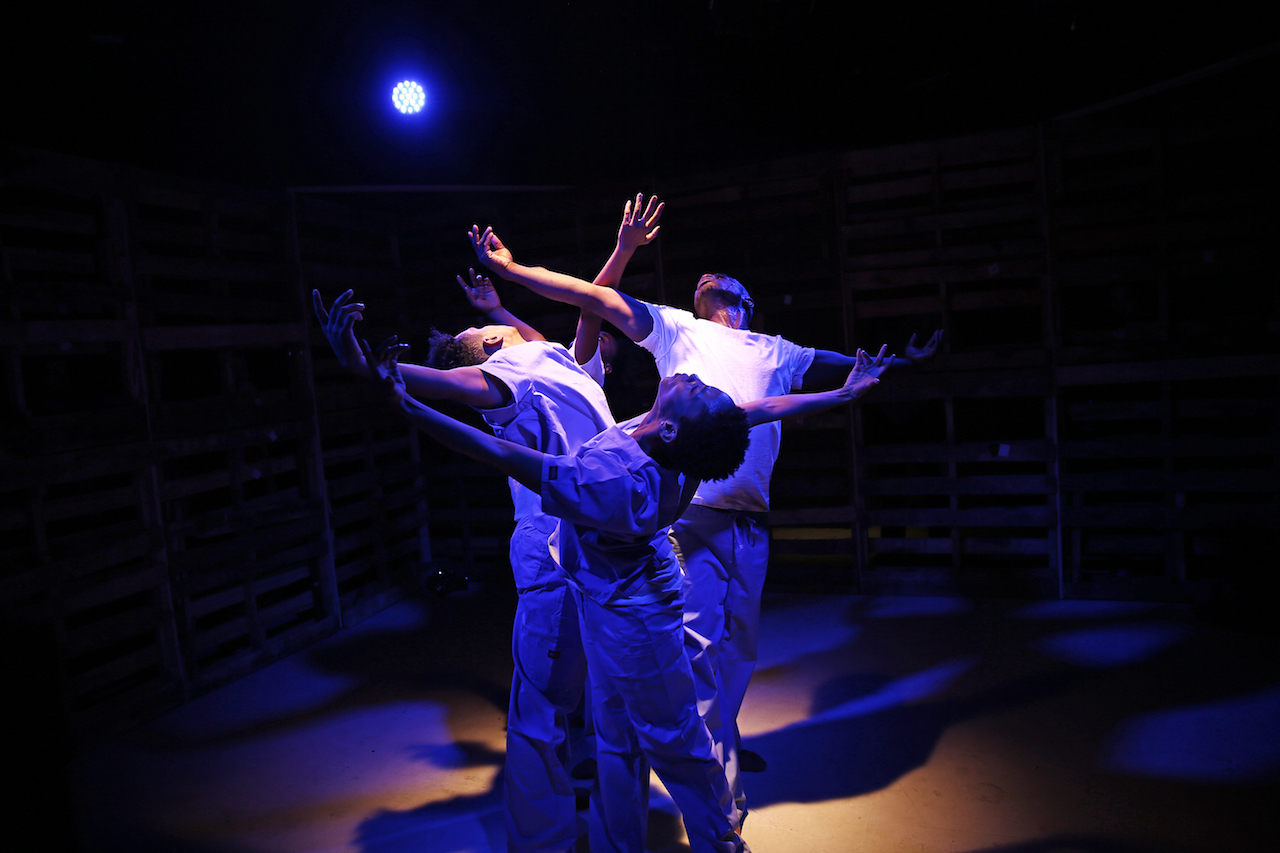 That letter, like many other narratives in the play, ends with a hopeful sentiment of anticipated reunion, “if not in this world, then in the next.” It reminded me of another narrative of slavery, one that is not, in fact, based in history but is nevertheless a cultural cornerstone. When we tell of the Jews’ exodus from Egypt, we say, “Next year in Jerusalem.” Jerusalem here does not necessarily have geographic specificity, to say nothing of its current existence as a political entity. Jerusalem means freedom. We say “next year” every year, because it’s important to hold these truths to be self-evident: it’s better than it’s ever been, and it’s nowhere near good enough.

You can judge the success of a show in a lot of ways: how close it seems to align with the creators’ vision, the mood of the audience after the performance ends, how it makes you feel as an individual. The Black History Museum….According to the United States of America is one of the most successful works of experimental theatre I’ve ever seen. There were things Smoke & Mirrors Collaborative achieved that I’ve seen other theatre artists try and fail to do, like asking the audience to shout out a word or phrase that encapsulated what they would carry away from the show. Often, although some well-natured audience members will inevitably oblige, this feels self-indulgent. The night I was there, though, the words flowed easily, and we could have kept going. So could I, keep going about this show. I could write a whole catalog for this museum. But better you see it for yourself and let’s all of us contribute to The Black History Museum…According to Americans. 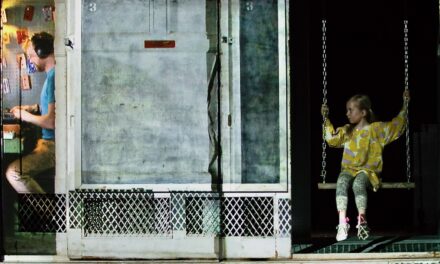