3 Winters at the Royal National Theatre tells the 60-year story of a Croatian family living in Zagreb. Written by Croatian Tena Štivičić, it’s her first play shown at the National, her previous works had brought her recognition across Europe and numerous awards. In 2006 Štivičić was included into the Royal Court’s list of 50 most promising young writers in Great Britain. The London stage, however, is an interesting setting to speculate about the communist past of Croatia and its identity under EU membership.

The play starts in the office of a Housing and Communal Service worker days after the end of World War II. The central character, Rose Kos, receives a flat in a partitioned house as a gift from the Communist Party, enabling her family to survive. The Russian writer Bulgakov said that housing issues almost invariably had a corrupting effect on Soviet people, but Štivičić takes the opposite approach. Here the flat acts as a uniting environment, and one of its former owners, previously evicted by the city police, eventually becomes a member of the Kos family unit as well.

With the flat as key setting, the play jumps over decades and introduces new characters from different generations, the action shifting between the post-war years, the 1990s and the present day. Each period is distinctly characterized: the fear of the future in the ruins of post-war Croatia, the military conflicts among different ethnic groups in the nineties, and modern-day challenges of immigration and the market all accompany the personal dramas and heated kitchen debates. Štivičić chooses the turning points in the country’s history but doesn’t focus on any particular moment or the connections between them. Instead, 3 Winters gives us a wider narrative and discusses the place of Croatia in a world of shifting ideologies.

The play, dominated by powerful female performances, is put in historical context by documentary footage flashing up on screen, the scenes of post-war wreckage and rising nationalism after Yugoslavia’s disintegration creating the illusion of a constantly streaming news channel. Yet it’s Croatia’s current position as a Mediterranean holiday fantasy that’s the lurking problem of the final debate. The youngest characters share a longing to save the attractively located house from being turned into a hotel or shopping mall but disagree on the methods chosen to preserve it. The younger sister, staying in Zagreb, is ready to sacrifice her ideals, while the older, living in London, holds strongly to her opinion about the unfairness of ‘corporate ethics’.

Croatia’s integration process, we see, involves numerous compromises, and a healthy cynicism is vital to surviving. Within the microcosm of the Kos’s family apartment and the changes which whirl through it, Štivičić has created a vivid picture of Croatian post-war history, and the choices, dramas and difficulties that even its new-found position as neoliberal democracy and dream holiday-destination hasn’t freed it from.

This article originally appeared in Central and Eastern European London Review on December 19th,2014 and has been reposted with permission.

Solo 70: Dance Is A Mechanism For Letting Go 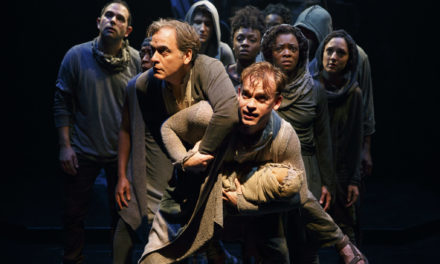