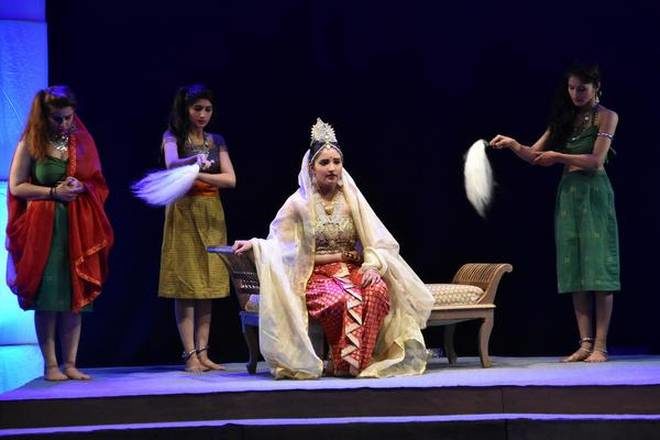 Mohan Rakesh Samman Evam Natya Samaroh annually organized by Sahitya Kala Parishad, Government of NCT of Delhi has acquired a significant place in the history of contemporary Hindi dramaturgy and theatre. Every year an expert committee selects four scripts on the basis of merit submitted by playwrights from different parts of the country. In this process some noteworthy plays have been discovered which are being staged by different directors with varying success, the most noteworthy being Court Martial by Swadesh Deepak. Its premier show presented by SKP under the direction of veteran director Ranjit Kapur catapulted this play to prominence. In Delhi, senior director Arvind Gaur has been frequently presenting repeat shows of this play. Abhinav Rang Mandal, Ujjain has staged so far about 100 shows of the play under Sharad Sharma’s direction. Dr. Shankar Shesh’s Komal Gandhar and Taj Mahal Ka Tender by Ajay Shukla continue to fascinate theatre directors.

This year’s Natya Samaroh, which featured awarded scripts at Shri Ram Centre this past week, illustrates that original playwriting in Hindi tends to be promising with talented young writers being attracted to the writing of dramatic art.

The festival opened with Hastinapur Ki Nirwasit Stree which was written by young poet-turned-playwright Ghanshyam Kumar Devansh, the winner of the top award. The play recreates and reinterprets the mythological narrative of the marriage of Shantanu with Ganga who is bold, independent and a severe critic of decadent royal culture. Shantanu’s close friend advices him to get rid of the obsession of the mystique of Ganga and not to marry her. Shantanu ignores his friend’s advice and marries Ganga. His conjugal bliss does not last long, culminating in heartbreak.

Ganga observes that young and beautiful female attendants engaged to work in the palace are just an object to propitiate the lust of high and mighty royal personages. In case they deliver a baby, it is immediately killed without any moral qualms. The infanticide becomes common to protect the ruling class from being populated by illegitimate children. The royalty wants to maintain the supremacy of blue blood. Ganga’s most trusted and favorite attendant meets the same cruel fate while Ganga is away. The young girl committed suicide to escape from inhuman acts of the rulers. A shocked Ganga is filled with anger and decides to take revenge on the royalty by denying a male heir to the kingdom. Ganga drowns into a river the offspring’s of Shantanu and her and disappears with the eighth male baby, leaving behind a bitterly lamenting Shantanu.

The playwright invests the mythological character of Ganga with a contemporary sensibility. In the mythological narrative, she drowns infants as the consequence of a curse. In the production under review, she does it as a part of her war strategy against the hypocrisy and barbaric culture of royalty. Though shocking, this kind of infanticides are committed by mothers as we see in Euripides’ Medea in which Medea commits infanticide as an act of revenge against her husband who had betrayed her. Here Ganga drowns her seven sons into the river as a protest against the social injustice perpetrated on helpless female royal attendants.

The play opens with sage Vyasa deeply immersed in writing epic Mahabharata. His conscience is tormented to visualize the scene of Ganga drowning her offsprings. Towards the denouement, he is bewildered and terrified to confront Ganga who leaves her only surviving eighth son with sage Vyasa to ensure the infant gets befitting education and training of a Prince before she disappears never to be seen again.

The play is directed by Suresh Sharma, chief of the Repertory Company of National School of Drama, who has also designed the production, using minimal property. The raised platform upstage with levels descending to the center stage ensures uninterrupted flow of action to different locales. Brilliantly designed with imaginative lighting effects and colourful costumes and offstage music, it imparts an aura of royal splendour. Upstage a huge screen is used to project flowing river with ripples. This projection is used in scenes where sage Vyasa is engrossed in his writing work and tormented by infanticides.

The director and performers create a tense atmosphere gradually as the opening light-hearted atmosphere unfolds serious and tragic events.

However, structurally the script needs to bind up a few loose ends at places. The brief visit of Ganga’s adolescent son to the Vyasa, who talks of the ominous and dark shadows lingering in Hastinapur palace, is hardly needed. This idea should have been left to audience imagination.

Elegantly dressed, Ridhima Bagga captures the wounded soul of Ganga and her determination to revolt against the inhuman treatment of a young woman engaged in the royal palace as an attendant. The emotional intensity, the rhythm she creates in her movements and her tense gait leave a deep impact on the audience. Another noteworthy performance is given by Sudhir Rekhari as Shantanu who vividly depicts the portrait of a king obsessed with the mystique of a rebellious beauty and is devastated to see his male babies being thrown into a river by their own mother. Sudhir’s Shantanu, though powerful and learned, finds himself weak to face the furiously combative Ganga, intellectually sharp and endowed with a deep commitment to her humanistic cause.

This post originally appeared on The Hindu on November 3, 2017, and has been reposted with permission.