The stereotype of intergenerational conflict in families from the former Raj comes in two types: one is the traditionalist parents who don’t approve of the modern aspirations of their children; the other is the assimilated parents who are in conflict with their more militant, often fundamentalist, children. Each of these stereotypes are challenged by Sudha Bhuchar in her Evening Conversations, a one-woman show which features the author herself and her family members. It convincingly argues that reality is often much more complicated than our preconceived ideas.

Bhuchar arrives through the audience, climbs on stage and calmly spends a couple of minutes putting on her make-up — her “zoom face” — before settling down to chat with us. An actor and playwright, her career highlights include co-founding Tamasha, the pioneering South Asian theatre company whose hits include East Is East (1996), Balti Kings (1999), A Fine Balance (2005), and The Trouble with Asian Men (2005). Although she has won awards and been praised by, among many others, Asian Culture Vulture online magazine, she still feels angry about the tendency of producers to type cast her, now as “Mum”, but before as an Asian walk-on part.

Evening Conversations has its origins in Bhuchar’s occasionally spiky rapport with her grown-up sons, Samar and Sinan, during lockdown when they were forced to spend a lot of time together. The family has a complex heritage: she’s a Punjabi-Indian born in Tanzania, who was brought to England when she was 11 years old, and their father is from Pakistan. Her father was twice exiled, once to East Africa and then to the UK, and although he spent 20 years teaching Oxbridge-level students in Africa, he couldn’t get a job in England. He died shortly before his 50th birthday. By contrast, Samar and Sinan have assimilated into British culture, speaking in youthful slang and with a healthy scepticism about Mum’s worldview.

After living as a child in Norfolk, Bhuchar’s family moved to London and she is now in Wimbledon, a leafy suburbia characterized by a slightly run-down house and the “quiet desperation” of neighbours, whose recycling bins are full of empty wine bottles. At the age of 60, she is taking stock of her life and career, mixing charming stories with more acidic comments. “I’m not Fleabag,” she says, “with racy stories about three-way sex during my period.” Instead, her show includes a meditation on family inheritance, as when she sees her mother every time she looks in the mirror, and wonders whether she has inherited her frown. And what will she pass onto her sons?

Over about 90 minutes, Bhuchar tells us about her conversations in which Samar and Sinan tease her about her politics — how she bores everybody with her stories about a hard life under Thatcher — and suggest, more than once, that she just needs to chill out. After all, there are “brown people” on Bridgerton so diversity in the arts and media is no longer as big an issue as it once was. Still, she can’t break the habit of pointing out that “there’s no such thing as curry — it’s an English invention, a bastardisation”. So these lockdown evening chats are characterized by reminders that generational tensions are part of every family’s life.

At one point, Samar and Sinan say that “Mum, no one is going to listen to you,” whenever she talks about the radical politics of the past. Out of their exchanges comes a real sense that identity is both mixed and fluid, and that stereotypes have to be ditched in favour of reality. Occasionally, the digressions and asides mean a lack of focus, but Bhuchar is well aware of that, and has even scripted her sons’ advice that she should concentrate on telling a “good story”. Sitting on a chair, reading from a script, with a table and glass of water for props, she tells anecdotes that are both charming and pointed.

Dedicated to the late Philip Osment, who inspired and directed the original iteration of this show, this production is directed by Kristine Landon-Smith, a long-term collaborator who co-founded Tamasha with Bhuchar in 1989. In it, Bhuchar has a marvelous stillness and confidence. She reacts sensitively to her audience in the Soho’s Downstairs cabaret space and ends the evening by adopting a yoga pose on “Bhishma’s arrow bed”, balancing on blocks to reach a sense of inner peace. Watching her connect to her Indian heritage makes us feel like we are her old friends, perhaps more tolerant of her eccentricity and more respectful of her achievements than some of her own family. Yes, she triumphantly if quietly proves that every family has intergenerational tensions, but not every tension is the same. 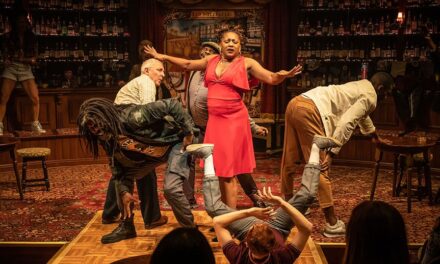 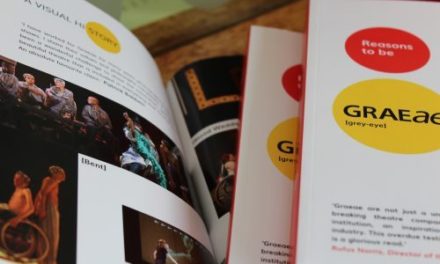