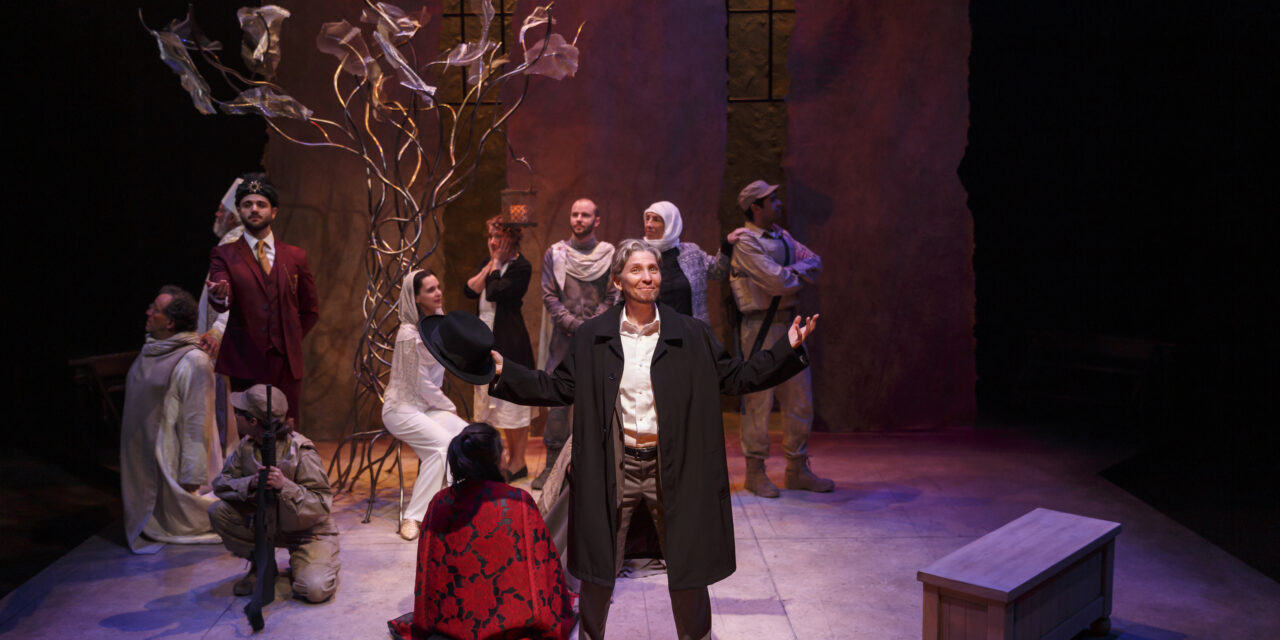 Diane Flacks (centre) as Nathan with members of the company in "Nathan the Wise." Photo credit David Hou.

“ I hear, I hear, come finish with thy tale. Is it soon ended?” – Nathan the Wise

There are moments of heightened intensity in the theatre when time seems to stand still, signaling to us that this is the dramatic kernel that distills the central meaning of the play.

We pay attention to Nora’s frenetic dance of the Tarantella in Ibsen’s A Doll House because we know that her hysterical performance condenses the fullness of her situation. The Mousetrap play-within-a-play in Hamlet stages in nuce the murderous backstory of the action, but it also supplies the hallucinatory image that the failed revenge hero cannot match to action. And when Mitch, in A Streetcar Named Desire, tears away the paper lantern that obscures the sordid reality of Blanche’s life, his action is not only an assault on her flight to illusion but a trenchant commentary on the whole poetic world of Tennessee Williams.

The inset core of Lessing’s Nathan the Wise is the Parable of the Ring and it functions in a similar mode of suspended animation to deliver the central lesson of the play: a plea for religious tolerance in a 12th century Jerusalem, written by the German Enlightenment critic, philosopher and dramatist, Gotthold Ephraim Lessing, for an 18th century audience still unprepared for its radical lesson. It is widely agreed that he wrote the central character as a tribute to his lifelong friend, the Jewish philosopher Moses Mendelssohn. One imagines them playing chess together into eternity, much as they did in their lifetime (and as the Sultan and his sister do in Nathan the Wise).

Never performed in Lessing’s own lifetime, the play became a lightning rod for interpretations of Jewish-German relations with the rise of Nationalism in 1930’s Germany and then, again, with the more tragic hindsight of what had been at stake, in the post-Holocaust era. What can such a parable of religious tolerance mean in our own era of transnational boundaries and the renewed moral demands upon us for the strangers within and without? What can it mean in a 21st century Jerusalem, almost ten centuries later, once more at the crossroads of competing claims?

Nathan delivers his famous plea for mutual respect as a way out of an unexpectedly sticky situation, only one of the ways in which he proves himself worthy of the noble epithet that provides the play’s title.  The action takes place in 1192, during the time of the Third Crusade. With his Dervish finance minister and Nathan’s friend, Al-Hafi (played energetically by Shelly Antony) as a go-between, the Muslim ruler Saladin has summoned the wealthy merchant because his coffers are low as a result of fighting the Christian crusaders.  In order to save face and strengthen his hand in the bargaining, he asks Nathan a riddling question: Which of the three Abrahamic religions, Islam, Judaism or Christianity, is the true one? Wishing neither to betray his own ardent faith nor to put his life in danger, Nathan employs the Oriental ruse of Scheherazade. He tells a story.

Once upon a time, Saladin owned a magical heirloom ring which was to be his legacy to his favorite son. Having indulgently promised the ring to each of his three sons, he solves the problem imperfectly by having two exact replicas of the ring made.  To resolve the inevitable quarrel as to which ring is the true one, his sons search out the opinion of a judge upon his death.   The judge’s Solomonic ruling is to regard all of the rings as the same, their authenticity to be confirmed only by the wearer’s fealty to both God and man. In the same way, Nathan sums up(still walking a delicate tightrope) each man inherits his own faith, but there is no one true religion. It is a judicious plea for tolerance in a land rife with religious tension and, in parable form, it operates as a teaching-piece (lehrstuck) in the manner of Lessing’s most famous dramaturgical heir, Bertolt Brecht.

In this adaptation and translation of the play by Edward Kemp the opening scene stages Jerusalemites of three religions at their morning prayers, alternately bowing and swaying, their voices raised in a cacophony of Arabic, Hebrew, and English. The set (designed with the elegant economy by Theresa Przbylski for the Studio Theatre) is a minimalist but symbolically appropriate affair, with three columns which stand-in for the three Abrahamic religions and a sculptural metal tree which reminds us of their common roots.

Soon enough, this scene of harmony dissolves into an intricate plot of nested Russian dolls in which unity divides into, first, one difference, then another, until they are magically resolved in a story that is part Shakespearean Romance (miracles, mistaken identities, lost and found family members, talismanic portraits), part cautionary tale. Then, as now, prejudices abound, along with stereotypes of the religious other, piled up and accumulated over centuries of mistrust.

When we first meet Nathan, he is hurriedly arriving home from a trading journey abroad, his entry on the stage marked by the projection of his figure as an outsize shadow (a stylized lighting effect from German Expressionist cinema). With word that there has been a terrible fire in his house, his first thought is the safety of his beloved daughter Rachel, played by Oksana Sirju as a strong-minded and contemporary young woman who could be anybody’s 20-something willful daughter.

We learn that she was rescued from the fire by a Christian Knight Templar( Jakob Ehman, who plays the fanatical crusader, with considerable intensity and emotional range, as an erstwhile Nazi prototype) who was, himself, miraculously saved by a pardon from his mortal enemy, the Sultan.  The reason for this double miracle is another stroke of fate, the Templar’s uncanny resemblance to the Sultan’s long-lost brother. Nathan insists that he meet this Christian knight who has rescued his daughter at great peril.  By this time, though, the Templar has learned that the young woman he has saved is a despised Jewess.

The figure who brings the two would-be lovers together, first in gratitude and then, mutual attraction, reinvents the critical role of the Nurse for a latter-day Romeo and Juliet. But, this Christian Darya (in a nuanced and energetic performance by Sarah Orenstein), who is also the bearer of family secrets, will be outfoxed in her efforts by the ever-widening spiral of new revelations. Danny Ghantous, like Saladin, is mild-mannered rather than majestic, often taking a back seat to his stronger sister Sittah (played with appropriate sureness and confidence by Miranda Calderon).

In the title role, Diane Flacks delivers a finely modulated performance that rises to the occasion in the play’s scenes of dramatic intensity. Does the gendered cross-casting succeed in adding layers of new meaning to the play? Arguably, it is of a piece with the play of differences across the text and the central lesson that we are all related in common humanity – as well as not quite what we seem. Yet, her appearance as Nathan is less theatrical-drag or gender-blind casting, than conspicuously “visible” as a slight young woman in an overcoat several times too large, with the gestures of a European ghetto Jew, and a half-hearted attempt at a grizzled beard. Flacks is a talented performer and sometimes brilliant comedian, but she may well be miscast in a role that requires gravitas rather than the quiet charm she exudes in the role.

Director Birgit Schreyer Duarte has mounted an intelligently conceived production that creates momentum in both its dramatic and comedic elements (lay brother Bonafides played by Ron Kenell and Harry Nelken as the scheming spy for the Greek Orthodox Patriarch, among them). This is just the sort of under-performed classic that deserves to be staged more often and the Studio Theatre at the Festival is an ideal venue. Duarte keeps the sometimes tricky action and endlessly changing plot revelations moving fluidly (no small accomplishment) and the result is a strong and coherent production well worth seeing.

Despite its now classic status, Nathan the Wise was never performed while Lessing was alive and it has had a posthumous history which, at times, has challenged its humanist universal premises. In the post-war period, Lessing’s implicit claims (they were also those of his friend Mendelssohn) for an assimilated Jewish identity in Germany could not help but be seen retrospectively as a tragically failed project. By contrast, the play’s setting and the dramatic situation can serve as a dramatic reminder of the rich and fertile cultural cross-pollination of Muslim and Jew in the Medieval period. In fact, it is the Christian characters in the play, both the Greek Orthodox Patriarch and the Knight Templar (in contrast with the enlightened Muslim Saladin and the wise Jew Nathan) who represent the Abrahamic tradition at its most fanatical.

Yet, in this fraught land of successive occupations, it is the armed soldiers who stand silently at the action’s edge (implicit reminders of a contemporary Israeli occupation, their mute presence was mainly puzzling to the audience ) who catapult the play into this new turn of the screw of a layered and ancient history. Nathan, himself, is both inside and outside this history.  In Lessing’s original lengthier version of the play, his arrival from abroad to find his house engulfed in flames and fearing his adopted daughter lost, has a longer traumatic backstory, one that belongs both to his personal history and the much longer tragic history of his people. Only late in the play do we come to learn that his whole family was burned to death in his brother’s house in the Crusaders’ murder of all the Jews of Gath.

At the end of the Stratford production, when all the loose ends of the plot have been tied up and resolved in true Romance fashion, Nathan stands alone on stage. Left out of this magic circle, he remains the eternal Wandering Jew. Here, too, time stands still, and in ways that complicate all of the historical layers brought together in this impossible but necessary play.