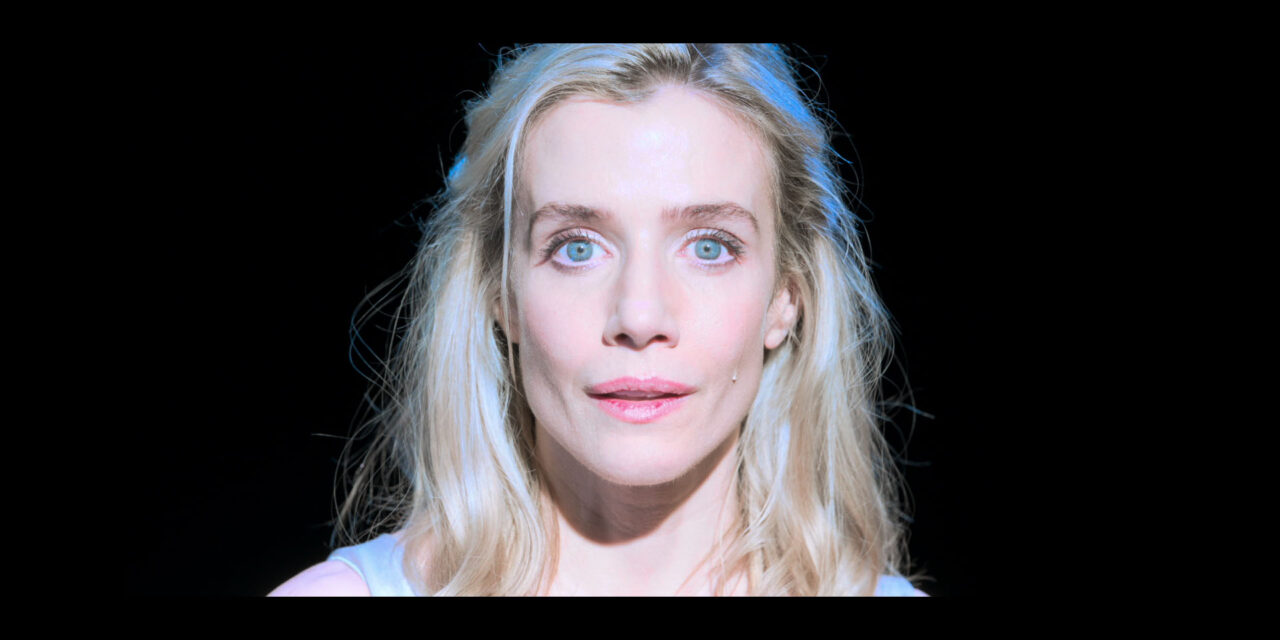 Pale Sister is the latest adaptation of the Sophoclean tragedy, Antigone (c. 441 BC), written by Irish playwright Colm Tóibín especially for award-winning (and fellow countrywoman) performer Lisa Dwan. Pale Sister debuted at Gate Theatre Dublin in a production directed by Carey Perloff in 2019, in the last days of the pre-COVID world. A new production, produced by Angelica Films and directed by Trevor Nunn, is available via BBC iPlayer as part of the channel’s “Light’s Up” digital theatre festival, which aims to promote established and emerging artists and theatre-makers during these challenging times for the industry. Pale Sister is a self-avowed feminist take on the Ancient Greek tale. The production demonstrates the vocal talents of its star, Lisa Dwan. However, Pale Sister also risks appearing an anomaly in the BBC line-up, which is focused on showcasing the racial and ethnic diversity of contemporary British theatre (this line-up being a consequence no doubt of the BEEB’s Creative Diversity Commitment launched in June 2020).[i]

Sophocles’ heroine Antigone is the fearless rebel revered by many modern feminists.[ii] She famously takes the law into her own hands, buries her disgraced brother Polynices against the wishes of her uncle, king Creon, and then commits suicide before she can be punished. Tóibín’s adaptation has retained this feminist angle but has an original take on the tragedy, choosing to focus not on Antigone, but on her sister, Ismene, who is played by Dwan. As the eponymous “pale” imitation of Antigone,[iii] Ismene has typically been depicted as a coward in stage productions as she flipflops between complying with Creon’s orders—too scared is she to go along with her sister’s act of sedition—and allying herself with Antigone. Tóibín’s is by no means the first adaptation of Antigone by an Irish writer; Seamus Heaney, Tom Paulin, Brendan Kennelly, Carl Aidan Matthews, among others, have harnessed the tragedy as analogy for the divisions that have torn apart Ireland as a result of British rule.[iv] But what is unique is this play’s sympathy for Ismene’s plight. As Dwan has pointed out, most versions of Antigone have presented women with a double-bind in the face of men’s laws: you either “fight and die”—in which case you are an “Antigone”—or you “comply and live” like Ismene.[v] Pale Sister features an Ismene who serves an entirely different purpose. Handed down through the ages are men’s stories about “shrill” Antigone, “unsullied by the truth” (00:21:58).[vi] It is Ismene’s role to survive to tell the real story about Antigone’s act of bravery to others. In Pale Sister, Ismene emerges as the bearer of testimony and a symbol of the vital role women can play in the transmission of memory following violent conflict. As she states, “When I fade, so will the truth” (00:09:47). Sandro Botticelli, The Virgin and Child (The Madonna of the Book), 1480. The practice of making white women glow stemmed from Italian Rennaissance art. As Dyer puts it, white women are lit up by something “not of the body, something heavenly” (Dyer 74). This celestiality is marked by the halo, which is established as a continuity of the brightened skin in Botticelli’s painting.

A striking element of Pale Sister is its use of lighting to illuminate Dwan’s body and face. The bright spotlight on the performer is also emphasized by the shadows and darkness which envelop the bare studio surrounding her. As Pale Sister proceeds, lighting purifies Ismene of the stain of guilt that her character bears for initially obeying her uncle Creon. An early scene shows Dwan in a split screen, on the left playing Ismene lit in more sombre tones than Antigone on the right, whose head and shoulders are crowned by a white light. By the end of the play, after her sister’s suicide, Ismene finds herself bathed in the same light as Antigone when she was alive. Indeed, Antigone’s spirit seems to infiltrate Ismene’s body (as Ismene declares, “Her voice becomes my voice […] she is not afraid/I am not afraid”). The production ends with a shot of Dwan as Ismene being aesthetically blanched; her face is captured in a fade-to-white shot (the proverbial “lights up” transition) before the credits roll.

This use of lighting is by no means racially neutral. As Fiona Mountford of inews.co.uk comments, Dwan in Nunn’s production of Pale Sister bears an “ethereal” quality, an adjective combining the quality of being colorless with the idea of being descended from the Heavens (literally of the “ether”).[vii] Film critic Richard Dyer remarked in his book White that film and photography have a history of transforming white female celebrities into “spiritual, indeed ethereal” beings by casting them as “the idealised creature[s] of light”.[viii] Dwan too seems to embody this idealization: the publicity image for Nunn’s production shows her under a strong spotlight, the eponymous pallor of her skin highlighted by the lack of shadow falling on her face, her blue eyes piercingly bright, and her blonde hair glowing like sunlight.[ix] This aesthetic was inherited from Italian Renaissance painters such as Botticelli whose Madonnas were lit up by halos and their pale skin.[x] In numerous Hollywood films, white women were repeatedly purified of their sins by means of the lighting: George Cukor’s, for example, 1936 film Camille exculpates the eponymous character (played by Greta Garbo) of her guilt as a fallen woman and courtesan, via the use of strong tungsten lighting that falls on Garbo’s face and hair suggesting an aura and a halo emanating from her character. Ismene, too, in Pale Sister is absolved from the charge of complicity with her uncle Creon by being lit up with a glow that symbolizes the moral purity of her sister, Antigone. Greta Garbo’s hair and face is aglow in Camille (MGM, George Cukor, 1936). The lighting technique absolves her of her sins as the consumptive courtesan.

This is not about condemning Pale Sister because it is performed by a white actress. It is about acknowledging the fact that a stereotype that is both racialized and gendered—white women as ethereal beings—plays a part in shaping what we take away from the BBC production of Pale Sister. In the transition to digital platforms during this pandemic, theatre productions might be tempted to deploy filmic techniques such as this—close-ups or medium shots of performers under bright spotlights—to conjure up emotion and intensity in ways adapted for screen viewing. Yet, with lighting being included as an element in the demands laid out by “We See You White American Theatre” last year, it is important to avoid cinematic techniques that have served the idealization of white performers.[xi] As a number of commentators in critical whiteness studies have shown, white ideals are the flipside of the coin of harmful and reductive images about people who are perceived as not white.[xii]

But lighting could also serve a more subversive purpose in Pale Sister. Mahsa Foroughi, in a recent The Theatre Times review of Simon Stone’s adaptation of another Greek tragedy, Medea, reflected on how filmic “optical” effects can be put to good use to create a haptic viewing experience in digital theatre.[xiii] In the case of Medea, a starkly lit, shadowless stage reduces spectators’ ability to differentiate actors from the space surrounding them, forcing them instead into forms of sensory engagement with performers on screen that are not based on normative ways of seeing. Though it is does not encompass the stage and performer as in Medea, the lighting in Pale Sister does serve to make starkly visible the bodily fluids that erupt from Dwan as she is performing, and this opens up similar pathways for multisensorial forms of spectatorship. Cinematic close-ups show Dwan’s face covered in sweat and tears, her upper lip gleaming with what looks to be a thin covering of nasal mucus, and saliva spewing forth as she acts out Creon’s ire, Antigone’s determination, and Ismene’s grief. Splutter, spray, and snot connote the mouth and nose from which they emanate, enlivening, potentially, our sense of touch, taste, and smell.

Women’s voice is at the heart of Pale Sister: “she speaks” appears in an introductory caption, referring to Ismene’s voice so underplayed in the adaptation history of Antigone. Dwan’s bodily fluids are a mark of the performer’s labours in her bid to articulate the hitherto-silenced plight of Ismene. They also demonstrate Dwan’s mastery of voice, and recall her better-known role as the fast-talking, floating pair of lips of Samuel Beckett’s Not I in Walter Asmus’s production at the Royal Court Theatre London—a production so popular that it toured internationally for a number of years. In Not I, Dwan’s character spews forth words with beads of saliva fulminating at the edges. In the pre-COVID world, similar vocal exertions made by the actress in Pale Sister rang hollow for reviewers of the Gate Theatre Dublin production; Peter Crawley, for instance, characterised her enunciation of every sentence in a “growl to trill” as a “din” at odds with the poetry of the text.[xiv] Yet, adapted for the screen, Dwan’s vocal protests—figured through corporeal ejections—work particularly well to engage our multi-sensory connection to the drama. And in a world currently obsessed with showing bodies masked-up and prevented from emitting splutter and spray, Dwan’s bodily eruptions are a welcome transgression.[xv]

Pale Sister is currently available for viewing via BBC iPlayer until March 2022.

[i] Among the highlights of the Lights Up festival: Buttercup by Congolese Liverpool-based artist Dorcus Sebuyange; Half-Breed, a semi-autobiographical tale of growing up mixed race in Britain’s West Country by captivating poetess Natasha Marshall; Harm directed by nationally acclaimed Atri Banerjee; an RSC production of The Winter’s Tale starring Kemi-Bo Jacobs and Andrew French; a rewrite of Orpheus (full title, Orpheus at the Record Shop) by rapper Testament; the National Theatre of Scotland’s production of Adam (based on the life of transgender Egyptian-born Adam Kashmiry); and Yasmin Joseph’s play about the Notting Hill carnival, J’Ouvert.

[ii] As Tina Chanter suggests, feminists, in reclaiming Antigone, have nonetheless ignored the question of race and the role of Athenian slavery in the genesis of Sophocles’ tragedy. Tina Chanter, Whose Antigone? The Tragic Marginalization of Slavery (Albany: SUNY, 2011), xiii.

[iii] Both Guardian reviewer Helen Meany and Irish Times’ Peter Crawley reviewers have interpreted the title as a reference to Ismene’s history as “secondary character” (Meany) who is “[q]uiet” and “[d]ull” (Crawley). Yet the racial implications of the title should not be ignored. To quote Collin’s Dictionary, “if something is pale, it is very light in colour or almost white.” “Pale Sister Review – Colm Tóibín and Lisa Dwan’s twist on Antigone.” Guardian. 7 November 2019. https://www.theguardian.com/stage/2019/nov/07/pale-sister-review-colm-toibin Peter Crawley. “Pale Sister review: Colm Tóibín’s play more eager to meet a reader than a spectator.” Irish Times. 5 November 2019. https://www.irishtimes.com/culture/stage/pale-sister-review-colm-tób%C3%ADn-s-play-more-eager-to-meet-a-reader-than-a-spectator-1.4074369

[xiii] Mahsa Foroughi, “The Blurred Line Between Film and Theatre: An Experience of Simon Stone’s Medea at the Time of Pandemic.” Theatretimes.com. 1 May 2021. http://680.e22.myftpupload.com/the-blurred-line-between-film-and-theatre-an-experience-of-simon-stones-medea-at-the-time-of-pandemic/

[xv] One particularly striking image of this obsession was Andrew Kelly’s photograph from March 2018 of ballet dancer Ashlee Montague, who posed in the middle of New York’s Time Square in her leotard, her ballet shoes, and a gas mark. https://www.reuters.com/news/picture/photos-of-the-week-idUSRTS378WK 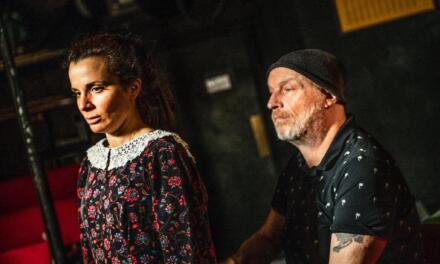