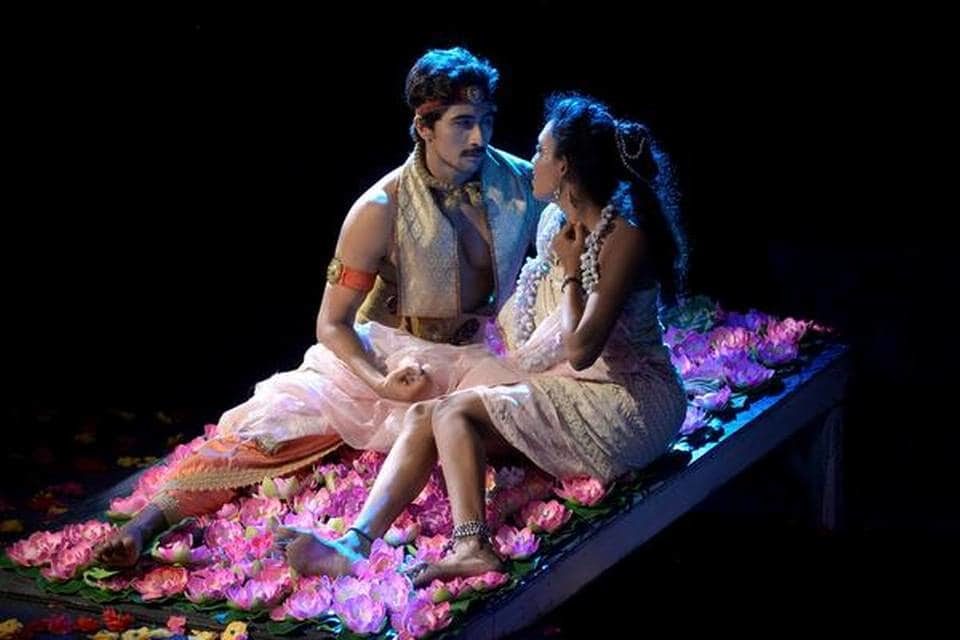 In Harmony: A scene from the play

Chandradasan’s adaptation of Shakuntalam, staged at the National School of Drama, had a contemporary ring to it.

Based in Kerala, Chandradasan is the founder and artistic director of Lokadharmi Centre for Theatre, Kochi, and a scholar of Indian theatre. He has been invited by European and American theatre institutions to direct plays and conduct workshops. Utilising this opportunity, he studied great traditions of theatrical art of those countries. This process has widened his horizon of theatrical art and his worldview. Connoisseurs of art in Delhi already have seen his productions which were featured at different festivals. His latest production of Kalisasa’s Abhijnanashakuntala  as Shakuntalam in Hindi, which was presented by the second year students of the National School Of Drama at Abhimanch in Delhi recently, charmed the audience with its visual poetry and deep insight into the multiple layers of immortal Sanskrit classic which was staged in leading cultural centres of the world. The director’s ingenious approach to collaborating with music composer, designer, and lyricist transformed the production into a metaphor of love, sensuality, beauty, and pain of betrayal that enraptured the audience.

The performance text is written by Amitabh Srivastava in Hindi. While retaining basic thematic strands, the text is tight and free from verbosity. Some elements like Durvasa’s curse as the catalyst to afoot further action has been pruned. Durvasa is not seen on the stage, we hear the echoes of his voice cursing Shakuntala for ignoring his presence. Of course, the element of fate is here that is responsible for making Shakuntala’s life tragic. Similarly, the loss of ring which Shakuntala is wearing on her finger given to her by king Dushyanta as a testimony of their marriage is downplayed. What is the motivating force of characters that lead them inexorably to a denouement that stirs the soul of the audience? It is the emotional conflict of lovers and their fundamentally different worlds that create dramatic conflict.

Delhi audience has the opportunity to watch this immortal piece of dramatic art by great contemporary directors in diverse styles with different interpretations. We have also seen its mesmerizing Russian version in ballet style. Veteran director the late K. N. Panikkar staged this play nearly two decades ago to illustrate the abdication of his duty of king towards his people as he is indulging in a romance with an adolescent girl. One of the scholars viewed this play as the sexual exploitation and betrayal of an innocent hill damsel by an urban-based ruler who has been already indulging in the acts of seduction in his Haram. This approach seems to be over implication and contrivance while dealing with an all-time great work of art. It has great poetry with a touch of eroticism, life-affirming landscape of forest sparsely populated. The people are completely in harmony with their environment. This gives the key to understand the beauty of living in an environment marked by joy and bliss. This is a world where profound serenity dwells – human, plants, and animals live in harmony.

Director Chandradasan has illustrated that a classic should not be treated as a museum piece but at the same time in the name of imparting its contemporary sensibility, its poetry and imagery should not be destroyed. The director discovers the universal elements that are relevant to the understanding of present social contradictions.

The novelty of the production is reflected in the use of beautifully written lyrics by Asif Ali set to lively and easily comprehensible tunes by Shubhadeep Guha which are at once tender, elegiac and joyous that reinforces various moods to deepen the conflict. This is arguably the first production of Shakuntalam in recent memory to have used a large number of lyrics which are intricately woven into the basic structure of the production.

The play opens in a dense forest near the hermitage of Sage Kanva who is away. In the hermit lives Sadhus, Sadhvis, Shakuntala and her adolescent friends. Suddenly King Dushyanta arrives on the scene, hunting a dear. The beautiful girls of the hermit object to his acts of hunting. Dushyanta also destroys demons who are torturing saints creating an obstruction for meditation and tranquillity of forest.

Then we watch the lush green trees, flowers, birds, and Shakuntala endowed with exquisite beauty, frolicking with her friends full of youthful exuberance. A love-lorn King Dushyanta is stunned to see the beauty, youth, and innocence of Shakuntala. The forest scene with Shakuntala lying on the bed of flowers and King Dushyanta irresistibly moving towards her who is possessed by Kamdev is delicately designed, transforming it as the Kingdom of sensuousness. Dialogue is sparse. King enacts marriage ritual with her in Gandharva form.

The climactic scene deserves special mention for its contemporary relevance, indicting patriarchal society. King Dushyanta disdainfully refuses to recognize Shakuntala who is having his baby in her womb. She unveils her face to show him that she is Shakuntala whom she has married. Another evidence of marriage is the ring which Shakuntala has lost on way to the court of the king. Soon enough the king discovers the ring and remembers the relationship between him and Shakuntala. An angry Shakuntala has left the court, King realizes his blunder, goes after her to bring her back but Shakuntala vehemently rejects his request. The whole scene is composed with remarkable finesse, bringing to the fore the hurt feelings of Shakuntala and her strong protest. It leaves a strong impact on the audience.

Snehlata S. Tagde as Shakuntala paints her character with deft strokes bringing to the fore many emotional shades of Shakuntala with telling effect. Somnath Chaterjee as King Dushyanta gives a creditable performance. Other members of the cast skillfully create the portraits of their characters to enhance the value of the production.

This article originally appeared in The Hindu on September 22, 2017. It is reposted here with permission.