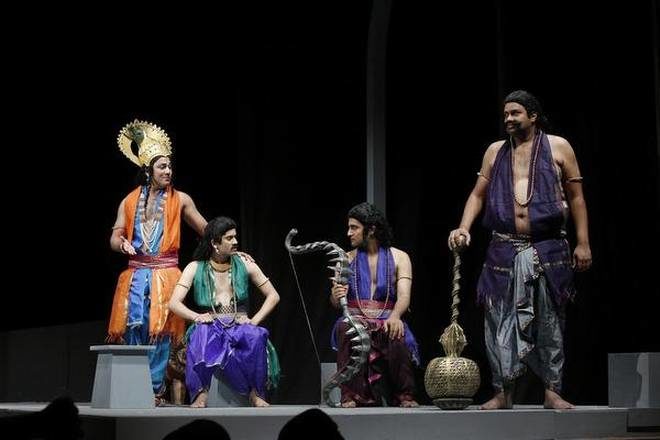 A scene from “Shastra Santan”

Rameshwar Prem, a recipient of Sangeet Natak Akademi Award, has written plays on a variety of themes ranging from contemporary issues to history and mythology. Almost all his plays have been directed by eminent theatre personalities like the late B.V Karanth, former director of National School of Drama, Ram Gopal Bajaj, and Alakh Nandan. Some of his frequently staged plays include Chaar Pai, Aajad Ghar, Camp, and Jal Damru Baaje. This past week Delhi’s audience saw his complex play titled Shastra Santan which was presented by Rang Sarathi, Faridabad at Abhimanch auditorium.

Set in the concluding days of Kurukshetra war fought between the Kauravas and Pandavas, the bloody visual imagery and the demoralized Kauravas camp signals that the Kauravas defeat is imminent. In the dark night, some soldiers in the disheartened mood say that they do not belong to any camp and fight for the one on whose payroll they are. The turmoil in the lives of the warriors comes to the surface and in combat, they kill one another mercilessly and even those gifted with invincibility are killed. Everywhere bodies of the mighty are strewn all over the battlefield.

Directed by Prof. Ashok Sagar Bhagat, a senior faculty member of NSD, the play depicts the life of King Dhritarashtra, who is blind and married to Gandhari. As per desire of the king, both beget 100 sons and only one daughter, Dushala, who is married to Jayadratha. Chronically ill Pandu has two wives — Kunti and Madri — who have five sons through the device of Niyoga. Kunti has a son before her marriage with Pandu. All these sons are given advanced military training by the great Brahmins of the time.

They are groomed into great warriors to man the most destructive war machine to become sovereign king. In Kurukshetra, these young warriors, as well as veterans belonging to the both Kauravas and Pandavas, unleash unprecedented savagery on each other.

As soon as the sun sets, it is declared that war has stopped and would be resumed the following morning after due declaration essential to adhere to the code of Dharma Yuddha. But as soon as night descends, the fighters are possessed with morbidity and passion for revenge indulging in beastly gruesome acts. We watch the dreadful personae of Jayadratha in the form of a shadowy image who brazenly declares to his wife Dushala that he will rape Draupadi in the darkness of the night as an act of revenge. In the dark stage, the light is focused on two severed heads that of Jarasandha and Barbari killed by Krishna. They would have changed the outcome of the Kurukshetra by killing Arjuna. Ironically Jayadratha could not succeed in his disgraceful act but his wife Dushala is raped by soldiers in spite of making her disclosure that she is the sister of Duryodhana. There are scenes depicting bitterly, lamenting wives of dead soldiers as well as of great warriors. Hidimba accuses Krishna and the Pandavas including her husband Bhima of sacrificing her brave and invincible son Ghatothkach to save the life of Arjuna.

With multiple images depicting turmoil, hatred and blood-soaked battlefield, the central image seems to be diffused. With a view to impart contemporary ring, the director has incorporated nuclear threat posed by the U.S. and North Korea. To express it visually, we watch marching parade by the soldiers of different nuclear powers that presents a threat to peace today. This trivializes the power of the epic.

The music score by Kajal Ghosh, veteran theatre music director, enhanced the epic power of the production initially but towards the end, his use of popular music tended to be incongruous.

However, Prof. Bhagat’s design was imaginative which captured the vast canvas of the epic theme. The lighting evoked moments of magic in the production at places. The concluding scene where widows led by Gandhari go to the battlefield to lament over the dead metaphorically highlights that despite holocaust, humanity survives and human life goes on.

In fact, every year we see plays based on the theme of the Mahabharat, focusing on its different aspects. So far Dharamvir Bharati’s magnum opus Andha Yug, an epic verse play, remains the most definitive piece of theatrical art and a milestone.

Keeping in view the complexity and vast canvas of the multi-layered play, it needs trained and experienced performers. But Prof. Bhagat’s cast largely consisted of amateurs. However, some of them display promise of good performers. Abhimanyue Bhagat as Indra and Ghatothkach, Sanjeev Ahuja as Jayadratha, Rakshandha Kapoor as Dushala, Neeta Aneja as Hidimba and Ankur Kaushik as Krishna acted admirably.

This post originally appeared on The Hindu on May 11, 2018, and has been reposted with permission. 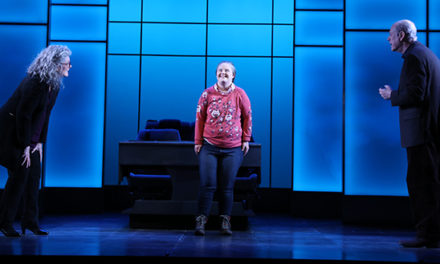