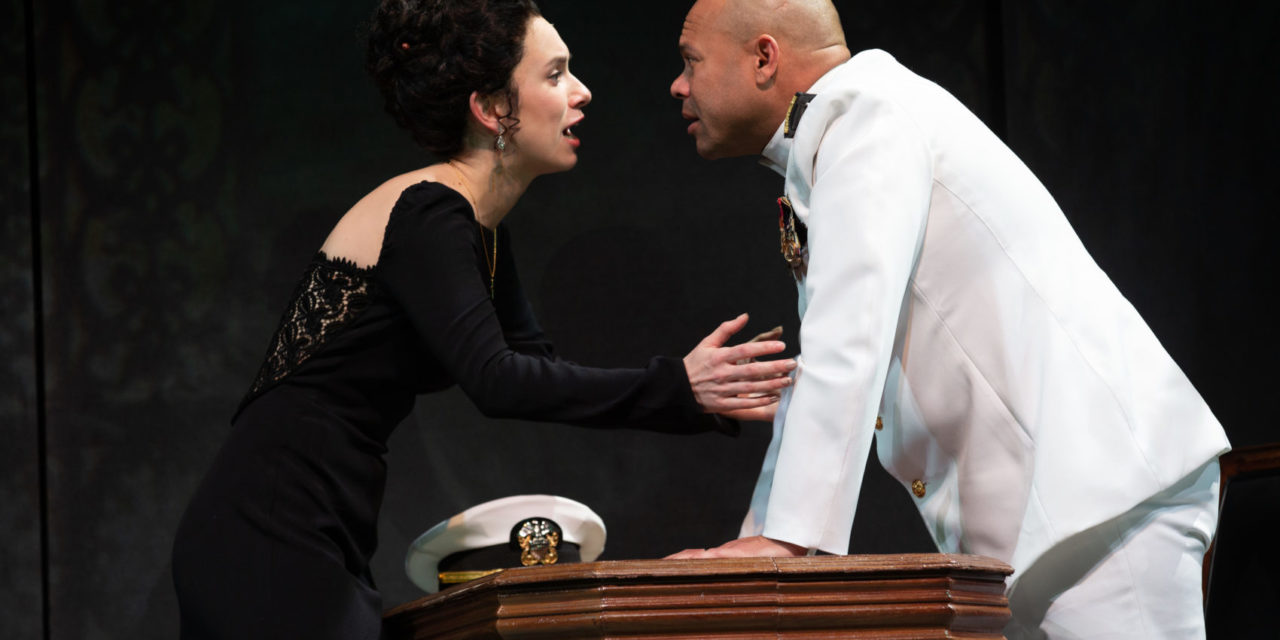 An updated version of Othello now playing at the American Repertory Theatre in Cambridge originated at the renowned Oregon Shakespeare Festival. Director Bill Rauch was interested in exploring the similarities that he believes underlie the play with the problems and politics of today’s U.S. where prejudice against people of color, ethnic minorities, and immigrants looms large. The tragedy’s misogyny is still with us today although attempts are being made to eliminate it. Rauch’s cast was chosen in part to make the play match the U.S.’s society more closely. In a cast of twelve, there are only four white actors. Half the actors play a second role.

Likely because of the importance of boats, a storm, the destruction of the Turks at sea, and the island of Venice’s dependence on the Mediterranean for its riches, Shakespeare’s sixteenth-century army became a twenty-first century American navy with Othello (Chris Butler) smartly dressed in a white uniform as the admiral.

The play revolves around Iago’s (Danforth Comins) desire to destroy Othello who despite being a foreigner has become the military leader of Venice. When the less experienced Cassio (Derek Garza) is given the rank of lieutenant by Othello, Iago is consumed by jealousy and fury. Not only is Cassio an inferior fighter he is Florentine as well, which marks him as an outsider. Iago has an ally in the foolish Roderigo (Stephen Michael Spencer) who is in love with Desdemona (Alejandra Escalante) newly married to Othello. The first step of Iago and Roderigo’s revenge is to awaken Brabantio (Richard Howard), a Venetian senator, to inform him that his daughter has eloped with Othello. Iago uses vulgar imagery and language to describe the couple’s wedding night. The three men are equally racist.

Brabantio goes to report to the duke of Venice (Richard Elmore) Othello’s use of sorcery to win Desdemona. The duke is in his office on the telephone discussing the upcoming war with the Turks over the isle of Cyprus. Among the senators with him is Gragantia (Gragantio in the original), Desdemona’s aunt (Vilma Silva), the only female senator. The Duke and the senators need Othello to fight the enemy.

After explaining that she married Othello for love, for his intelligence, and for his bravery, Desdemona is granted permission to go to Cyprus. She arrives there in the company of Iago, a disguised Roderigo, and Emilia (Amy Kim Waschke), Iago’s wife and a petty officer in the navy. She will become Desdemona’s maid, a relationship that turns into friendship as well while retaining her navy position. In the course of awaiting Othello, Iago teases Desdemona who holds her own despite her discomfort.

Othello reaches Cyprus later than anticipated having been held up by a storm that destroyed the Turk’s navy. He and Desdemona are overjoyed to be reunited. He calls her “my fair warrior” perhaps the greatest compliment he can give since it seems to put her on par with him. She delightedly greets him with “my dear Othello,” one of the few times he is called by name. Most often he is referred to as the Moor. In Cyprus Othello is unprotected by the government and Iago is freer to carry out his plans. He manipulates virtually every character. Danforth Comins is an excellent Iago who enjoys his revenge. In the course of the performance, he races around the theatre several times at top speed in his haste to destroy the “Moor” and in so doing put an end to Cassio. Several times he is referred to as “honest Iago” most often by Othello. That Iago can cause Othello to believe his beloved Desdemona is unfaithful is an example of the play’s misogyny and Othello’s insecurity as a black man who converted to Christianity to fit more easily into Venetian society. Comins is particularly interesting when the lights come up and he gives his soliloquies directly to the audience.

Othello is much older than his beautiful and at first confident wife who regards him as a role model. She falls into Iago’s plot when she tries to help Cassio regain his rank. Iago also induces his loyal wife to give him the handkerchief she found when Desdemona dropped it. The handkerchief, Desdemona’s first gift from Othello that he believes she gave to Cassio is proof of her infidelity and therefore reason to kill her.

Iago stabs Emilia to death when in a fury she tells the “dull Moor” that Iago had initiated the plan to have Othello kill Desdemona.

The fast-moving production did not cut the text. However, since the actors spoke in the rhythm of everyday American English and did not use iambic pentameter, the time length could be shorter. Chris Butler’s speech differed since English is not the character’s native tongue. It runs for three hours and fifteen minutes. There is also a fifteen-minute intermission.

Christopher Acebo’s set is multi-purpose. At the opening, the audience sees a wide black scrim upstage with a door center stage and a high window to its left. Down front, there is a ramp that comes from the stage to the auditorium. Once the play moves to Cyprus there is a golden brown stone wall upstage. Embedded in the wall is a row of television sets that are sometimes turned on as for example when the set is supposed to represent a gym. At other times they show the sea. When Othello is about to smother Desdemona, a large bed rises from the floor.

This article first appeared in Capital Critics’ Circle on January 28, 2019, and has been reposted with permission. 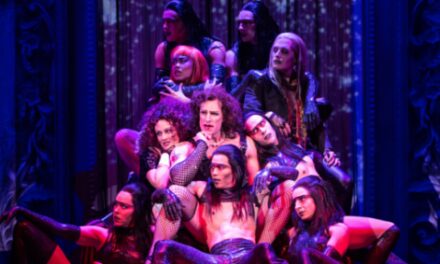 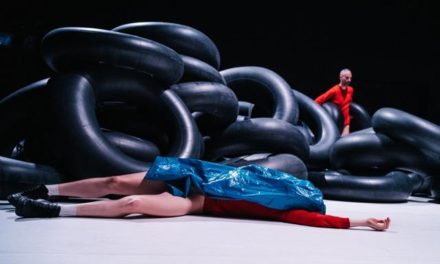