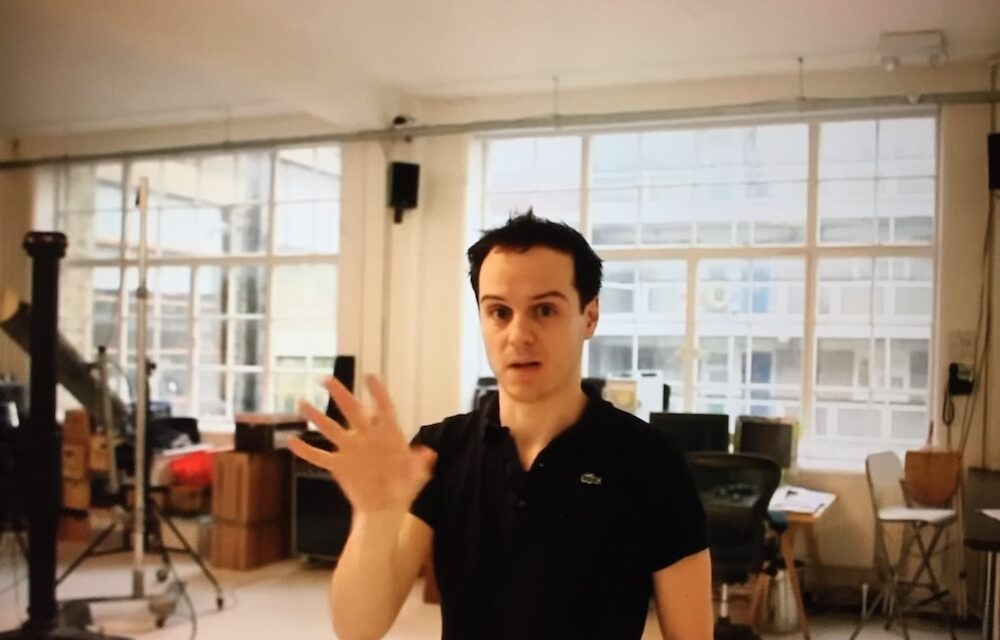 Lockdown occasionally spawns some real delights. Like the surprise appearance of a strange creature from the most profound depths. One of these must be Andrew Scott’s superb performance in Simon Stephens’s Sea Wall, a magnificently imagined monologue that demonstrates both the actors and the playwright’s mutual versatility. The piece was originally commissioned by Josie Rourke when she was artistic director of Bush Theatre, and the theatre space got flooded in 2008; the short one-man play was designed to be performed in daylight, and written in three weeks.

It begins with Alex, a 31-year-old photographer, describing his relationship with his father-in-law Arthur, a retired British soldier with memories of Northern Ireland and the Falklands, and the rest of his family: his wife Helen and young daughter Lucy. The character is naive, quirky, idiosyncratic, enquiring, and as raw as an exposed nerve. Andrew Scott is chatty, emotionally open, and gradually more and explicit in his anger, performing with a rare intensity and integrity. The detail of the writing and the intimate feelings described are like a punch in the gut.

Filmed in a cluttered but empty rehearsal space, with a single fixed camera which is switched on by Scott himself, the monologue comes alive thanks to the actor’s supremely confident control of both the words and space. He gestures, he picks up a bottle of water, he walks around. At some points, he pauses, excruciatingly; or strolls out of view.

The sea wall, a precipitous drop into unknown blackness, is a wonderful metaphor of all the ghastly, yes really horrible, tragedies that lie underneath the placid surface of sunny everyday life. Needless to say, this is even more acute to us in this time of the pandemic. The piece was originally performed by Scott 12 years ago at Bush Theatre, directed by George Perrin, and was later revived in 2018 at The Old Vic. The 2011 filmed version is directed by Stephens and Andrew Porter.

I remember reading Sea Wall when it was originally published, and I was not very impressed. I thought it was over-written. But then I hadn’t seen Scott perform it. Now I am a convert. This is our humanity. And sheer genius.

This article originally appeared in sierz.co.uk on May 15th, 2020, and has been reposted with permission. For the original article, click here.