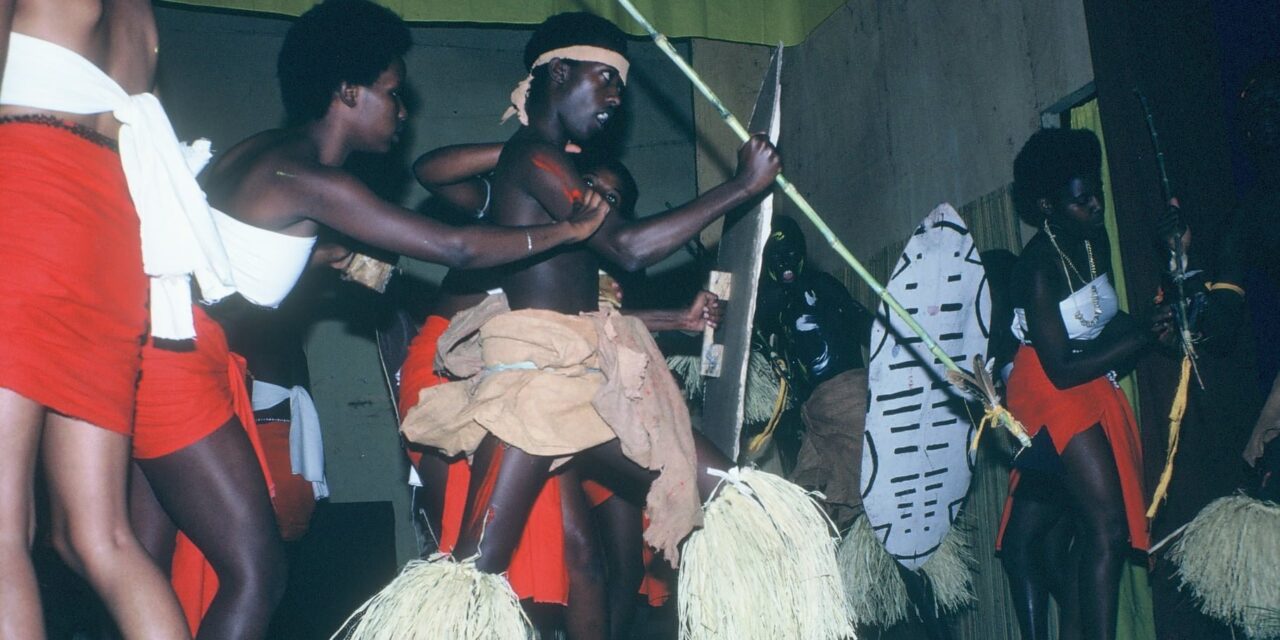 STEM, that Science, Technology, Engineering, and Mathematics curricula obsession at the expense of the arts, leaves our children as properly endangered species. Readers of Charles Dickens’s Hard Times may recall Mr.Grandgrind’s what-else-but-a-vain school where pupils’ imagination is stifled, fiction suspended, and the circus frowned upon. Oh, how different from Namasagali College!

Namasagali College and Its Curriculum

Ensconced on the banks of the Nile in a rather rural Eastern part of Uganda, Namasagali College enjoyed a serenity for studying and artistic creation; the river breeze en-route to Egypt seems to have breathed a considerable degree of muse for creative intensity into the sinews of the Sagalis, as the students of the College referred to each other in the 1970s, 80s, and 90s. Namasagali College, where a student’s life was complete and replete with play both indoor and outdoor; Namasagali, where the school system gave an audience to the student to observe the self and the other; Namasagali– with its extra-curricular regimentation that made it mandatory for every student to learn how to dance, to act, and to recite a poem– is certainly not a place for the timid, the feeble-limbed, or those with tremors in their voices. It was a place for the bold, the creative.

With its emphasis on sports, dance, drama, and music, Namasagali espoused the true definition of holistic education when many post-colonial secondary schools in Africa were using bookish pedagogies. The attempt to build the three H’s of the learner: the Head, the Heart, and the Hands is what made Namasagali enviably unorthodox. Grace Flavia Ibanda, a dance professional who was a student at the school, and would later return as a swimming and ballet instructor, stresses that those are “the things that build character, enable you to negotiate space, negotiate time; work with different people, with any resources.”

Who cares that the students had no tap water? That they had to go to the river to get water? That the school facilities were quite rudimentary? Who cares? Their motto was “strive regardless,” and indeed they strive. The premises, until 1965, had been a railway station, before finding a new use. The main hall, where all the Namasagali dramas were hatched before finding their befitting place at the National Theatre in Kampala, had been a warehouse. But parents, including the president and his ministers, sent their children to Namasagali to partake in the rich cultural nourishment that included, among others, a compulsory dance on Saturdays, annual beauty contests, creative dance competitions, poetry recitals, and a drama festival. Forget drooping over calculations, maps, or passages in the classroom all day long: classes in Namasagali would end at 1:30 pm. The afternoons were reserved for co-curricular activities. “The vibrancy and variety of these activities augured well to even new students coming from diverse backgrounds; they were popular and made school fun,” says Raymond Rushabiro, an old boy and one of the much sought-after actors in Uganda today.

The Namasagali College we are talking about was an exquisite handiwork of the Rev. Fr Damian Grimes. He was a Roman Catholic missionary affiliated to the Mill Hill Fathers, who headed the school between 1967 and 2000. A robust character through and through, Grimes had been a boxer in the earliest years of his career. The game that had hardened his body had not spared his spirit. His spectacles must have gleamed whenever he read Proverbs 13:24, “for the good Father never spared the rod, lest he might spoil the child.” His antennas were quick to feel a wrongdoer even from a distance. His nostrils could have been specially made to catch the smell of waragi on any wayward child who sneaked out of school to have gin at Katrina’s pub. Sometimes, the crimes Grimes detected would be as small as “idle gazing.” He was not a mere Father Grimes. He was Father Grimes.

Yet, beneath this militaristic disciplinarian was a humane, visionary headteacher who believed in the success of every child. “He used to say that if you have a voice, you can sing; if you have legs you can dance,” recalls Rushabiro.

Kwezi Kaganda, a playwright, screenwriter, and creative director of Fun Factory Uganda, who frequently shared a Guinness with him after a day’s teaching, says that Grimes was easy to get along with if you were assertive: “He wanted people who could stand up for themselves. He wanted people who knew what they wanted.” You only have to meet an old Namasagali student to see what Kwezi means, or to understand Fr Grimes’s intent. When he, for instance, discovered that boxing was a violent sport and limiting when it came to developing confidence and speech, he replaced it with acting.

Fr Grimes never went wrong with this. Acting and dance became the hallmark of Namasagali College experience. The Sagalis became the cynosure of delighted eyes whenever they came to town to perform. Kampala would, as the millennial parlance goes, be on fire. Revelers would turn to the theatre to see these students who sang beautifully, as though they washed their voices with honey; danced as if they had no bones in their waists; or played like the roles had been God-tailored to them. Young men would come to see the beautiful Sagali girls, who turned heads with their fancy red dresses; other schools came to listen to students, who spoke with such laudable eloquence, precision, and correctness.

From 1978 until around 1998, Namasagali College managed to put up annual theatre productions. The plays written, adapted, and directed by Grimes with a team of writers like Kaganda and choreographers such as Sandra Jones, were eclectic, but, by and large, dramatic plots laced with music and dance. The cast was usually big. Casting was based on systematic executions, with students who had excelled in inter-class and inter-house competitions taking premier roles. Those who enjoyed Namasagali College on stage should have known that with Fr Grimes’s pedantry, those impressive performances were hewn out of rigorous training. “It was a whole lot of drills and exercises,” says Rushabiro, “singers had intensive vocal training. There were classes on human anatomy and physiology for actors and dancers to be aware of their bodies.”

With Fr Grimes being an expatriate headteacher, one may be tempted to think that the theatre productions were entirely Western and exotic. On the contrary, Namasagali gave the plays an African feel and bearing. Song of Bantu (staged in 1978), for example, had spine-tingling Zulu dances. Spanish Romance (1991) and Great Caesar (1989) were infused with the rich music of West Africa. Namasagali took such deliberate attempts to Africanize the dramas: some of these dramas were actually on familiar African subjects like Shaka, the Zulu hero, in Song of Impi (1982). That way, with a repertoire of about 20 musical and dance dramas, Namasagali exhibited her artistic flair on the Ugandan stage like no other school had ever done.

The early 1980s and the 90s were a sort of cultural renaissance for Uganda. Pundits have called the age the true apogee of Ugandan theatre. We may believe them if we consider the numerical edge the age had over others. The proliferation of plays, performance spaces, or theatre companies in the country between 1986 and 1998 has, after all, surpassed any period. Coincidentally, it is around this time that theatre gave rise to other arts and media. In all these developments, it was not hard to trace the inspiration or influence of Namasagali College. FM radio stations like Sanyu Fm and Capital FM sprung up, with Namasagali old students in deejaying and presenting roles. For the first time, comedy came to the mainstream stage. Top theatre companies like Ebonies and Theatre Factory could not look further than fishing from Namasagali the incredible talents of Kaganda, Rushabiro, and others. Then there was this sensational dance-cum-singing group, “The Obsessions,” led by Ronnie Mulindwa and, at first, composed of only Namasagali old students.

The Namasagali Midas touch went beyond the arts. What did you expect? Someone who has been grounded in acting, dance, and music is bound to succeed wherever they go. Thus, it wasn’t surprising when New Vision’s Robert Kabushenga and BBC’s Nancy Kacungira became top names in the media, or when Owek. Apollo Makubuya, Speaker of Uganda Parliament, Rt. Hon. Rebecca Kadaga, and Dr.Miria Matembe swam effortlessly into law and politics. The academia has Namasagali OBs Prof. Wasswa Balunywa, while the business and private sectors have Patrick Bitature and Charles Mbire. The list can go on from Genesis to Revelations, revealing a Sagali smart in any career they chose, revealing that theatre arts, especially if passed on early, can translate into life-long skills and values. This is the secret that Namasagali College knew.

You may have noticed that the school is referred to here in the past. It is no mistake.  Namasagali College is now in shambles. The dereliction of this once beautiful human endeavor can reduce you to tears. The walls are crumbling, the ceilings are falling in, the place smells of mustiness, of nostalgia, of half-lifelessness. All this started when Fr Grimes retired and returned to England. The next time you see him, if he went with Namasagali College, please tell him to return it. It is missed here. Of course, there is an attempt by the old students to renovate and revive the past glory and cultural traditions of the school. We are already pinching our prayer beads for this. With this hope, Namasagali College will strive and become the arts hub it was once before.

Even then, the degree of achievement, the fruits that drama, dance, and music, and the role that theatre arts play in the after-school life of a child, as seen in the Namasagali alumni, should not be taken for granted. School has been described as a cradle for knowledge, values, skills, and innovation. If “it is the supreme art of the teacher to awaken joy in the creative expression and knowledge,” as Albert Einstein once argued, then the arts should be at the center of education.

This article was originally posted on The African Theatre Magazine on Saturday, June 13, 2020. To read the full article, click here