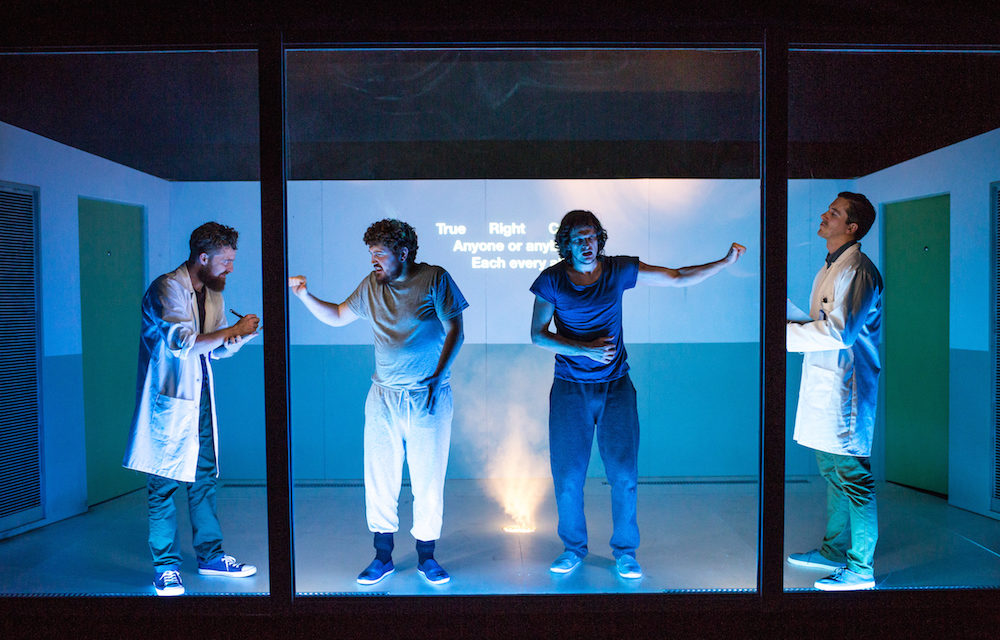 It’s all about the casting. The paradox of playwright Sarah Kane’s short career is that while her writing was exceptionally radical in form and content, many British productions of her work have been rather conservative in their staging. And nowhere is this clearer than in their casting — often all-white and predictably gendered. Yet there is no reason why the Soldier in Blasted shouldn’t be of a different ethnicity to Ian and Cate, nor why the characters in Phaedra’s Love and Cleansed and Crave shouldn’t be non-white, or more diverse than they usually are. And, when it comes to 4.48 Psychosis, there’s a gender issue. I have been arguing for years that the pervading idea that this play is mainly about the female experience, and by extension just autobiographical, should be rigorously challenged—on stage.

Now at last my prayer has been answered. Deafinitely Theatre currently brings a bilingual approach—spoken English and British Sign Language—to the play, using an all-male cast. And this fresh and original interpretation seems immediately to inject this brilliantly written play, which has an open text (no specified characters, no specified location, and no linear plot), with a good dose of high energy. Although loosely based on Kane’s experience of profound depression and her suicidal urges, the play is not a straight autobiography but more of a fantasia, a poetic meditation, on the themes of love, mental distress, and desperation.

Deafinitely Theatre’s artistic director Paula Garfield, along with designer Paul Burgess, have set the play within a glass-fronted cube, part mental hospital, part unspecified institution, and divided the cast of four into white-coated doctors (Jim Fish and Matt Kyle) and tracksuited patients (Adam Bassett and Brian Duffy). The effect is aptly claustrophobic and the audience peers into this fish tank with all the discomfort of voyeurs, the uninvited guests at someone else’s misery. The effect of having an all-male cast is to remind us that acute psychological distress is not just a female experience and that Kane’s writing is more universal than autobiographical. The acting is strongly, often fiercely, masculine, with a powerful sense of threat, tension and danger.

Although 4.48 Psychosis has no traditional story, the text conjures up a series of recognizable incidents: doctors run through a checklist of symptoms, a litany of drug treatments and their results is analyzed, there’s a conversation about self-harming, acute mental distress is shown, and always the running theme is of unrequited love, and the subjective feeling of rejection. There are short passages of fine writing, internal monologues, diary entries, excerpts from self-help books, and small blazes of spirituality. The dark glory of “Remember the light and believe the light” runs through the play. Other parts explore the sensibility of an agonized self-consciousness: “It is myself I have never met, whose face is pasted on the underside of my mind.”

Garfield’s version uses three ways of communication—spoken English, British sign language and projections of extracts from the play text — to achieve a thrilling and exciting effect. Sometimes the actors use both spoken word and sign, sometimes they just sign and sometimes the projections work alongside signing and speaking. This gives a verbal density to the evening, even if the general effect is more evocative than literal, poetic rather than prosaic. The acting, especially by Kyle and Duffy (who each have extended solo pieces), is committed and enormously expressive. The effect of what you could call full-body signing is to create an indelible sense of how a psychological condition can grip your whole person, the entire body as well as the mind.

While Garfield plays down much of Kane’s bleak humor, and some passages of the text are accessible more to those who understand signing than to those who don’t, the emotional effect of the performance is to emphasize the feelings of loneliness and exclusion experienced by anyone suffering from depression, as well as the wild churnings of a psychotic episode. At its best, this revival throws off many of the usual interpretations of the play and creates a reborn imaginative landscape that feels startling alive in its conception and its execution. It captivatingly proves that Kane’s play text can release any number of new images, enhanced here by Joe Hornsby’s lighting, Chris Bartholomew’s sound, and Alim Jayda’s movement.

This production also succeeds in Garfield’s stated aim of not only presenting a difficult contemporary classic from a deaf perspective, but also in reminding us that deaf people are more likely to experience mental health issues, such as depression, anxiety, and suicidal thoughts, than the hearing population. The company confronts this with inspiring courage and imagination in a production that is positively and enjoyably Continental in its flair and its passion. The spiritual passages have a muscular energy, and some of the stage images—doors slamming in faces of patients; picking a doctor’s pocket; two men hugging intensely—stay with you. The feelings of suppressed violence, tough love, and hopeless desire are communicated in a way that encourages audience introspection. Yes, it’s hauntingly beautiful.

4.48 Psychosis is at the New Diorama Theatre until October 13.

This article first appeared in Aleks Sierz on September 21, 2018, and has been reposted with permission. 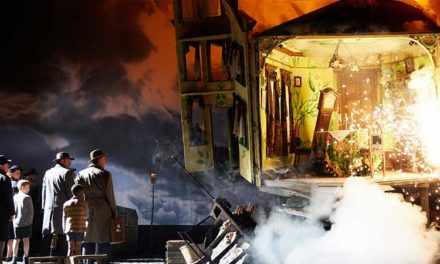