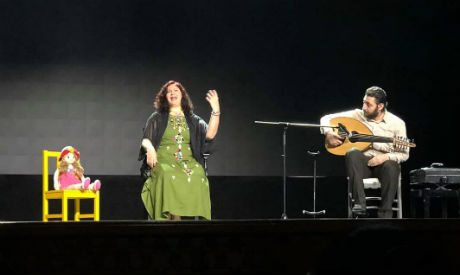 Samia Jaheen’s performance was part of the 10th Hakawy International Arts Festival for Children, which took place between the 2nd and 8th of March.

At the premises of the Tahrir Cultural Centre, as part of the Hakawy Festival, Ewart Hall was packed with eager young faces who flocked to listen to artist Samia Jaheen as she shared her folk story gems with the audience once again.

A truly talented storyteller and a great performer, Jaheen took the stage and started weaving stories from our childhood as colorful patchwork. Opening with “The story of all stories” was a great choice. Adapted from African folk tales, the story was about a small spider who managed to save all the stories of the world.

Then she tells about the story of the rabbit whose house was broken into by a monster, how he was scared to get inside and reclaim it, how all animals but the slowest (the turtle) managed to get in and realize that the monster was nothing but a small worm with an amplifier.

Di El-Hekaya (This is the Story) is the name of the project that Jaheen started around three years ago where she safeguards and transcribes folk stories for children. After launching her first CD two years ago, Jaheen takes us into a magical trip to hear about more stories that she transcribed, re-wrote and safeguarded.

Despite stating that “fun is the moral of the stories I depicted,” Jaheen’s stories by default strike cords of basic human values: How fear is our greatest enemy, how courage comes in various sizes and how love and friendship flourish in the most unlikely places; all are subtly woven in her stories.

Jaheen’s stories touched upon the audience’s nostalgia as she incorporated in her final story on stage segments from the song ‘El-Beyanola’ with lyrics by her father poet Salah Jaheen and music by prominent composer Said Mekkawy.

The brilliance of this part of the performance is the way Jaheen sails smoothly from representing the two characters of the story, vocally speaking while chanting the segment. As the story unfolds into a profound friendship between a lonely lion and a happy sheep, together they roamed the world and chanted in praise of friendship and love.

“I believe that the art of storytelling in its authentic form is coming back, and the kids are really enjoying it,” Jaheen concluded.

This article was originally posted at english.ahram.org.eg on March 11, 2020, and has been reposted with permission. To read the original article, click here.