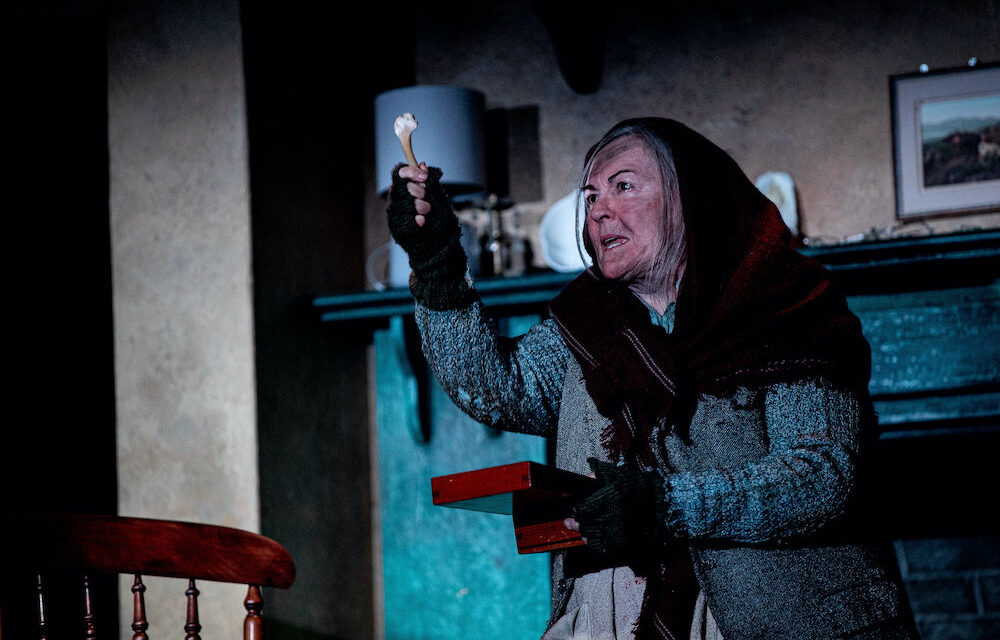 Gwen Taylor in "The Croft." Photo by Charlotte Graham.

With everyone in lockdown, observing physical if not social distancing, a story about isolation can have a particular resonance. And there are few places in the UK that are as isolated as some parts of the Scottish Highlands. Ali Milles’s tartan gothic thriller The Croft is partly a study of the advantages and disadvantages of living in a remote location, and partly a more speculative and suggestive account of how family tragedy repeats itself down the generations. This staging, an Original Theatre production, was touring the UK until the lockdown happened, and this quickly filmed recording is now available from the company’s website.

Set in a former crofter’s hut in the deserted village of Coillie Ghille, in the remote north-west Highlands, the story, very loosely based on real events, begins with two women arriving for a weekend getaway at what looks like a holiday home. Twentysomething Laura and fortysomething Suzanne are lovers who want to leave the big city behind and spend some quality time together. This is not as easy as it sounds because while Laura, who it soon emerges used to live here, is keen to introduce Suzanne to the pleasures of cold-water swimming and upland walking, the other is more anxious about her estranged husband and her two teenage sons — cut off from her because it’s impossible get a mobile signal up here.

With the unexpected arrival of David, an old family friend, links are established with the past. Some 10 or so years ago, Ruth — Laura’s mother — was living here, estranged from her daughter and her husband Tom, a hippy turned priest. She had recently been diagnosed with a serious illness. What she did next will tear into the life of her daughter, just as the actions — back in 1875 — of another croft dweller, old Enid, will affect the life of young Eilene, whose pregnancy outside marriage has already scandalized the locality, symbolized by Patrick, who wants to root out “the devilry and blasphemous abominations that have taken place in this stinking hovel.”

The Croft explores the theme of love and asks whether it is possible to create anything apart from a conventional family in the face of local prejudice and religious beliefs. Same-sex relationships and having children out of wedlock both defy the Presbyterian Bible-bashers of the region, and this conflict does not always end well. Added to this, Milles has strong ideas about the spirit of place, and shows how a specific house can be haunted by the pain of previous inhabitants. Such manifestations as ghosts and poltergeist might be condemned by the religious as witchcraft, but they symbolize the sense that a location can communicate feelings of its own emotional heritage.

Milles has skillfully plotted this material, along with some insights into the history of the Highlands which feel just a bit didactic, and uses familiar haunted house tropes as well as some of the conventions of the well-made play (the secret letter, for example). This conventional approach works well in terms of storytelling, although perhaps it is at odds with the anti-conventional social attitudes the piece espouses, but the playwright’s language is rather unremarkable, with the exception of a couple of passages, such as Enid’s dramatic “Blood on the turf” speech. I wanted more of them. Sadly, the tight narrative becomes increasingly passionate and overwrought, especially towards the end, and this show will appeal mainly to those who enjoy supernatural visitations and don’t mind melodramatic solutions to life’s many problems.

Directed by Philip Franks and starring Gwen Taylor, familiar from Coronation Street and Heartbeat, as the angry and anti-authoritarian Enid, the play’s cycles of grief and loss come across well in this film, which was produced rapidly and without an audience just after the whole country shut down venues for the scheduled tour. Under these conditions, the filming is remarkable for its clarity, although a bigger budget would have allowed more close-ups. The performances are all good, with Lucy Doyle as Laura/Eilene and Caroline Harker as Suzanne/Ruth, well supported by Drew Cain as David/Alec and Simon Roberts as Tom/Patrick. Adrian Linford’s evocatively creepy set gives the piece atmosphere, but its tragic narrative won’t be to everyone’s taste.

This article was originally posted at sierz.co.uk on March 27th, 2020, and has been reposted with permission. To read the original article, click here.