Cast of Bottom of the Ocean. Photo by Chia Kwa.

Whispering the word BOTO into the speakeasy-style window of a door, I felt a sense of trepidation, adrenaline rush, and giddiness. The latter came from the feeling that I was about to participate in a secret event. And in a way, I was. Bottom of the Ocean is the latest immersive production of Houseworld, an experiential theater company based in Brooklyn. Bottom of the Ocean, or BOTO for short, creates a surrealist sensory atmosphere around ritual for audience members to go on their own personal guided journeys.

Though BOTO doesn’t have a traditional plot, it wouldn’t be hard for individuals to infer their own. At first, the seascape-filled lobby area and the seaweed-strewn costumes conjure up callbacks to Cthulhu. And while the production does showcase Lovecraftian aesthetics, this isn’t a horror show. It’s both creepy yet whimsical—”whimsicreepy.” Think Hayao Miyazaki’s Spirited Away or Henry Selick’s James and the Giant Peach. The deep-sea designs of creator Andrew Hoepfner and costume designer Laura Borys disseminate these undercurrents.

BOTO also calls to mind the games The Legend of Zelda and Resident Evil Village through some light puzzle mechanics and eery environments, but nothing jumps out for the sake of scares. Guests are encouraged to say “hover” if they don’t want to be touched and may communicate with any performers if they feel unsafe. Low lighting, sometimes almost pitch dark, creates a conspiratorial mood, but some guests may want to ask the performers for guidance in these sections.

The production does stagger the audience through having certain sections where one is alone, but these were so engaging that I didn’t even think about their practical purpose until later. Audience members also have the option when buying tickets to attend in pairs or by themselves. Going in a pair provides a chance for bonding, ideal for partners or close friends and family. Meanwhile, going solo offers an opportunity for reflection—and access to an extra room that felt to me like the epitome of the experience.

The experiential dramaturgy of the production sets up simple asks for the audience that get deeper and deeper as one moves from room to room. An early ritual has audience members shares occurrences from their day, priming them for a later event that allows audience members to whisper a secret either into the ear of a performer or into a conch shell. Likewise, the mechanics around these rituals become more intricate as one delves deeper through the sights, sounds, and yes, even smells of Bottom of the Ocean.

At one point, walking through the whimsicreepy world of BOTO on my own little journey, I couldn’t help but smile. I felt like I was living through a real-life quest in some fantastical land. The best kind of immersive theater gives us that feeling of the sublime, breaking up our day-to-day routines with a fanciful diversion that reminds us of the wonder in our world.

And while this feeling at that moment happened by chance, BOTO seems intent on shaking up our quotidian existence. Part of the thrill of the show stems from exploring subjects that society typically shuns—questions around repentance, death, and spirituality surface in BOTO. In carving out set pockets of time to explore these themes, BOTO can feel highly therapeutic. Of course, some people may not wish to take the bait, which is allowed. But those who do stand much to gain from the experience.

Immersive theater can be viewed as a niche, the weird decadent cousin of proscenium theater. Yet BOTO brings theater back to its roots in a roundabout way. Leaving the production, I felt a genuine sense of catharsis—tension released from my body through soothing sound baths and curative conversation. Bottom of the Ocean offers the ritual of theater at its most resplendent. Isn’t that what more theater should aspire towards in its presentation? 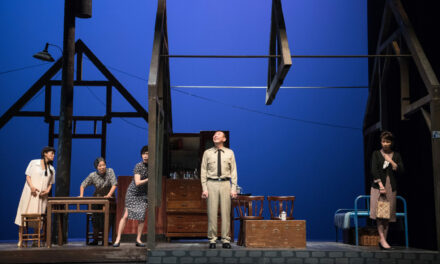 An Interview with Stan Lai on “The Village,” His Artistic Vision, and Hong Kong