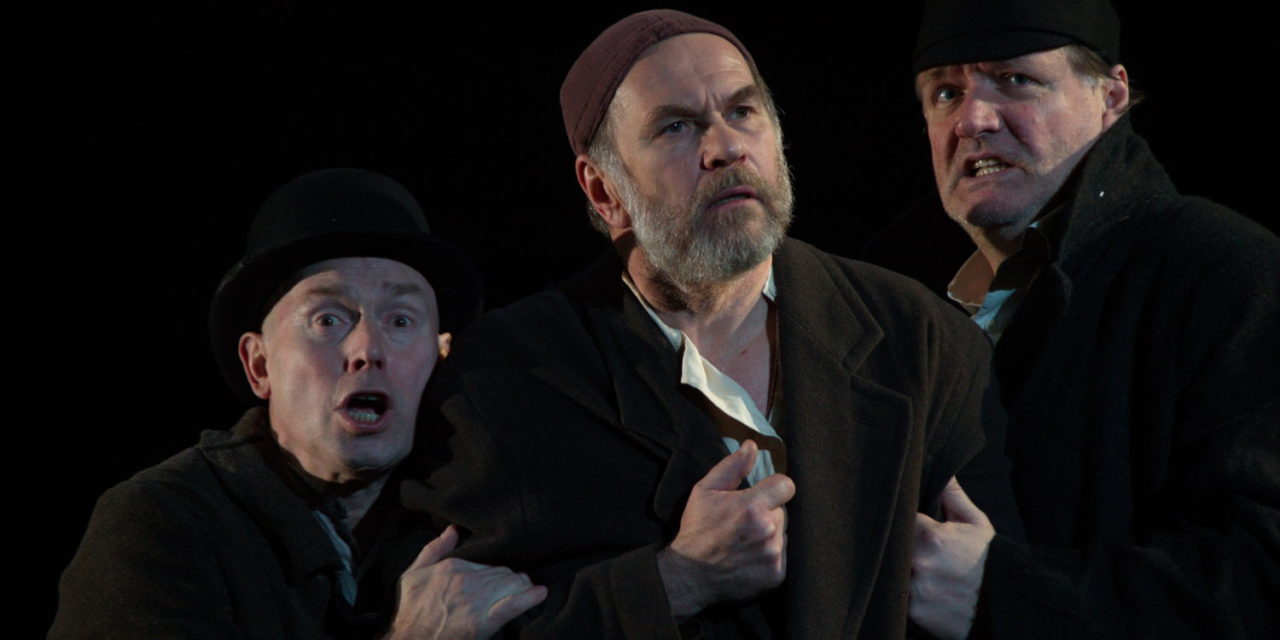 V. Sukhorukov, A. Guskov, and V. Simonov in the play "Smile Upon Us, Lord" at the Vakhtangov Theatre. Photo courtesy of Stage Russia HD

The third season of the international project Stage Russia HD continues. In February, the film premiere of the play Smile Upon Us, Lord, from the Moscow Vakhtangov Theatre will take place on the screens of Great Britain and America. At the heart of the dramatization are two novels of Grigory Kanovich, A Kid For Two Pennies and Smile Upon Us, Lord. The performance is directed by the artistic director of the theatre, Rimas Tuminas, and it features Vladimir Simonov, Viktor Sukhorukov, and Yulia Rutberg. In the role of the water carrier, Shmule-Sender is the brilliant Russian theatre and film actor Aleksei Guskov. In an exclusive interview, Aleksei Gennadievich talks about his character, shares his impressions about working with Tuminas, and discusses his film roles. 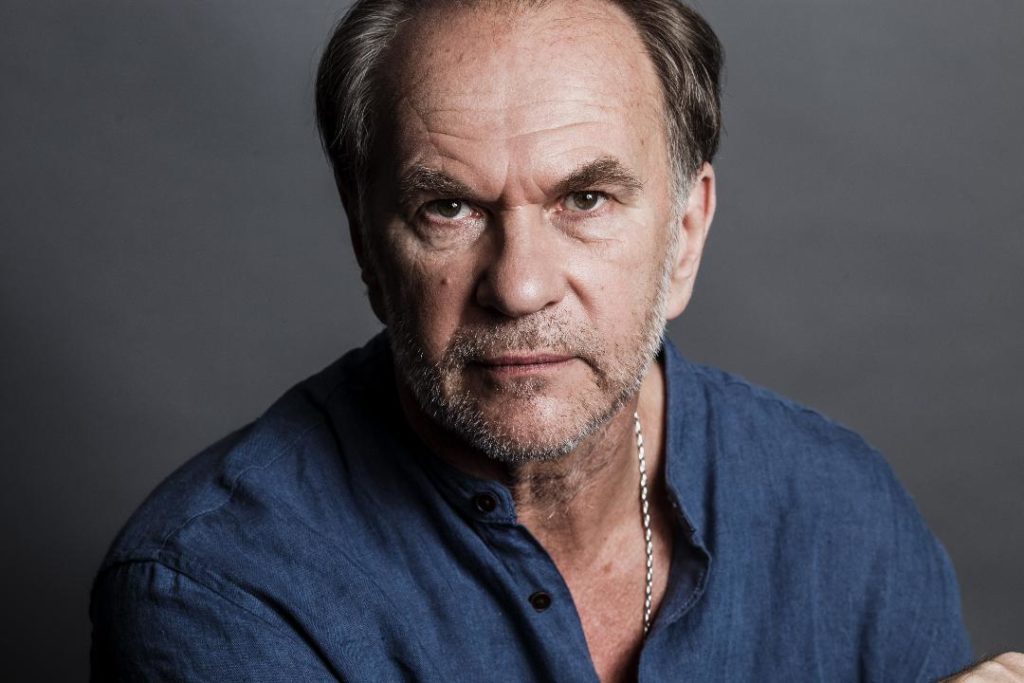 ELKIN: Was it a surprise for you when Rimas Tuminas offered you the role of Shmule-Sender?

GUSKOV: Of course. Smile Upon Us, Lord was the first performance I made with this great, talented artist. I asked Rimas why he saw me in this particular character. Rimas answered: “You are used in courageous, strong roles, but, in my opinion, you have touchingness, tenderness, attentiveness, and I want to use these colors.” I was incredibly pleased. I love playing Shmule, I love our performance. When we were in Israel, the play was watched by the author of the novels on which it is based, Grigory Kanovich. He said that I was playing his uncle. It was flattering for me to hear such a compliment because authors rarely accept other people’s interpretations.

ELKIN: What, to you, is interesting about your character? Who is he, your Shmule-Sender?

GUSKOV: My hero is a lonely man. In old age, all people are lonely, even if they are surrounded by the warmth of loved ones. This is the objectivity of life that my hero formulates.

He says bitter words: “Wherever we go, we are always heading to our children, and they are heading in the opposite direction, and we can never meet them.”

Shmule leaves his home in search of a mythical place. His son Berl lives in America. Probably a successful businessman, but where is Lithuania, and where is America? Shmule speaks constantly about how he loves Berl and his grandchildren, how Berl sent him a gold watch, which I subsequently had traded for a pair of boots…

These thoughts coincide with my reflections on life. I have no Jewish blood in me, but still, this life philosophy is close to me. The Torah tells us that the universe is concentrated in each person. Every person is a world.

ELKIN: A quarter of a century ago, Rimas Tuminas staged Smile in the Maly Theatre of Vilnius. It turned out it was his first, but not his latest version…

GUSKOV: When we arrived on tour in Vilnius, three performers of the first production came out during the intermission. This was special cooperation between the Vakhtangov Theatre and the Maly Theatre of Vilnius. The continuity of generations was observed, we took the baton from them. Everything went very beautifully. This suggests that although the common geopolitical space is destroyed, the single cultural space remains. In our theatre space, we worship Lithuanian actors, and they us.

ELKIN: Many people say that the purity of the original art form of theatre is lost when filmed. Do you think so too?

GUSKOV: It all depends on the shooting. These days there is a culture of recording and showing performances on the big screen. Once in Voronezh, I was able to see the play Frankenstein from the London National Theatre with Benedict Cumberbatch. Amazing staging! I watched with my mouth open. Here’s an example where the atmosphere of a live presence is transmitted to the cinema beautifully. It is possible!

ELKIN: You play three main roles in three performances of Tuminas. In addition to Shmule, you perform in Eugene Onegin and as Miller in Fake Coin—the recent premiere of the theatre. What distinguishes Tuminas’ directorial style?

GUSKOV: Few theatre directors can really own a big stage. Tuminas—can! He always works as a team, with his, as I call them, “accomplices”: set designer Adomas Jacevskis and composer Faustas Latenas. Costume artists may vary, but these two people remain the same. Therefore, the performances of Tuminas always have their specific style. He never imposes himself on the public, never flirts with them. The beginning of his performances is always very calm, figurative. This is done so that the viewer can enter a different coordinate system, away from the street and their worries. There is nothing superfluous on the stage, everything has its intended purpose. The actors in concert with Tuminas exist together and at the same time autonomously. Everyone has their own theme, and the director precisely develops these themes. Actors are free, confident, stand firmly on their feet. All these components make Tuminas a great director. 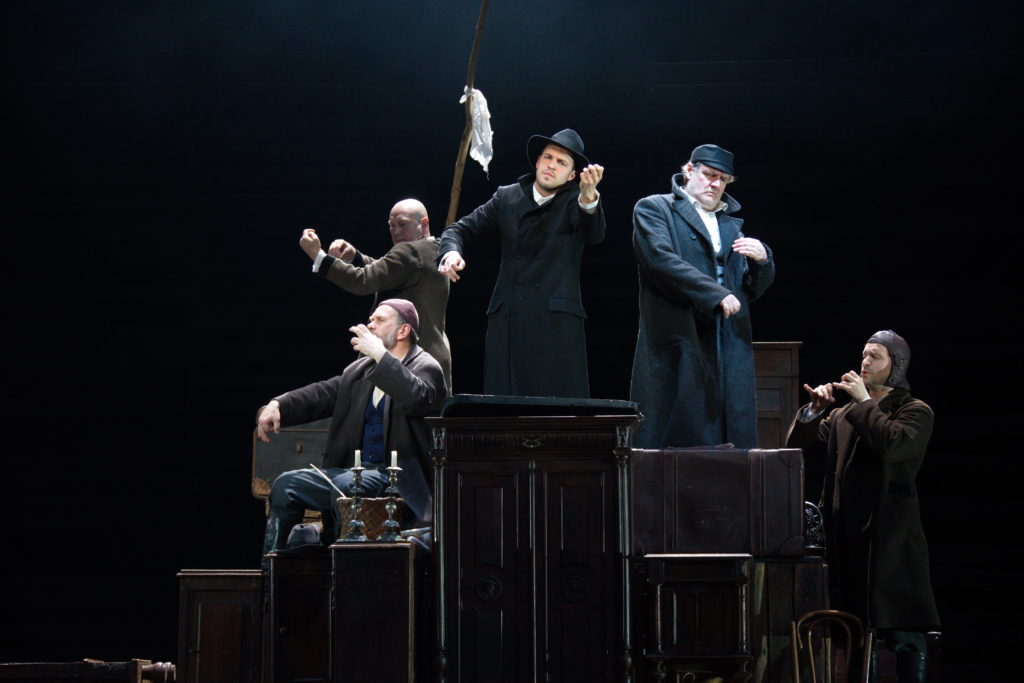 Scene from the play Smile Upon Us, Lord. Photo courtesy of Stage Russia HD

ELKIN: Everyone is accustomed to classify actors stereotypically: a comedian, a tragedian, a characteristic actor…Looking at you, it seems to me that you are an actor without a stereotype. You are ready to play both lyrical heroes and bastards…

GUSKOV: I’m a subject actor. After graduating from the Institute, I did not dream of playing any particular character. Neither Lear, nor Hamlet, nor Astrov. I always wanted to participate in those performances in which the hero experiences the same “burden of human passions” that I experience. If there is a topic that corresponds to my ideas about life, everything instantly responds to me and I undertake it, without looking back.

ELKIN: Your life in the Vakhtangov Theatre began in 2011, when you played Antipa Zykov in Vladimir Ivanov’s play People Like People, based on Gorky’s play Zykovs. In 2012, you played the same Ivanov in the role of David in the play The Ordinary Case based on the play by Ray Kuni. Why did you not immediately enter the Vakhtangov theatre troupe?

GUSKOV: After Zykovs I had a conversation with the theatre’s managing director, Kirill Krok, and Tuminas, and they asked me to join the troupe. I said that I have great respect for the theatre, but I see no point in simply becoming a member of a troupe. There is no reason. Then came the idea of the play Smile Upon Us, Lord and an offer that was impossible to refuse. From this performance, my full life began in the Vakhtangov Theatre.

ELKIN: I know the Vakhtangov actors well enough. All of them are absolutely concentrated on the theatre and their theatrical works. With you, I think, it is not so. You shoot a lot of movies, produce. What place in your life do you devote to theatre?

GUSKOV: Theatre is still first in my heart. I primarily perform the duties as an artist of the Vakhtangov Theatre. When we launch a new play, I disappear from everyone. When we began rehearsals for Fake Note on the morning of August 20, I devoted myself entirely to it. No calls, no meetings—from morning to evening I was in the theatre, until the premiere on September 15. I appreciate the bright period of theatrical existence in my life. I don’t know how long it will last, but I don’t want it to end. 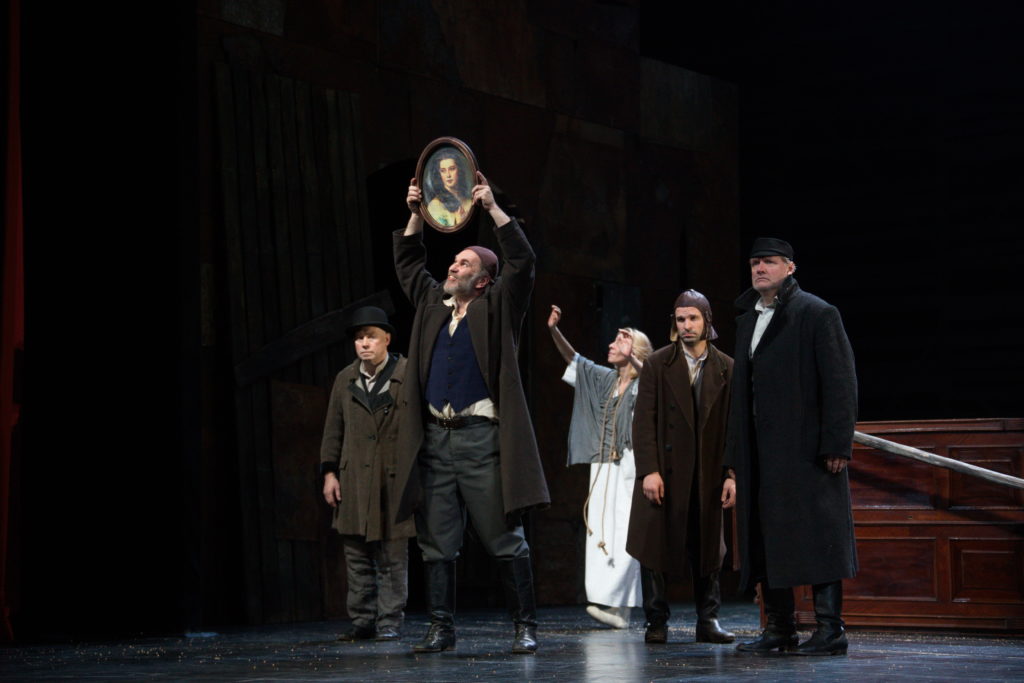 Scene from the play Smile Upon Us, Lord. Photo courtesy of Stage Russia HD

ELKIN: Do you have any plans for the next season?

GUSKOV: Not yet. Our artistic director announced his intention to tackle War And Peace. As always, in such large works, the role must find an actor. Rimas will conduct readings. Will I be chosen? I don’t know. Our theatre’s most recent premiere was a performance of the Italian director Luca de Fusco based on the play Saturday, Sunday, Monday by Eduardo de Filipo with Irina Petrovna Kupchenko and Yevgeny Knyazev.

ELKIN: Last year, the film The Eternal Life Of Alexander Khristoforov was released on Russian screens. You wrote on social media that, “This is one of the most personal films of my entire acting and production career.” Please tell us about the film and your role.

GUSKOV: The film is a comedic meditation on life, a philosophical comedy, a parable comedy with a very simple message: in life, the most important thing is to love and be loved! It means to be in demand, to be necessary. This is a story about how a person who knows no doubt is transformed into a person who must say: “I forgive you.” He begins with the words “I forgive you, goat,” and then he nevertheless appropriates this phrase, and life gives him quite unusual gifts. It’s a light story, starting with laughter and self-irony, and ending with bright tears and the desire to live. I like how the film turned out.

ELKIN: Another recent work is the play Onegin-Blues with Igor Butman’s jazz version of Pushkin’s classic. How did this performance come about?

GUSKOV: Igor and I go way back. About six years ago, at a party, I reminded him how he and Kazakov were doing a performance based on Brodsky. Kazakov read poems, Butman played musical compositions. I told him that Onegin is his saxophone. Word by word, like notes, one thinks, searches. As a result, a performance with a violin quartet, an ensemble orchestrated by Igor, and a tenor from the Helikon-Opera was formed. This is a kind of fantasy that audiences seem to really enjoy. The trouble is coordinating Igor’s and my schedules. I sympathize with the producer Lena Roberman, who invested in this project, but the play exists and I love it.

ELKIN: The performance of Butman and Kazakov’s Duet For Voice And Saxophone toured in New York and Chicago. Maybe we will see Onegin-Blues?

GUSKOV: I would really like that. With Tuminas’ Onegin we played four sold-out performances in New York and Boston. And I was in Chicago at the beginning of 2008 with the film Father. I remember Lake Michigan and the jazz club that Al Capone loved. I also have a student from Chicago. He starred in the TV series Interns. So something binds me with Chicago.

Aleksei Guskov stars with Viktor Sukhorukov, Vladimir Simonov, and Yulia Rutberg in Stage Russia’s Smile Upon Us, Lord in cinemas across the US and UK. For more information on the production, participating venues, and access to online ticketing, see https://www.stagerussia.com/smile-upon-us-lord.

This interview first appeared in Russian in the Russian American online magazine Reklama. It is reprinted in translation with permission. 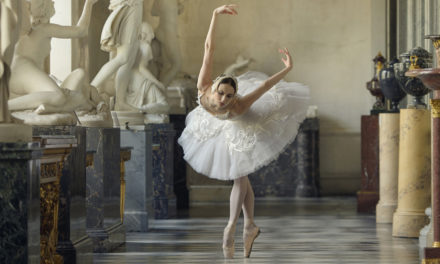 Backstage Stories From The Mariinsky Theater Told By A Photographer 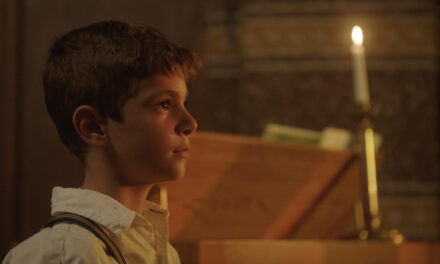