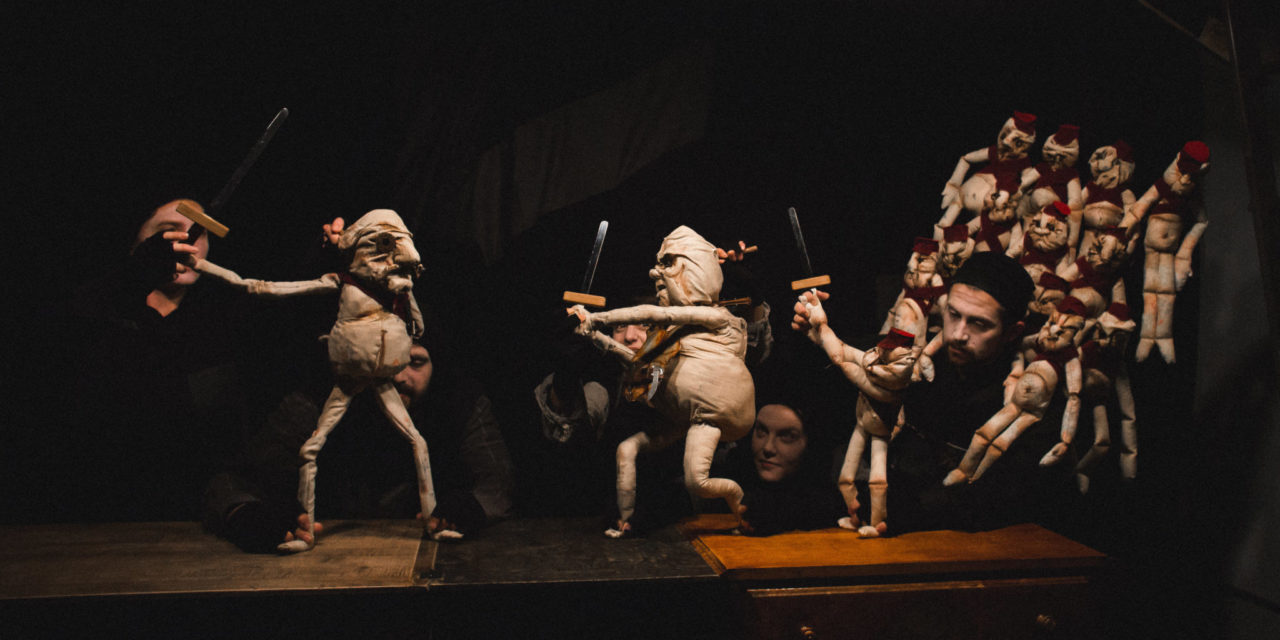 This journey starts by skipping back to the Fall of 2016 at the kitsch-laden Chopin Theatre in the trendy part of near-west Chicago.  You walk through the gilt lobby, down a tight stairwell, and through the cozy clutter of the downstairs space.  A door is open in the wall, that leads to a rough, subterranean black box where a make-shift stage is defined by ladders, boards, and a tangle of lighting instruments.  Once the audience settles in, The Rough House Theater production of Ubu the King begins with a vaguely military tune played on a chorus of kazoos. The puppeteers, in ghoulish peasant garb designed by costumer Maddy Low, scurry about the stage setting up for the production.  They look strangely doll-like in their muddled white and black makeup, punctuated by reddish lips and ruddy cheeks.  They push together worn kitchen carts, stack rough-hewn crates, and unfold hinged counter tops to form a puppet stage.  Finally, the scene is set, and the first group of puppets are pulled from the drawers of the cart and brought to life.  They are made in the Bunraku style, held and manipulated by the company members who seem to fade from view as they meticulously direct their attention (and the audience’s) onto the puppet players. 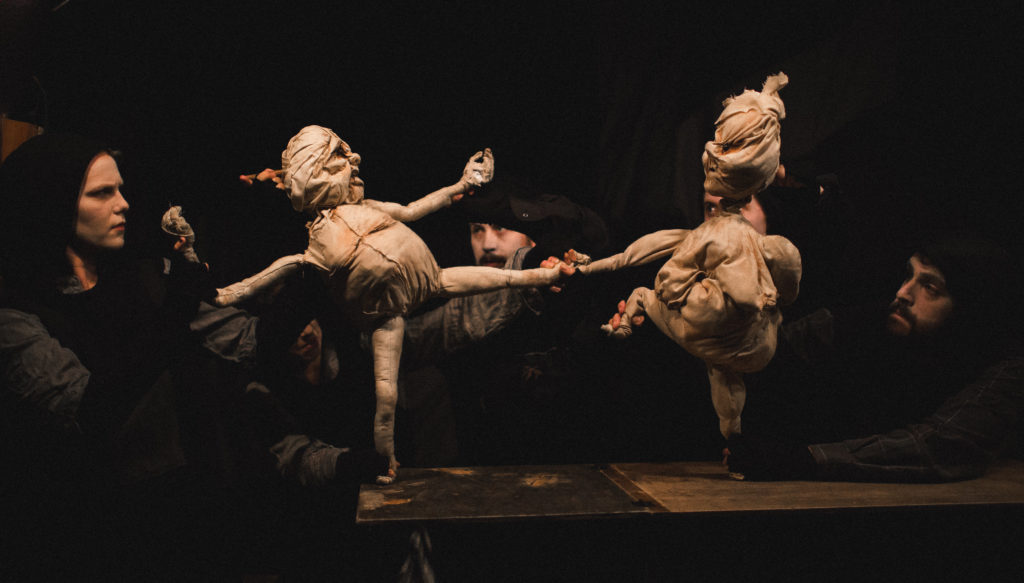 The script is an adaptation of Alfred Jarry’s famous Ubu Roi, in which a flatulent, fat, and greedy man decides to conquer Poland.  He begins by convincing a confidant to murder the king on his behalf, and proceeds to terrorize both the court and citizenry with unfair taxes and unsuccessful military campaigns against Russia.  Along the way, Ubu gleefully sacrifices soldiers and commoners without regard.  The play follows his journey from noble to a ruling despot and ends with his deposition at the hands of the king’s son and heir. The cartoonish bad behavior of Pa Ubu, and his shrewish and equally ambitious wife Ma Ubu, allow the audience to laugh at his perpetual excess and his inevitable downfall.

This puppet production enters a long line of “non-human” stagings of the satire.  Jarry is said to have staged a version of his original Ubu Roi with marionettes.  A modern version by the French company Nada Théâtre engaged with object manipulation to allow vegetables to play the soldiers and peasants.  A human Pa Ubu literally devoured his victims.  In a more serious adaptation, South African company Handspring presented their Ubu and the Truth Commission as the country labored to process the horrors of apartheid.  This particular production stepped into the campaign fray.  Reviews were quick to point out parallels to presidential candidate Donald Trump, with his public outbursts and short political resume. 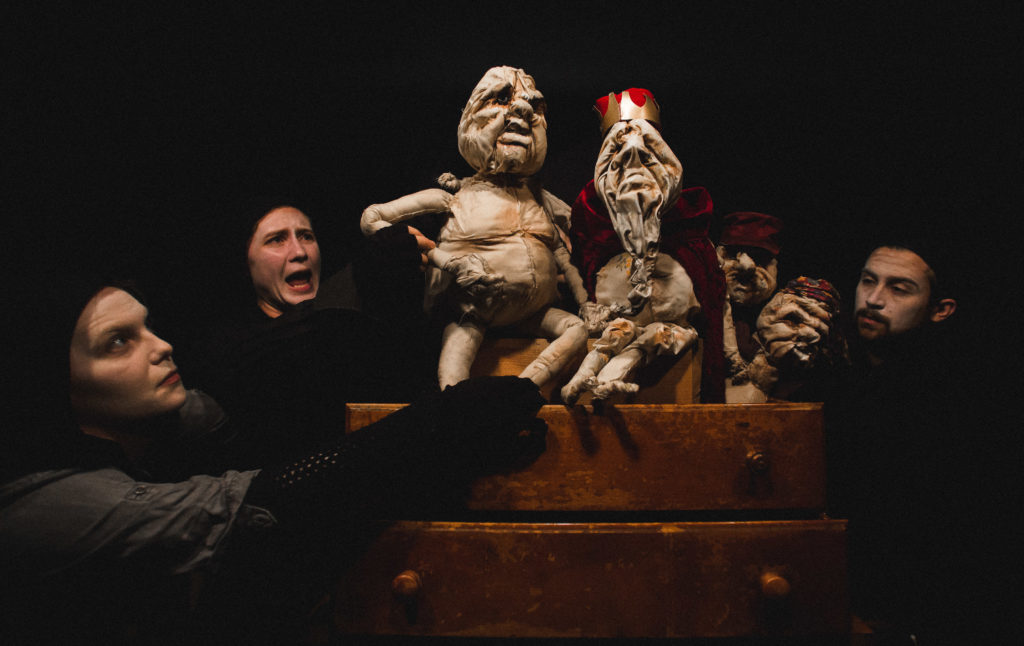 The Rough House Ubu the King benefits from puppetry as a form by rendering the carnage gleeful.  Marching into battle, puppets linked at the shoulder with jointed legs dance across the stage like ill-trained militia marching out of step.  As they are killed, they flung into the audience with abandon. Accountants to the king who report unsatisfactory results are fed into a Rube Goldberg style “killing machine” made of ventilation hoses that shiver and shake before spewing parts onto the floor and front rows.  The physical silliness pairs well with the lyrical nonsense of the dialogue. The players- David Gordezky, Charlotte Long, Claire Saxe, Sarah Stockdale, and Nick Strauss- move from character to character, which results in some very amusingly affected falsettos and baritones as well.

Puppet maker Grace Needlman, and builder Kathryn Shivak, are clearly working with repurposed materials.  Examined up close the puppets are stuffed dolls with minimal interior structure.  They are primarily made of old sheets and bits of hardware, highlighted and lowlighted with paint to give them visual depth.  Will Rudolph’s puzzle of a set and improvised lights give the playing space a similar “found object” feel, and highlight the puppet players well.  Stuffed bodies with tufted button eyes are amazingly expressive onstage under the lights. The skinny legs and grotesque, bulging bellies and breasts exaggerate every motion to comic effect. 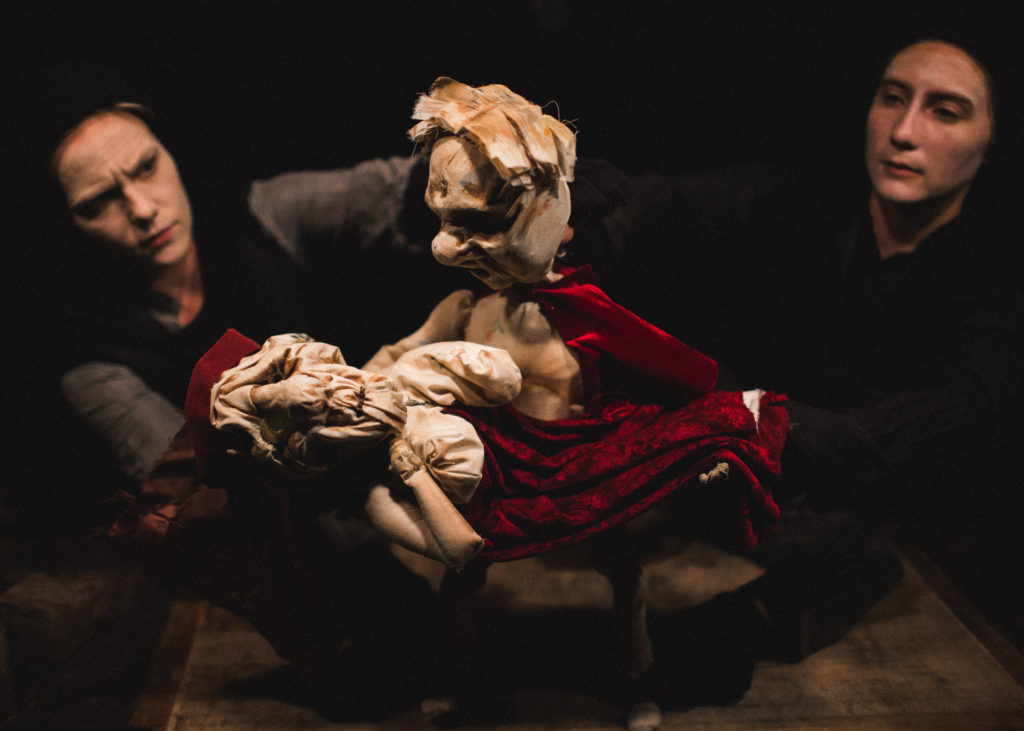 Another particularly clever turn in the staging is how Pa Ubu seems to change hands. In the lull between scenes, he moves from one company member to the next.  Each time, the tiny tyrant asserts himself.  He beckons to each new handler to lean in close and whispers into their ear.  You watch them nod, and smile, muttering a few words of agreement.  Perhaps they have also been offered a piece of the pie should Ubu’s campaign be successful.  Everyone in this world has a little of the tyrant in them, waiting to be awakened.

This account is based on the original run at the Chopin Theatre in the Fall of 2016.  Fortunately, if post-election you still find yourself in need of a little governmental comic relief, you are in luck- the production will be revived as part of the Chicago International Puppet Theatre Festival on January 26th, 27th, and 28th at Links Hall.

The full dates for the 2017 Chicago International Puppet Festival range from January 19th – 29th at venues throughout the city.  This is the third year for the festival, which traces its origins through three previous festivals: The Chicago International Theatre Festival that occurred annually from 1986-1994, a four-day puppetry festival hosted by The School of the Art Institute of Chicago in 2000, and Puppetropolis in 2001.  According to their website, the Chicago International Puppet Festival aims to “cultivate the imagination through the traditions and contemporary practices of the art of puppetry” and “establish Chicago as a cultural center for puppetry” by making local and international work visible and accessible, and creating continuing education opportunities for artists. 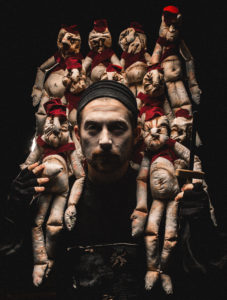 This year’s festival showcases work in an impressive range of styles.  For instance, while local company Manual Cinema uses overhead projectors to create modern children’s theatre in Magic City, I Gusti Ngurah Kertayuda & the Mandala Ensemble use traditional wayang kulit shadow puppets to tell the tale of a supernatural shape-shifting battle in Conversations with Devi.  The finely-rendered newspaper marionettes in El Silencio del Carbón, by Chilean company Silencio Blanco, transcend the language barrier by working without words to present a cautionary tale about modern economics.  Elsewhere, the joyous creations of the local troupe Jabberwocky Marionettes chart a friendly frog’s journey into outer space.  While Geumhyng Jeong of South Korea explores the relationship between body and object in meditative choreography, Italian company Teatro Dei Piedi presents a comic contortion-puppetry hybrid focused on their feet (as the name suggests).  To capture the greatest range in the least time, you could attend the festival’s cabaret performances- Nasty, Brutish and Short and Immaculate, Poignant and Medium Length.  Each variety performance is slated to include two primary festival acts as well as local contributors.

To find out more, visit: http://www.chicagopuppetfest.org/