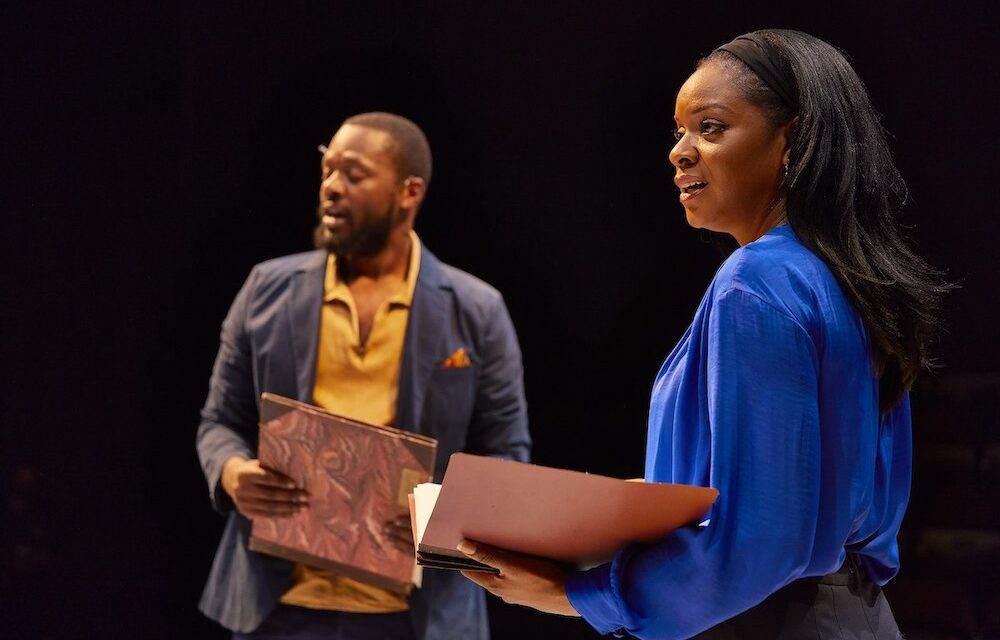 For more than three decades, playwright Winsome Pinnock has been at the forefront of new writing, often experimenting with form as well as documenting the lives of Black Britons. Her new play does both. Its original opening in March last year at the Royal Exchange Theatre in Manchester was halted due to you know what, so it was then broadcast as part of the BBC’s Lockdown Theatre Festival on Radio 3, and it now arrives at the National Theatre, having already won the 2018 Alfred Fagon Award. As its densely written story moves between London in the present and in 1840, multiple perspectives on the Black British experience rise up like an inevitable tide.

Pinnock’s theme is an exploration of how Black history, and Black lives, are represented, or rather misrepresented, in various art forms. In the present day, young actor Lou — the lead in a successful American sci-fi series in which she plays the Captain of a star ship — is cast in the role of a slave in a film about Victorian artist JMW Turner, only to find that her backstory has been cut, and a nude scene inserted. She is not happy about these changes, in which the film’s Black creatives have colluded. Meanwhile, in May 1840, Turner exhibits several works at the Royal Academy, including The Slave Ship, which references an atrocious mass murder, and Rockets and Blue Lights, about a different kind of danger.

Meanwhile, also in the 1840s, Londoners Lucy and Thomas, who are freed slaves, and their daughter Jess, struggle to overcome their memories of chains and whips. When Thomas finds that he cannot resist the call of the sea, and signs on for what he hopes is a final voyage, Lucy is appalled to discover that he will sail on what had, before abolition, been a slaver. And while in the present day Lou discusses her film role with Trevor the director and fellow actor Reuben, protesting against the fact that Roy, who plays Turner, has become the center of the story, she also meets Essie, an art teacher, and her youthful pupil Billie. Both of whom have different views about art and history.

Yes, it’s pretty complicated. Pinnock writes with enormous feeling, using dreams, visions and hallucinations to break down the distances imposed by time in order to show how the agonies of slavery haunt the minds and bodies of Black Britons. Trauma collapses time. The past hurts the present. At its best, this kind of subjective and poetic image creation is both audacious and striking. At its worst, it is over-complex, confusing and overly didactic. For the most part, I respected the gesture more than I admired the art, and while I cannot argue with the integrity of her vision, I can protest that she has crammed too much into too little space.

The dizzying changes of scene, from a grandfather’s deathbed to a Victorian slave ship, are all portrayed with powerful metaphors about the sea and water, using images of drowning, ghost ships, blood red sunsets and, by contrast, the freedom embodied in dance and song. In this production, the violence of oppression and exploitation is portrayed in an abstract way, although this is harrowing enough. Pinnock stresses the role of art as bearing witness to past wrongs, but also warns against indulgence in “torture porn” — it all depends on who is in control of the narrative. At the centre is the enigmatic figure of Turner. Does his painting The Slave Ship refer to the infamous Zong massacre, or is it a more general indictment of the inhumanity of slavery? Either way, as Lou says, “Why does he have to make something so ugly beautiful?”

Pinnock also shows how the depiction of Black women in today’s culture can be affected not only by patriarchy, but by white patriarchy. Race runs through the play like a binding thread. Lou’s role in the film, which is suggestively called The Ghost Ship, is changed from one in which her character had agency and depth to one in which she is just a superficial image, or object, of male desire. The terrible history of slavery is turned into a narrative of white abolitionists, and white saviours, and the Blacks are once again relegated to bit parts. Deprived of their will. It’s a familiar story, but still enough to make you both sad and angry. This production was inspired, I’m told, by a James Baldwin quote: “Not everything that is faced can be changed, but nothing can be changed if it isn’t faced.” Amen to that.

Miranda Cromwell’s staging employs most of the cast of her original Royal Exchange production, on designer Laura Hopkins’s wooden boards — which work equally well as the planks of ship, various interiors and a jetty — and despite some messy moments and awkwardly balletic scene changes the themes of the play come across quite well. The quality of Pinnock’s writing, its enquiring nature and its attuned openness to the connections between past and present, to the complexities of racial humiliation and oppression, is a constant reminder of the sensitive intelligence of her imagination. And Cromwell’s cast is very good.

Kiza Deen’s Lou conveys the coolness of a successful career as well the anger of a creative person who is forced to compromise, and gets the chance both to play her Captain persona and more intimate family moments. Most of the actors play two parts, which allows for more shades of meaning to emerge. Karl Collins and Rochelle Rose are good as Thomas and Lucy, and as Trevor and Essie, while Paul Bradley’s Roy and Turner get a few neatly Shakespearean moments. The rest  — Anthony Aje (Billie), Matthew Seadon-Young, Kudzai Sitima (Jess), Cathy Tyson, Everal A Walsh and Luke Wilson (Reuben) — are good in support. For me the main thing missing was a sense of a real and conclusive drama.

This article was originally published by Aleks Sierz on September 2, 2021, and has been reposted with permission. To read the original article, click here.