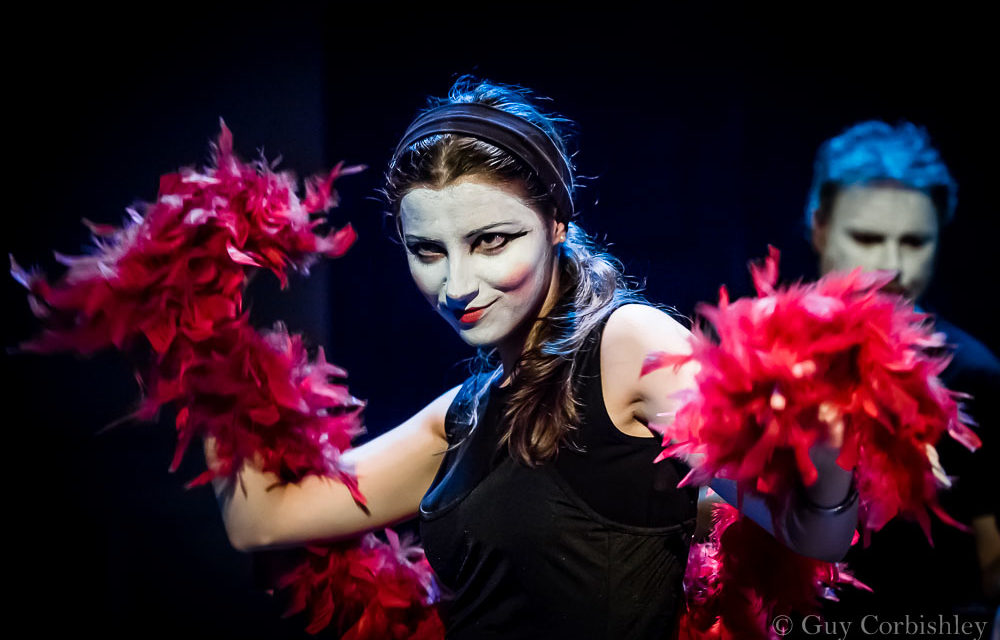 In Warwickshire a year ago, a fish-farmer was reported in the newspapers as putting a sign up by the side of his lake: “No Eastern Europeans.” Attacks on Polish immigrants, the Guardian tells us today, have risen tenfold since 2004, and in May Nigel Farage felt at liberty, in an interview, to say that he would feel uneasy if a Romanian family moved into his street.

This is the context in which writer Uilleam Blacker and Molodyi Teatr, a Ukrainian group, have produced Bloody East Europeans, a kind of cultural sketch-show exploring the condition of being an East European in the UK. Though it clearly has its heart in the right place, and one applauds the enterprise – there are bound to be more works on this topic – the show finally doesn’t seem to go far enough, and still feels vaguely like a work-in-progress.

It begins with a faceless gang of workers wearing paper-bags on their heads, a symbol of dehumanization. They remove them to reveal the actors underneath, and the cabaret begins, an hour that will take in visa problems, legal marriages, UK border guards, the problems of national stereotypes and dismay at British food. The performers often act individually with talent and brio, but as an ensemble Molodyi Teatr (Young Theatre) has some way to go – there is a fair amount of milling about on stage when one feels that stillness is required, and the pace of the performance seems uneven, with the occasional actor breaking the rhythm, or some of the performances – the male actors especially  – feeling understated when something bigger and more confident seems called for. As for the show itself, it is a mixed bag – points about our prejudices against Eastern Europe, the place where one is greeted with “bread, salt, balalaika and prostitutes,” and problems such as visa-nightmares and human trafficking are areas ripe for coverage, but here they are skimmed over lightly, and don’t seem to add to what we already know. By contrast, some judicious trimming of dialogue would seem right for a lengthy exchange between an inspector and a woman working as a “community volunteer” (ahem) in the second half, and one of the show’s closing speeches, in which the Eastern Europeans’ plight in modern Britain is, it’s implied,  comparable with a Jew’s in renaissance Europe seemed a jarring over-statement of the case: unless there are pogroms being planned or carried out in the UK, the parallel seems heavy-handed, and to strike a false note.

However, there are also moments that are fresh, surprising, and incisive, and Blacker writes with wit  – points are made about the differences, even antipathies between nations usually lumped together under the banner “Eastern European,” suggesting that the label itself is ignorant and stupidly reductive. Much is made of the word “Welcome,” hinting at the contrast between the welcome generally extended to visitors in Eastern Europe – the continent’s more hospitable half – and the reception currently being afforded to them over here. There are some good jokes about smoking indoors, about a man’s marriage of convenience in this country the better to afford a real one to his sweetheart back home, and UK state-testing of immigrants on Shakespeare so that “one can become a toilet cleaner… forever.” A poignant scene shows an émigré mother so deprived of anything but Skype contact with her daughter that the child is beginning to assume her granny is her mother. All these things seem strong but the snapshot nature of the show never allows them to go far enough – frustratingly, as here one seems about to discover something profound and new about the experience of Eastern Europeans in Britain that appeared to go beyond tabloid headlines or Newsnight reports and to illuminate rather than confirm.

But about the company’s energy and joie de vivre, there can be no question, and the amount of Ukrainians laughing in the audience suggested that many points about émigré life in Britain were being slyly nailed. It’s almost two months till the Edinburgh festival, presumably where the show is headed, and two months is an eternity in the rehearsal room. There is a real case, I would suggest, for writer Uilleam Blacker giving his actors freedom without borders to improvise and experiment and see what other unexpected truths the company can unearth before then – for in the show’s stronger moments those Bloody East Europeans clearly score some palpable hits.

This article originally appeared in Central and Eastern European London Review on June 11th, 2014 and has been reposted with permission.