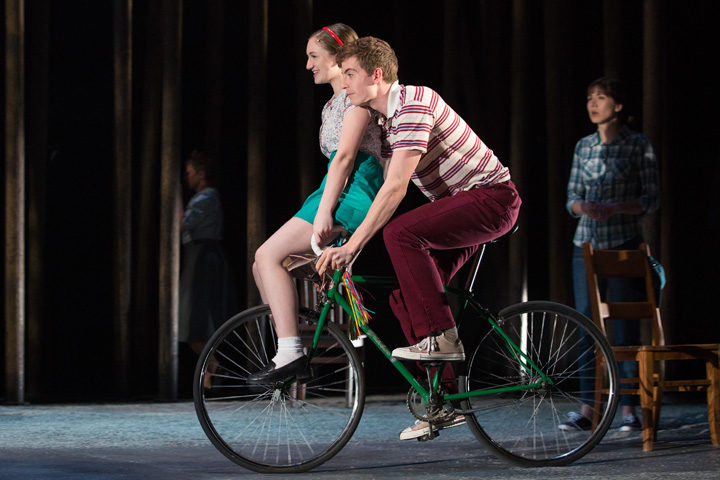 On a very warm evening June 9, 1959, in Clinton, Ontario, fourteen-year-old Steven Truscott gave twelve-year-old classmate, Lynne Harper, a lift on his bicycle. Miss Harper was found dead two days later, raped and strangled with her own blouse. Mr. Truscott was the last person to see her alive, charged with her murder, and sentenced to be hanged which was later overturned to life imprisonment. The play recounts the horrific aftermath of events in this small town that captured media attention and changed Canadian law thanks to Isabel LeBourdais’ 1966 book that was critical of the judicial system and the police.  Playwright Beverley Cooper uses the fictitious character, Sarah, another classmate of Steven and Lynne’s, to let the audience see the events of the story from her point of view.

Camellia Koo’s stark set design is visually pleasing from the chairs placed across the stage, some haphazardly, to the bicycle located stage left. For some reason, seeing the trees placed across upstage reminded me of Robert Frost’s “The woods are lovely, dark and deep.” As the story progresses, this metaphoric line seemed quite appropriate. While these trees create a nice picture at the top of the show, they also provide places of darkness and despair especially those visually effective moments in Steven’s jail cell. Many of the actors appear and disappear through these trees. Lighting design and changes transition fluidly thanks to designer Bonnie Beecher.

Jackie Maxwell’s direction is sharply attuned in this extraordinarily outstanding ensemble piece. The nicely rehearsed choral work was flawlessly executed as each consonant-enunciated sound was clear. Overlapping voices from the past provided suspenseful tension as I wanted to hear as much as possible what the townspeople had felt and endured during this time. I was riveted with much anticipation on each word spoken during both acts and was surprised when intermission rolled around. Under the guidance of Ms. Maxwell, this remarkable company treats this controversial subject material of guilt, innocence, and responsibility with compassion, humanity, and dignity.

And what standout performances to boot. As Sarah, the play’s impressionable narrator, Courtney Ch’ng Lancaster is believably terrific. Ms. Lancaster delivers a confident and self-assured performance in trying to understand the horrific events that have unfolded before Sarah. To become privy to the anguish Sarah and each of these characters felt, due to this crime, made me uncomfortable as it should but it also allowed me, as an audience member, to piece together for myself what had possibly occurred that horrible night.

Dan Mousseau as Steven and Berkley Silverman as Lynne are heartbreakingly convincing as the two central characters. Caroline Gillis and John Cleland as Doris and Dan Truscott are despondent and anguished over their son’s fate, while Ms. Gillis reveals a hopeful moment when she speaks to Steven in the second act. Deborah Drakeford as Sarah’s mother powerfully reveals her insecurities in wanting to shield Sarah from what happened that fateful night.

In each of the characters they played, John Jarvis, Christef D’Esir, and Akosua Amo-Adem masterfully underscore the conflicting opinions, deep wounds, and argued facts about what occurred that June 1959 night and the results following. Their various characterizations and vocal qualities created appealing characters and individuals about whom I wanted to learn more of their life-changing circumstances.

Personally, Nancy Palk’s performance becomes the touchstone of the theme of guilt and responsibility. The juxtaposition of two out of three characters she plays encapsulates why the trial was grossly mishandled and how it ought to have been handled.  As the sentencing judge, Ms. Palk is cold, matter of fact, and pronounces sentence without any moral decency. She blessedly balances this bluntness in her contrasting role as Canadian author, Isabel LeBourdais, a direct, headstrong, blunt, and yet compassionate journalist determined to do two things no matter the cost: a) to mourn the loss of young Lynn Harper who didn’t deserve what happened to her and b) to right the atrocities Steven Truscott endured and to get his trial reviewed.

Spoiler Alert: There is one slight (and it’s only minute at that) quibble and that is in the abrupt denouement of the play’s conclusion. Since there were some dynamic monologues by Sarah and others, I was hoping perhaps Mr. Mousseau might have stepped forward as Steven to reveal something to us near the end. Again, just a tiny observation, that’s all.

Innocence Lost: A Play About Steven Truscott is a story that must be seen by Canadians for it cannot simply be “relegated to the comfortable rear-view mirror of history” as so aptly stated in the Playbill. Instead, each of us must remember, whenever we confront a flawed judicial issue reported in the news, that our Canadian justice system is flawed since it is teamed by humans who are capable of human error. As informed citizens, we must always remember that we can never become passive and remain actively vigilant to ensure tragedies like Steven and Lynne Harper’s story never occur again.  This superior Soulpepper production is a testament to this fact.

Innocence Lost: A Play About Steven Truscott continues to June 23 in the Marilyn and Charles Baillie Theatre in the Young Centre for the Performing Arts, 50 Tank House Lane, in Toronto’s Historic Distillery District.  Visit www.soulpepper.ca for further information. To purchase tickets visit the website or call the Box Office at (416) 866-8666. You may also visit @soulpepper or Facebook: Soulpepper Theatre.

This article originally appeared in Onstage Blog on May 26, 2018, and has been reposted with permission.