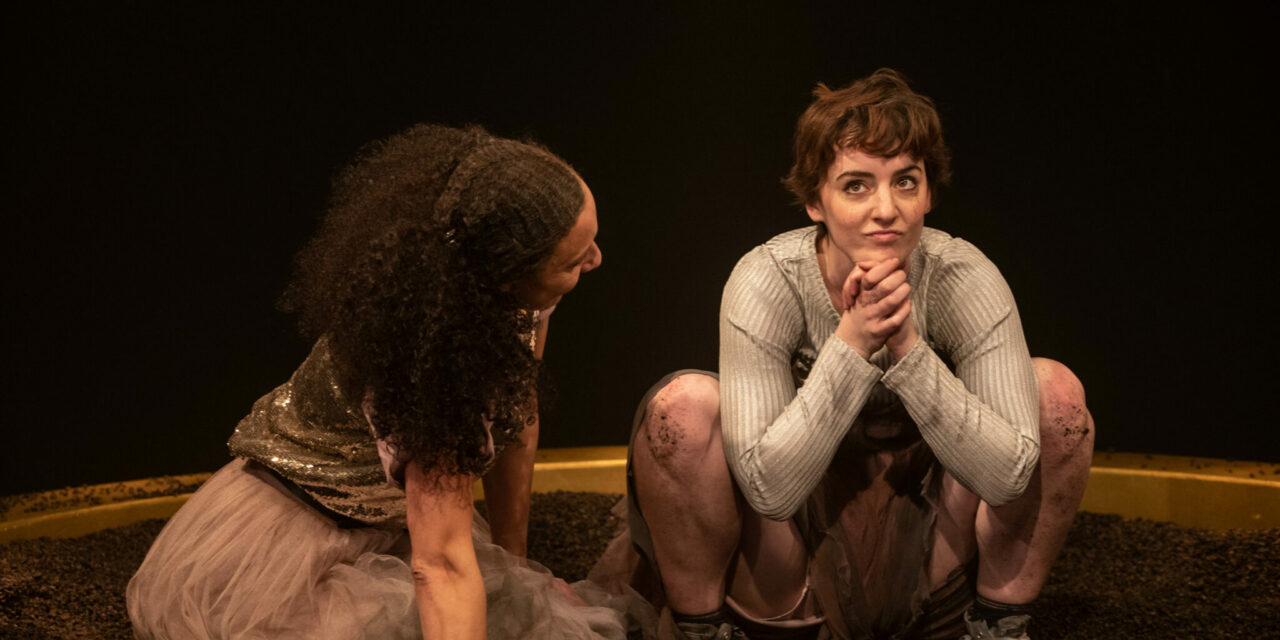 "Antigone" at the New Diorama Theatre, 2020. Photo by Dee McCourt.

In her contemporary re-working of Sophocles’ tragedy, Lulu Raczka has chosen to forego the classical elements of tragedy altogether. No Kreon, no sense of hubris, and no punishment by the Gods. We are as far removed from Sophocles’ worldview as possible. And this does not have to be a bad thing. The performance takes place in a sandbox-like circular pit and consists almost entirely of an extended dialogue between Antigone and her sister Ismene. This is a secularized, demythologized, fleabag-ified, Antigone. And it is on these terms that we must try to make sense of it.

My immediate impression after seeing the play, opening at the New Diorama Theatre this week, was that it seemed oddly out of sync with its own goals. Rather than being ‘irreverent’, it appeared to reduce the play to its opening scene (an encounter with Ismene) and rendered her more rather than less opaque. But upon further reflection, I believe there is more to it than just the elimination of elements. Something is gained too. The ethical battle takes place between the sisters, and thus the struggle is internalized. This too is a tragic predicament and one that brings out the particularly devastating impossibility of Antigone’s dual roles of daughter and sister.

We begin with the childish expectations of life beyond the palace walls. Antigone and Ismene dance together, in the exaggerated childlike fashion of an adolescent imitating sexualized displays on television. The aspect of physical transgression remains a feature throughout. Antigone will cross over from immaterial fantasy to the reality of physical action. Ismene grants herself the security of inaction while having to bear the lack of consequences. Actions have consequences. But fantasies are punished too.

We witness Antigone breaking into what will be her own tomb. With a great heave, she lifts the lid of a trapdoor and upends the sandbox in which she and Ismene had been previously roiling. Antigone is the opposite of a grave robber. She is not there to remove a body but intends to inter her brother back to where she knows he belongs, in the family crypt. His mangled corpse, twice defiled, both by humans and animals, has been left out to rot. Upon threat of death, no-one is to move the body. In so doing, Antigone buries not only her brother but herself.

Antigone’s protest is a challenge to the living. In so doing, she affirms her own life inasmuch as she forfeits it. This has always been a tragedy of mutual impossibilities and irresolvable paradoxes. Even if she apologizes for her crime, that would be worse than not having committed it at all. Antigone is a true revolutionary, not because of her willful act, but because she is willing to see it through to its logical endpoint. If that means her life is forfeit, then so be it.

The beauty, and the tension, doesn’t lie in the certainty, but in her uncertainty. And this is where the decision to stage the entire play as an extended dialogue between Antigone and Ismene makes sense. These young women are two sides of the same coin: On one side, loyalty towards the entrapments of family duty, and on the other, loyalty towards the eternal laws of the Gods. The play’s original theme is maintained, but transformed. The cast of characters is different, but the tension between particular and universal duties remains.

So what is left, without the dramaturgical rules of tragedy? At its best, the reworked play works as a meditation on the relationship between fantasy, intent, and act. At worst, it is a camp exchange between two pubescent girls.  The interesting thing is that these two aspects are necessary to each other. After all, it is the relationship between the ‘play’ of unfulfilled intent, and the maturity of consequences that marks the transformation from child to adult.

Here, the play suggests an interesting inversion. It is the adolescent who can be truthful about her own desires (“I want to be fucked hard”) whereas the adult has learnt to understand the limits of acceptable behavior. But is Antigone really true to her own desires? The answer is surely no. While she feigns a rebellious attitude (“Fuck Kreon!”) she is also the secret conservative, willing to assume the weight of her unpopular decision. The paradox of her act is that it is both transgression and conservation. To act against Kreon is also to try to preserve him from the wrath of the Gods. In this version, the Gods are entirely absent, but Antigone’s reluctant love for her uncle bleeds through. She is more like him than she would like to admit.

While I sorely missed the presence of Kreon, in this scene his absence achieved psychological realism. Ali Pidsley’s direction is one that allows for the full demonstration of Annabel Baldwin’s impressive range of emotive skills. The Kreon she is fighting is also the Kreon of her imagination; the one she so desperately wishes to love and preserve from his own folly. One of the toughest challenges in acting is to rage against a foe we have not seen. Kreon’s image is painted through sheer invocation. That is, his authority looms larger than his person. This works surprisingly well. But the decision to exclude Antigone’s direct encounters with Kreon remains a Faustian pact. What we gain in dramatic tension, we lose in the absence of the play’s competing ethics.

Then again, Antigone’s act is not a crime of passion but of the mind. In this version of the play, the ‘intent’ to act looms larger than the act itself. The cruel irony is that her ‘crime’ is that which upholds a sacred law. Hers is a classically female position; which is to say, she is tasked with sacrificing herself in the name of tradition. But Antigone refuses to die ‘for’ anyone. And so for a brief and heartbreaking moment, we see her go through the agony of indecision. Can she actually apologize to Kreon? Will he spare her? But then, with desperate determination writ large on her face, Antigone realizes that what has been set in motion can no longer be undone. She has played her part, and in willful defiance of her own instinct for survival, asserts her position within the universal order.

Ismene, for her part, fulfills another symbolic duty. She has to keep on living without Antigone and fulfill her responsibilities as a mother and member of a broken family. In order to illustrate this, and to give Ismene her due arc, this version of the play ends with an extended monologue. It’s one of those tricky decisions that will annoy critics no matter what. Either one leaves Ismene without an arc of her own, or –in this case- one gives her a somewhat tacked-on ending statement. This is due to no fault of Rachel Hosker, who delivers the lines quite wonderfully. But we are miles removed here from anything remotely resembling a classical version of Antigone.

But of course, that is precisely the point. And Sophocles’ masterpiece is precisely a ‘masterpiece’ because it continues to provoke and demand new interpretation. And so it is always with a great deal of interest, and an even greater deal of goodwill, that one encounters any production of ‘Antigone’. And it is entirely in the spirit of the titular heroine, to want to reshape something that is considered untouchable, and to bend it to her own will. We cannot, and should not, bury Lulu Raczka for her attempt to take the play in a new direction. Even if the results are somewhat uneven.