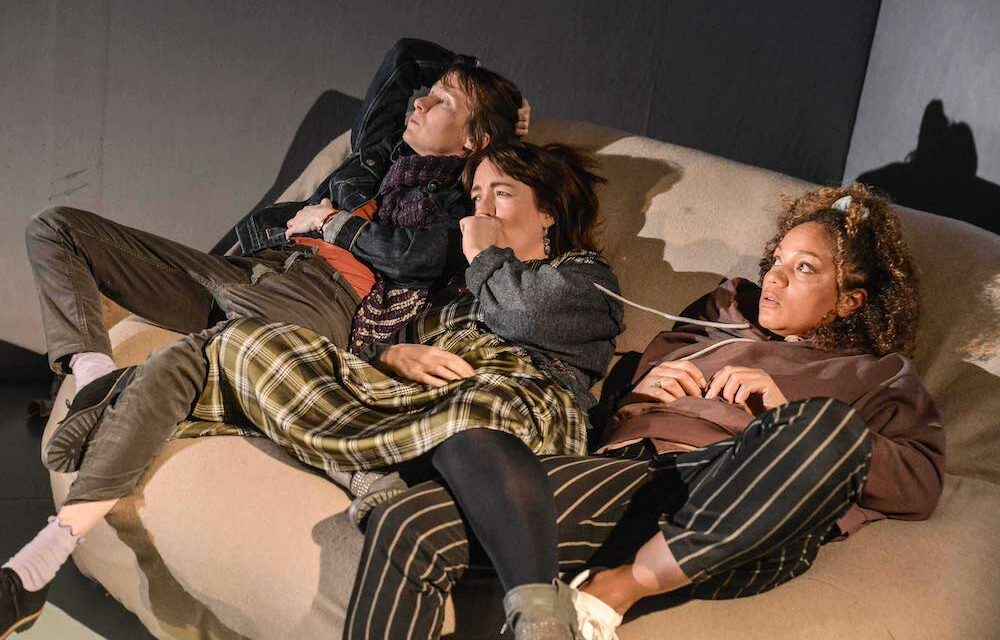 What has Saint Augustine of Hippo got to do with new writing? At first sight, not very much. That is, until you read Alan Burdick’s elegant program note to Alexandra Wood’s latest play, The Tyler Sisters, now finishing its run at this venue’s Downstairs studio space. For Augustine, writing his Confessions in the year 397, time was, apparently “us.” Time is a property of the mind, with the three tenses coexisting in our heads: past, present and future are real only in the moment. So Augustine’s insight is that the three tenses are one: “The present of past things, the present of present things, and the present of future things.” This is a truth so beautifully put that it almost sends me back to study early medieval philosophy.

Almost, but not quite. And, in fact, I don’t have to consult a dusty old paperback to see this perception in action— it’s enough to see Wood’s new play, which tells the story of three sisters from the north of England over the span of 40 years in just two hours of stage time (the 10-minute interval is not strictly necessary). Each scene is an incident from one year, and the story runs from 1990 until 2030. Sometimes the event is trivial, or extremely brief, but at other times it’s one of those things that you never ever forget. An emotional moment that stays with you all of your life. One you remember until you die.

The early scenes, which cover the teens and early 20s of Maddy (the eldest), Gail (middle sister) and Katrina (the youngest) begin with Maddy being a rather withdrawn 20-year-old, Gail, an irritable 18-year-old about to go to university and Katrina, a passionate 16-year-old who has taken over the middle sister’s room. As they squabble, you can see their distinct characters: Maddy is shy and avoids conflict; Gail is determined but also controlling; Katrina is confident and wants the most she can get out of life. These initial characteristics both remain constant and also subtly change over the ensuing decades.

The three different lives are a triple character portrait, influenced by Nicholas Nixon’s series of photographs of the Brown sisters (which also spans 40 years). As you’d expect, their experiences are the usual ones of love, marriage, pregnancy and childcare, with later bereavement, looking after parents and then the arrival of grandchildren. But also the more unexpected ones of losing your best friend in an accident, bringing up an unusually talented youngster, living abroad, discovering unimagined competence at work or having a more fluid sexuality. Through all of this the tensions between the siblings are instantly recognizable. And sometimes the tensions between them explode.

What is really wonderful, as the scenes speed by, are not only the shifting alliances between the young women, with each at some moment deeply disapproving of the actions of at least one of the others, but also the way in which the text illustrates the experience of memory. One sister might remember an incident that had a strong emotional impact while another has forgotten it completely: because we have witnessed these events ourselves we can perfectly perceive how the Tylers have remembered or mis-remembered them. And we just know how this phenomenon can also apply to ourselves.

Wood writes very naturalistic dialogue, with moments of wit, but her settings are neatly imagined: we travel from rooms in the parental home to flats, to hospitals, to a paintballing venue, to Spain and the South of France, pausing at a bar or a graveyard and then, however unwillingly, climbing up a mountain. At one point, early on, Wood has one sister complain that her younger sibling uses the American expression “This isn’t camp”, and then later lets us appreciate the irony when another sister insists that the whole family go camping on her birthday. There are many such subtle touches, and gradually a deep undertow of emotion grows.

There are also some lovely cultural references: the appearance of mobile phones means that no one actually watches the Christmas film anymore because they’re wrapped up in playing with their devices; a Wii sequence is short and snappy; a karaoke moment — when they sing the Backstreet Boys’ “I Want It That Way” — is gloriously enjoyable. The men in the lives of these sisters are kept offstage, but their actions do have an impact: lack of empathy and commitment; addiction issues; financial success or failure. My favourite piece of Wood’s writing is when one sister lists all the ways that her hurt sibling could get revenge on a disappointing male. More important to the women, however, are the children, and the experience of lesbian motherhood is gently eased into the action.

Director Abigail Graham steers our way through the deep and occasionally turbulent waters of sibling rivalry, sisterly friendship and female support on a bare set, by Naomi Kuyck-Cohen, which puts a welcome emphasis on the performances by the cast of three: Caroline Faber’s rather self-effacing Maddy gradually acquires layers of feeling and discovers a satisfaction, as well as unexpected pain, in her life; Bryony Hannah’s Gail begins as a repressed and bossy young woman who develops into a sounder understanding of her needs; Angela Griffin’s punky teen grows into a competent if passionate individual. As the characters age before our eyes, we can only be blown away by the chemistry of the actors. Watching the epic sweep of this family history is very satisfying indeed.

The Tyler Sisters is at the Hampstead Theatre until January 18.