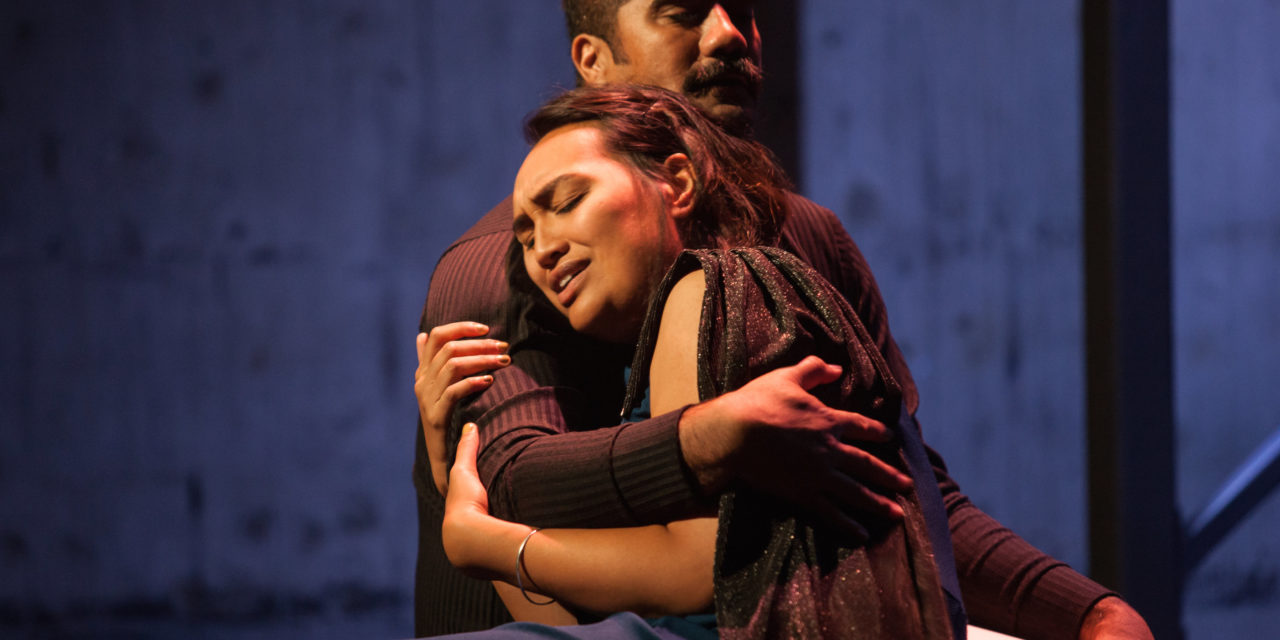 Hone Kouka’s new play Bless the Child plunges us straight into the heart of a crisis. A baby Ara, has been found dead and her mother Shardae (Carrie Green) is accused of her murder. This tragic situation reflects the sad reality that New Zealand/Aotearoa leads the world in figures for child neglect and abuse. According to Unicef, New Zealand has “one of the worst records of child abuse in the developed world.”  The fictional situation in Bless the Child reflects the facts of some horrific child murders including Delcilia Witika (1991), Cris and Cru Kahui (2006) and Nia Glassey (2007). The death of Delcilia Witikia partially inspired Niuean/Samoan playwright Diana Fuemana’s play Mapaki (1999), whose protagonist Fisi is a victim of domestic violence. But in that play, Fuemana stopped short of having Fisi kill her child. Instead, she is imprisoned for killing her abusive partner.

Bless the Child does not shy away from direct engagement with the emotions and politics of this charged subject matter. Shardae is presented as a flawed character who protests her innocence but refuses to disclose where she was when her baby died. Her other children have been put into state care, yet we are asked not to judge but to empathize with her. Although the plot hinges on the search to identify the murderer, the play does not ask so much who did it, but why?

The premiere production of Bless the Child opened at the Wellington-based New Zealand Festival (the oldest and largest arts festival in the country) in March, where it sparked intense discussion and contrasting reactions. Like the acclaimed feature film Waru (2017) which also deals with child abuse in Māori communities, its subject matter proved too confronting for some.  At the matinee performance I attended, some left at half-time and the audience seized upon any hint of humor or lightness to relieve the tension.

Class emerges as a major issue in Bless the Child. Shardae’s welfare-dependent lifestyle contrasts with the upper-middle-class world of her cousin Khan (Regan Taylor), a smooth lawyer who is preparing to stand for parliament, and his elegant wife Hinemoa (Moana Ete) also a lawyer. In a controversial speech targeting “feral” Māori families Khan panders to the right-wing vote and is branded kūpapa (traitor) by other Māori people. Hinemoa laments, “I am afraid of my own people. I have no idea what their world is like”. Initially refusing to act as defense counsel for Shardae, Khan relents, and she accepts him as counsel because he is whānau (family). In an echo of Shardae’s nightmare, Hinemoa and Khan’s young baby cries incessantly, seeming to symbolize the collective distress while reinforcing that child neglect is not just a working class problem. A legal intern Mata (Ani-Piki Tuari), who is also related to Shardae brings some softness and humanity to this bleak world as she seeks justice for the deceased baby. 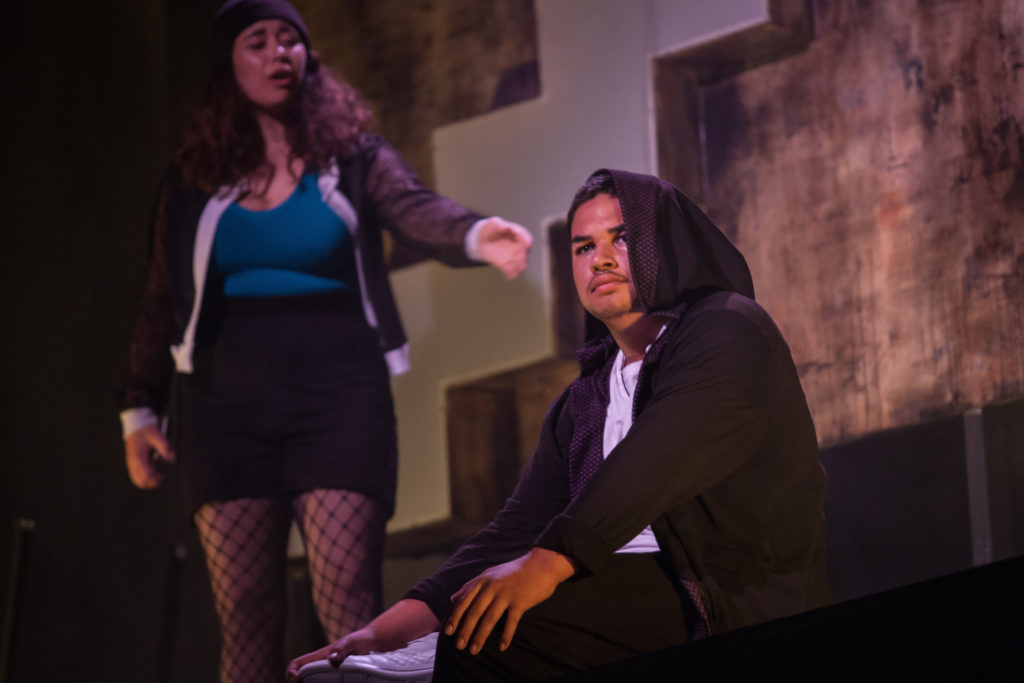 A sub-plot depicts three youths beating up and kidnapping Irāia (Scotty Cotter) who they suspect may know something about the identity of Ara’s killer. This highlights the desire to find someone to blame in high-profile child abuse cases. The kidnappers believe the cops to be useless, and that they have to fight to support Shardae because no-one else will. There is a heightened reality in this charged situation. Adrenalin-pumped Amanda (Maia Diamond) sees herself as a volatile, Tarantino-esque anti-heroine. In Diamond’s spirited performance she provides some relief to the tragic tone. In contrast, her boyfriend Taylor (Lionel Wellington) wrestles with the ethics of the situation and seeks guidance from the Māori gods in a moving haka sequence. The third kidnapper Pohe (Shania Bailey-Edmonds) is a “good girl” whose less aggressive humanitarian stance is much more effective in discovering the truth about baby Ara’s death. In a brutal world, she dares to ask, “What’s so wrong with kindness?” 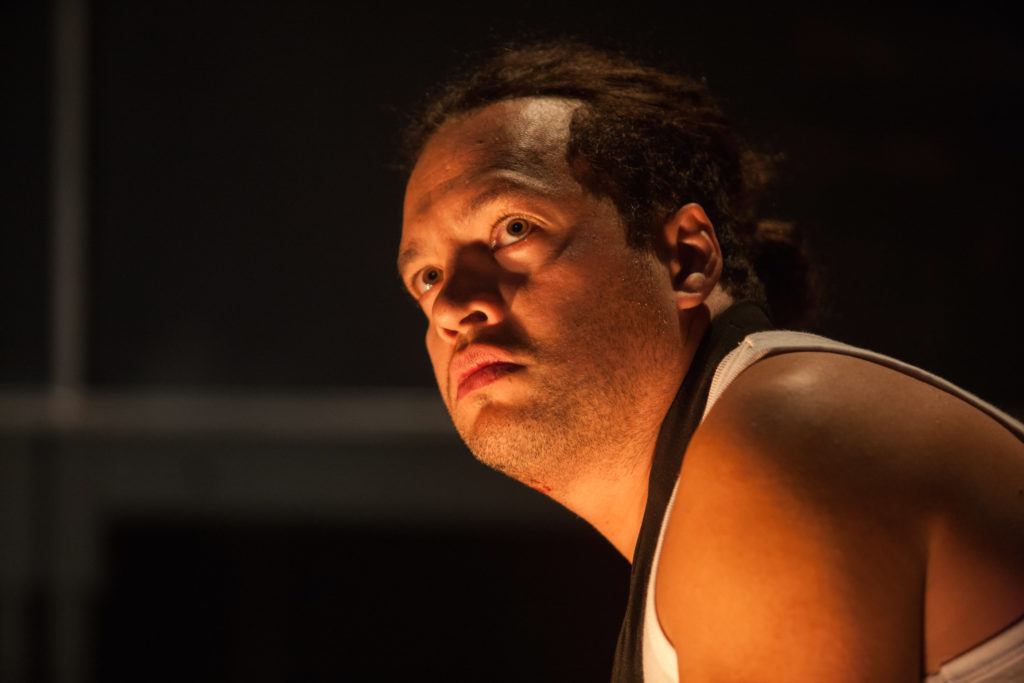 The play is served most beautifully by Mark McEntyre’s scenography, Natasha James’ noirish lighting, and Te Aihe Butler’s visceral soundscapes. The shiny black set with its levels and layers blends with the monumental concrete pillars of the Hannah Playhouse to suggest the different spaces and classes of a high-rise city. Shardae is symbolically imprisoned in a raised gauzed room, suspended as if floating in mid-air at stage left. As Shardae screams in grief, this stunning image simultaneously suggests Shardae’s captivity and the relentless scrutiny of every detail of her personal life. She pulls the curtains across as if to block out the public intrusion on her personal life. Opposite this, another larger rectangular curtained space suggests the much more opulent residence of Hinemoa and Kahn. The box-like constructions suggest that the characters are trapped in their social or class roles while casting the audience as witnesses, accusers or voyeurs.  Throughout the play, curtains, blinds and gauzes conceal and reveal scenes, reflecting the intricacies of the plot. Beneath Shardae’s apartment/prison tumbled white plastic chairs suggest a kind of urban underworld, becoming the hideout where the kidnappers torture Irāia.  The microphone Khan uses to deliver his controversial speech reinforces his power while also evoking the media technologies which hover like unseen predators at every stage of the investigation. Miria’s George’s direction is characterized by simultaneous action, cinematic-style imagery and a ferocious pace highlighting Kouka’s sizzling dialogue.

As one of Aotearoa’s most respected playwrights and a leader in Māori theatre for the past two decades, Hone Kouka has taken up the wero (challenge) issued by his late mother to write about the problem of child abuse in Māori communities and the result is a confronting and provocative work that is as difficult to deal with as its subject matter. Beginning and ending with beautifully performed choral waiata (songs), featuring some scenes and moments in Māori language and in Taylor’s reaching out to the spirits/gods, Bless the Child is clearly framed within Te Ao Māori (the Māori worldview) as a kind of whaikōrero (formal speech-making featuring rich metaphors and debate). Its quasi-Brechtian ending also has the quality of poroporoaki ( a farewell speech), placing the onus on the audience as representatives of society to take responsibility. In the intensity of the Hannah Playhouse’s heated intimacy, it demonstrates how effective live performance can be in confronting society with its worst problems, achieving some level of catharsis while also making a call for action.