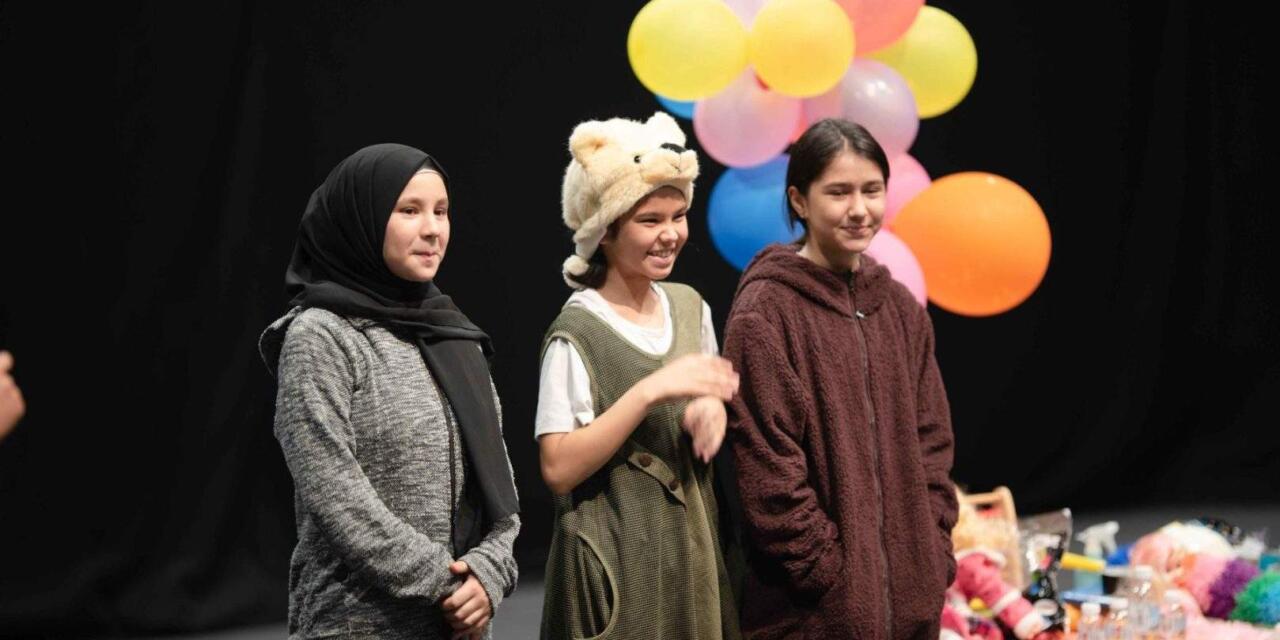 The pioneering theatre company, founded and run by Afghan theatre maker and refugee, Saleh Sepas, is creating a practice that enriches the cultural landscape for all Malaysians.

I met Saleh Sepas at his home in Sentul, a suburb outside of the centre of Kuala Lumpur on a Monday evening in June. His three children come to say hello and introduce themselves at various points with varying degrees of shyness. The oldest, Shamim, made her stage debut earlier that month in The Roof that Collapsed, a play written and directed by her father. Masooma, Sepas’s wife, is also an actor and will star in Sepas’s newest play And Then Came Spring, which opens in Kuala Lumpur next week. Theatre is clearly a family affair.

Yet, artistic opportunities in Malaysia are rare for a family like Sepas’s. “You cannot find any arts centre for refugees in Malaysia,” Sepas laments. In Malaysia, NGOs that offer services to refugee communities tend to focus on immediate needs such as food aid, education for children, healthcare and vocational training. But Sepas, who arrived in Malaysia from Afghanistan in 2016, began to dream of an arts centre for refugees in 2019.

He began by collecting books, “Many refugees don’t read books. They cannot go to libraries, they cannot go to university.” This barrier to access is in large part because Malaysia is not party to the 1951 Convention to Relating to the status of Refugees. This leaves refugees without fundamental rights like the right to work or education. Sepas was able to collect more than 2000 books to make his dream library a reality. However, the pandemic put a pause to his efforts, and he redistributed the books to refugees in the Ampang area of Kuala Lumpur instead.

But now, three years from when he first envisioned an arts centre, he is close to realizing his goal. Sepas has secured enough funding through a grant to run the arts centre, in Ampang, for a year. He envisions a space where refugees can have book discussions, take art classes, hold art and craft exhibitions and performances. “The main goal is art classes,” says Sepas.

The emphasis on making art accessible to refugees, particularly young refugees, is borne from Sepas’s firsthand experience with the transformational power of art. Prior to his arrival in Malaysia, Sepas had studied Augusto Boal’s Theatre of the Oppressed and Forum Theatre. Faced with no job prospects and a host country where he had few rights, he decided to try using theatre as a means of supporting himself. With the help of Kayhan Irani, who trained him in the Theatre of the Oppressed methodology, he fundraised RM18,000 to found Parastoo Theatre, which means swallow, a migratory bird, in Farsi.

But the challenges were not over. Actors from the refugee community who wanted to join Parastoo faced opposition from their own families. Sepas recounts that one actor’s family told – the actor, “Why do you go to the theatre? You lost your time, go and do other job.” This reflected a wider sentiment in his community that art, especially theatre, wasn’t useful when families often have pressing financial and other needs.

Despite this early resistance, Sepas has seen huge personal growth in his actors. His actors often faced mental health struggles, domestic violence, and the exhaustion of working physically demanding jobs. “They cannot focus, without focus, how do you do the rehearsal…So I support them and work with them with games, with discussion, with very special techniques of this [Forum Theatre] method.” He recounts how one of his actors was once unable to make eye contact due to past traumatic experiences, but has now appeared on panels as a speaker and an advocate.

He considers the empowerment his actors feel amongst Paratoo’s biggest achievements, “The Parastoo members, and the refugee community, they also understand, ‘Oh, we can do something positive in this society, in this community…So we also have voice, we also have power. We also have potential as a human.’”

The Theatre of the Oppressed, which was developed originally in Brazil with the goal of showing an audience how they can intervene in a situation and create change, is uniquely suited for the communities Sepas works with. Sepas has used it to discuss issues like domestic violence, child marriage and mental health across different refugee communities in Malaysia. Sepas speaks with admiration of the solutions his audiences have come up with after Parastoo’s performances. After the staging of a play about domestic violence with a Rohingya community, the women suggested that men should train other men about domestic violence. Their rationale, says Sepas: “If the women train the men, they [the men] think, ‘Oh, this is anti-man.’” It’s an example of how Forum Theatre allows people to articulate solutions that make sense in their contexts. 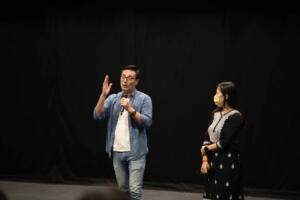 Saleh Sepas during the Q&A for “The Roof that Collapsed.” Photo credit: Amin Kamrani.

It’s a counter to the mainstream narrative about refugees in Malaysia and the wider world. A Google image search of the terms “refugee Malaysia” turns up pictures of groups of tired looking people huddled together on boats or sitting on the ground or in the midst of fleeing. It’s a preconceived image that Sepas is only too familiar with: “The host community or the international community, they think refugees don’t have any skills and knowledge…they’re hopeless, they’re in need. Every time, they ask [for] support.”

In addition to working against these stereotypes, Parastoo also faces structural problems. When applying for grants, especially in the early years of Parastoo, Sepas was sometimes told he was expecting too much: ”’Oh, this is very high for refugee.’…[even though] this is the minimum, minimum budget.” In Malaysia, refugees often don’t have access to bank accounts, which makes renting a performance venue difficult. For Parastoo’s last performance on 4 June, The Roof that Collapsed, Sepas didn’t even have a rehearsal space, “I had one week rehearsal…I rehearsed with three actors in park[s]. Sentul park, Ampang Point park,” he says listing public parks in Kuala Lumpur. Despite the limited time and resources, the three actors, teen girls, two of whom were acting for the first time, gave powerful performances to a sold out show.

The problem of a suitable space surfaced again ahead of rehearsals for the company’s upcoming  show, And Then Came Spring, a play about a child bride’s journey from Afghanistan to Malaysia. I had hoped to attend their first rehearsal on 3 July, but the company had run into the problem of finding a suitable venue again. Two days before the rehearsal, I found Sepas hard at work with his friend and collaborator Jo Kukathas, of Instant Café Theatre, who is acting as artistic director, dramaturg and co-producer for the play. The two had been working all morning and through lunch time when I arrived for my 2 p.m. interview with Kukathas.

They first met four years ago when Sepas put out a call for books. Kukathas, who had been interested in meeting him for some time seized the opportunity: “The reason I wanted a meeting was because I felt…if I were a refugee for whatever reason and ended up in a foreign country, I would want to meet people who are interested in what I’m interested in…I thought, well, I would feel so isolated if I couldn’t get a chance to be with other people who love theater or who are directors…And when I met him, you know, we shared so much in common because we read the same books, plays.”

Following that meeting, Sepas and Kukathas collaborated on a staging of BLANK in 2019, a play by Iranian playwright Nassim Soleimanpour. The play starred actors Mwaffaq Alhajjar and Farzana Hussaini from Parastoo and Ghafir Akbar, Sharifah Amani and Arief Hamizan from Instant Café Theatre. BLANK_ was Kukathas’s first attempt to break down what she saw as separate platforms for refugee and non-refugee actors. “Why should we separate people into refugee, non refugee?…I’m working across languages all the time. So I thought rather than thinking of [it] as being refugee, non-refugee…I prefer to think of [it as] somebody whose work is in Persian. So I want to work with a Persian speaking collective, or Persian speaking actor.”

It’s a continuation of Kukathas’s ethos to create hybrid works within the Malaysian theatre scene. In Malaysia, the arts scene is often silo-ed by language. Kukathas’s work is often labelled English language theater, a label she chafes at. “I hate the term English language theater, because I think it’s a theater where actually everybody’s included and all languages are included.” To counter that, she’s worked with Malay and Chinese language theatre groups, “We may speak different languages, but we also try to do things where we mix our languages, because that’s kind of what we do here [in Malaysia] anyway.”

Kukathas’s familiarity with working across languages has come in handy in this latest collaboration with Parastoo. While Sepas has written the majority of the script, Kukathas has written the final scene. At the time of our interview, the final scene was still being tweaked to possibly include more languages so that actors from different refugee communities can be included. Currently, the play includes Persian, Arabic, and English. A woman from Myanmar had contacted Sepas about possibly joining the cast. When he asked Kukathas about it she said, “I’ve kind of written the last scene…[but] let’s see whether we can also get her story in. And I was very keen about that because I do feel [that] there’s a lot of discrimination…against the Burmese community [in Malaysia].” In the end, the woman was not able to commit as she lived too far away to come to rehearsals. However, Kukathas is still open to including more languages in the final scene.

The play will open on 22 July, but Kukathas is confident it will all come together. The effort is worth it if it means space for more people to share their stories on stage. The spirit of this inclusiveness that Parastoo and Instant Café Theatre are striving for with And Then Came Spring connects to Sepas’s ethos when it comes to art. “Humans need art. If you are a refugee or non-refugee, you are human finally. You need art. Life without art [it’s like]…food [that] doesn’t have salt.”

And Then Came Spring by Parastoo Theatre and The Instant Café Theatre Company runs from 22 July – 24 July 2022 at the Damansara Performing Arts Centre. More information here.

This article was originally published by ArtsEquator on July 13, 2022, and has been reposted with permission. To read the original article, click here. 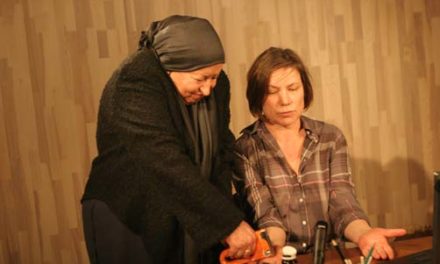 Aart Does Not Come From Justice: An Interview With Bożena Umińska-Keff 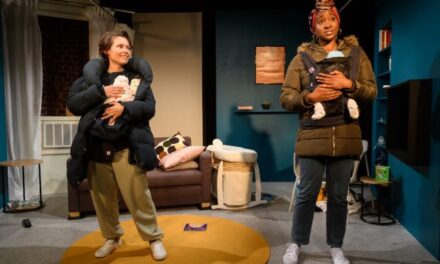 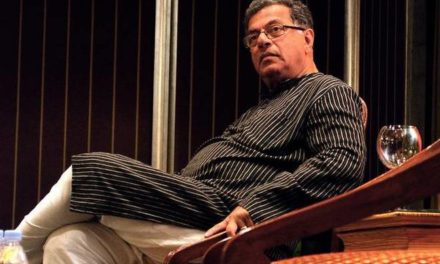