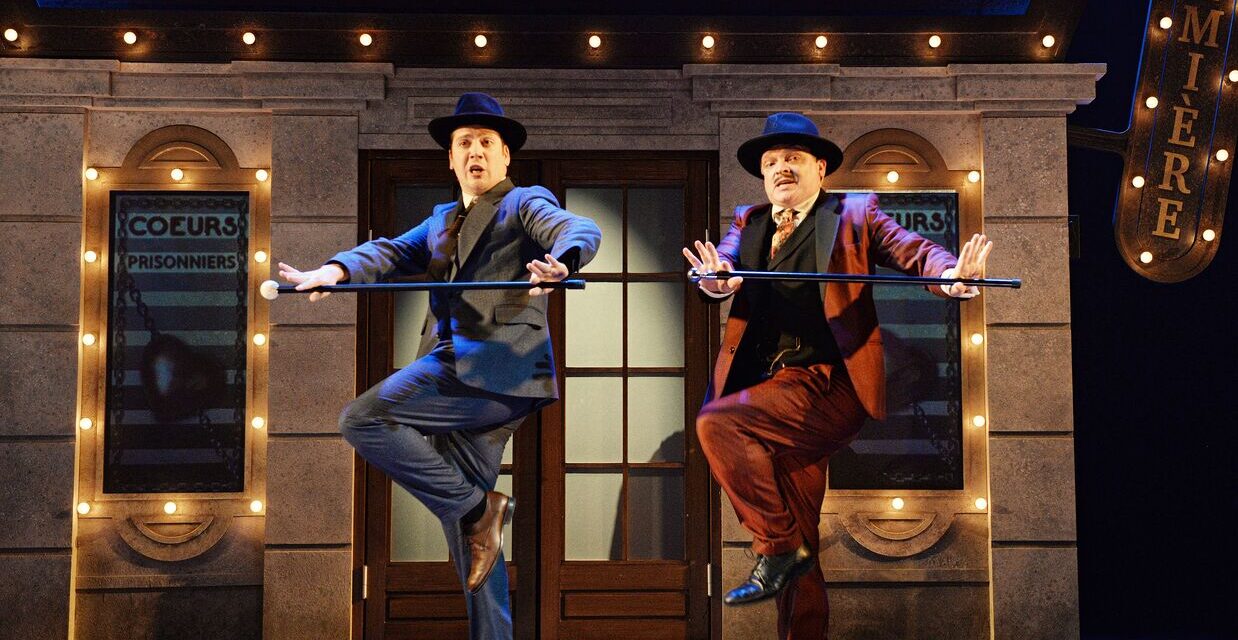 A week after Josephine Baker posthumously entered the French Panthéon, a musical about two producers with a hairbrained scheme to outrage all “races, creeds and religions” debuted at the Théâtre de Paris.[i] In most senses, Josephine Baker and Les Producteurs are worlds apart: she, the performer and singer who participated in the French Résistance against the Nazis; this show, a sequin- and streamer-festooned ceremony to the very Fascist figure Baker fought against. Adapted from Mel Brooks’ English-language The Producers, which has been a hit both on Broadway and in the West End, the story follows two Broadway impresarios, Max Bialystock (played by Serge Postigo) and Leo Bloom (Benoît Cauden), as they devise a plan to make a fortune out of a sure commercial flop honoring the life of Adolf Hitler.

Sometimes, though, coincidences are worth thinking through. Josephine Baker, an American who acquired French citizenship, has become France’s first black woman to be enthroned in the Panthéon. Les Producteurs is about cultural differences in America, more precisely about women, foreigners, gay men, and Jews. Baker proved decades earlier that “America” and “cultural difference”, when brought together, were commercial winners. She drew crowds to the Parisian cabarets in the first half of the twentieth century. As Maya Angelou would later confirm, after a stay in Paris as part of the cast of Porgy and Bess in 1954, “[t]he French could entertain the idea of me because they were not immersed in guilt about a mutual history”.[ii] Black Americans enable the French to sidestep their own history of colonialism and homegrown prejudice.

The French have in fact made a habit out of embracing gendered, racialized, and sexual minorities if they come from the United States. The word queer also remains untranslated in French, as a distinctly American concept. Les Producteurs’ accolade-accumulating director Alexis Michalik (Une Histoire d’amour (2020), Edmond (2016), and Le Porteur d’histoire (2012)) has tapped into this sure commercial formula.

Josephine Baker’s story epitomizes the distinctly American quality of musical theatre in France—what Hugh Dauncey has characterized as “the glamorous, technically proficient Hollywood model”.[iii] There is no easy equivalent of the West End or Broadway in Paris. Notwithstanding exceptions like Roméo et Juliette (Gérard Presgurvic, 2001), musicals, which have a more modest following in France than in either the USA or the UK, are often commercially viable because they are marked as American imports. As one internet user enthused on the French ticketing website billetreduc.fr, Michalik’s Les Producteurs is an irresistible show à l’américaine (un show irrésistible à l’américaine).[iv]

A joke about parking in Les Producteurs cements France’s constitutional opposition to the musical: in Mel Brooks’ original script, producer Max Bialystock discovers that the author of Springtime for Hitler (Les Fleurs pour Hitler or Flowers for Hitler in the French) lives in “off-Broadway”, a place Bialystock deplores for its “[m]imes, experimental theatre, no parking”.[v] In Michalik’s adaptation, this becomes a quip about the perennial parking problems during the Avignon theatre festival, held every year in July. Off-Broadway may be adapted to the French context but not Broadway itself. France is figured as the home of the avant-garde, while New York, the hub of the ethically questionable genre of the musical. Bialystock and Bloom, both Jewish, are willing to forsake their pride if their Hitler-themed flop means bringing in the bucks on Broadway.

Barring exceptions like the Avignon joke, Les Producteurs doesn’t contain a great deal of French cultural references. Theatre critic Johan Faerber lamented this, calling Michalik less of a “producteur”, a producer, than a “reproducteur”, a reproducer.[vi] But aside from the fact that Americanness is a commercially sound strategy in a country not especially enamoured of the musical, certain elements in Mel Brooks’ script appear to work effortlessly in the French context. The deranged character Franz Liebkind (Régis Vallée), the German playwright who pens Springtime for Hitler, expresses his distaste for the BBC and its mythification of Winston Churchill Liebkind restates Hitler’s full name as “Adolf Elizabeth Hitler” on account of the “Führer’s” ancestral origins in a “long line of English queens”.[vii] Comically camp, this joke may nonetheless be unsettling for West End audiences, as it targets the British population, which has been overfed on Churchillian glory and underfed on Edward VIII’s (the abdicated king’s) early sympathies with Nazism. For the French, though, the looming spectre of perfide albion (perfidious albion)—a quip I hear often enough as a British person in France—is recognizably risible. Les Producteurs seems to tap into a mutual penchant the French and Americans have for berating the British. Perfide albion describes the French side of a love-hate relationship with Britain that extends from the Norman conquest to Brexit, but it can be compared to the saying “the British are coming”, referencing American independence.

Another of the few transcultural modifications sees Springtime for Hitler director Roger de Bris (David Eguren), an effeminate, gay man, complaining that his costume for the choreographers’ ball looks more like the “Statue of Liberty” than the intended Grand Duchess Anastasia. In the original script, the costume is compared to the Chrysler building. The translation seems site-specific: liberty in miniature stands proud in the middle of the Seine near Trocadéro in Paris as a reminder of the history of the Franco-American friendship sealed by the donation of the real Statue of Liberty (built by Gustave Eiffel) by France to the United States in the nineteenth century. Liberty is visually camped up, her verdigris veneer (in fact oxidized copper) becoming glitzy gold in Les Producteurs. This character, Roger “de Bris,” marries an American camp with a French-sounding surname. He makes outrageous statements, describing Springtime for Hitler as “drenched with historical goodies”[i] and declaring that some intensive re-editing will be needed to make the show’s final act (when Germany loses the war) less “downbeat”.[ii] These seem to pass muster, generate peals of laughter even, because his effeminate flamboyancy, as France Télévision critic Sophie Jouve describes, is “straight out of La Cage aux folles” (tout droit sorti de La Cage aux folles).[iii] Though La Cage was originally a French-language play written by Jean Poiret (1973), the story only became a musical when Jerry Herman adapted in 1983 for Broadway.[iv] Considered the first hit musical to openly represent gay issues, La Cage has ventured back to French stages by way of Herman’s American refraction.[v]

Refraction is an appropriately queer metaphor here: just as a beam of light, when refracted through a prism, engenders a rainbow effect, the portrait of America refracted through Michalik’s French stage production has generated multi-hued responses.

A word that comes up repeatedly in reactions to Michalik’s musical is “potache”.[vi] Referring to the traits of schoolchildren, the word is often used to describe puerile humor. Upon quitting his job as an accountant for Broadway, Leo Bloom (Cauden) rejects his boss’s insinuations of excessive toilet breaks with the phrase, “Je ne vais pas faire pipi, je vais faire carrière”—“I’m not going to the toilet, I’m going to find a career”. Prolonging the first syllable of “carrière”, Cauden conjures up the French word for “poo”: caca. Shortly after, Bloom recounts that he felt the need to retire from a night on the tiles when one member of de Bris’s queer clan (dressed up as an American Indian) offered him the “pipe de l’amitié”, the “peace pipe”, which becomes sexual in the French adaptation, playing on the second meaning of “pipe”, the French slang for “blow job”.

A number of spectators have remarked on the crude stereotypes of Les Producteurs—not just hyperbolically camp men tripping over themselves to produce Springtime for Hitler, but also a black choreographer (Léo Maindron) in leggings that highlight a bulging sex, a German nostalgic for his “Führer”, money-grabbing Jewish leads, and a nubile Swedish blonde, Ulla (Roxane Le Texier). Undeniable though this is, there are potential counterarguments. The show’s humor is “grosses ficelles” as my theatre companion described. The expression conjures up the idea of a tapestry or canvas whose “thick strings” make a work of art unsubtle and jarring. Les Producteurs, I think, uses the idea of structural “strings” to its advantage. We catch glimpses of the wings and the space behind the backdrop where stagehands (in costume or otherwise) help prepare characters or simply roam around. For me, the metatheatrical gesture stirred self-reflexiveness. Progressively, I realized that I was not simply watching a musical about a plan to create a profitable Fascist flop, which ironically becomes a huge hit and a catastrophic commercial loss for Bialystock and Bloom; I was complicit in the market for “bad taste” that Bialystock and Bloom seek to capitalize on,[vii] watching an off-color comedy that I found (despite myself) highly entertaining. Characterized as being “based on a false story” in the publicity poster (d’après une fausse histoire), Les Producteurs is intent on selling itself as ironic. The story’s original author Mel Brooks, a Jewish man who grew up in poverty and who was a war veteran himself, is hardly insensitive to the topics of anti-Semitism, World War II, or cultural difference than run through the story.[i] Yet, irony doesn’t automatically generate a get-out-of-jail free pass, as the show reminds us when Bialystock and Bloom both ending up in “Sing Sing” (pun intended) for their attempted fraud.[ii] There are some perplexing and problematic issues of this French production. Except for Léo Maindren (whose other musical credits include Ghost and Chicago), the cast is overwhelmingly white. For a story about cultural differences, this should not be overlooked. Postigo and Cauden, in the roles of Bialystock and Bloom, may leave us spellbound with their comic timing and dance moves, but as corrupt Broadway (and pointedly not French) men, they also sidestep the question of France’s own checkered past with Nazi collaboration, the Vichy régime, and anti-Semitism.

Having received broadly positive reviews, Les Producteurs looks set to follow in the footsteps of the commercial success of its Anglophone counterparts, though probably on a lesser scale given the humbler status of musicals in France. Alex Symons has argued that The Producers’ original maker Mel Brooks is a “‘multimedia survivor’”, less concerned with making social commentary than finding the magic formula to create mass appeal.[iii] Brooks rewrote his 1968 film The Producers for Broadway in 2001, and then adapted it again for the film of the musical that came out in 2005 starring Nathan Lane, Uma Thurman, and Will Ferrell. In the final analysis, Alexis Michalik isn’t that different from Brooks. An up-and-coming director known for his slick, fast-paced shows, Michalik has his own fascination for finding the ingredients needed to make a theatrical hit, as Faerber observes.[iv] Les Producteurs is the latest manifestation of this, exploiting a time-honored tradition of what could be dubbed a “Josephine-Baker effect”—refracting difference through the distinctly American lens of the musical—to commercial effect.

[vii] Susan Gubar argues that The Producers is a critique of “bad taste”, a satire about the Broadway entertainment industry, cynically willing to produce vulgar shows if they make a profit. Gubar, “Racial Camp in The Producers and Bamboozled”. Film Quarterly 60: 2 (2006): 26-37.

[ii] “The French could entertain the idea of me because they were not immersed in guilt about a mutual history—just as white Americans found it easier to accept Africans, Cubans, or South American Blacks than the Blacks who had lived with them foot to neck for two hundred years.” Maya Angelou, Singin’ and Swingin’ and Gettin’ Merry Like Christmas (New York: Random House, 1976), p. 334.