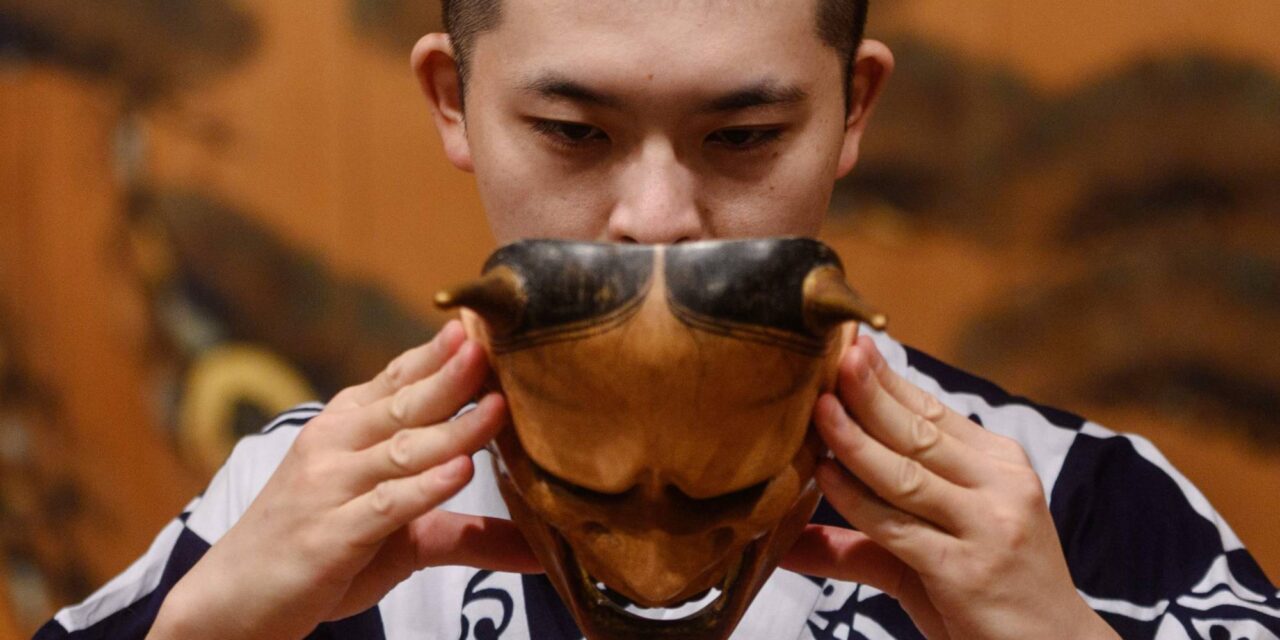 This photo taken on July 29, 2020 shows performer Kennosuke Nakamori putting on the "hannya" mask as he takes part in a rehearsal at the Kamakura Noh Theatre in the town of Kamakura in Kanagawa Prefecture, about one hour southwest of Tokyo. - The COVID-19 coronavirus pandemic has affected theatres across the world, but noh performers now face the ultimate question -- can the play that has been passed down for generations since the 14th century still survive after the pandemic? (Photo by Philip FONG / AFP) / TO GO WITH Japan-theatre-noh-virus-health, FOCUS by Natsuko FUKUE

Kennosuke Nakamori’s sonorous voice fills a small room as he practices the lines of a traditional noh play, even though he hasn’t performed before a live audience in months.

He moves gracefully as he rehearses the studied movements associated with the ancient art, but his serene exterior belies deep worries about the future of noh.

The coronavirus pandemic has shuttered theaters across Japan, and while other traditional art forms can rely on generous private backers or state subsidies, noh depends heavily on staging shows.

With audience and performer numbers already dwindling even before the pandemic, some in the industry fear the virus may sound the death knell for an art considered one of the oldest extant theater forms in the world.

“There are many performers who have stopped doing shows” due to the coronavirus, 33-year-old Nakamori said at his family’s theater in Kamakura, Kanagawa Prefecture.

“How many shows can we do during the pandemic … and can we earn a living? This is a big problem,” he said with a sigh.

In some ways, noh faces the same crisis as other arts around the world affected by coronavirus.

But while some governments are pumping money into performing arts, noh actors say they are seeing little state support and what they have been offered is impractical.

There are government subsidies for performances, but Nakamori said social distancing measures mean theaters must be half-empty for shows, so, even with subsidies, staging performances is a losing financial prospect.

“The more you perform on stage, the bigger the losses will be,” he said. “We need subsidies that compensate us when we cannot hold shows.”

Noh’s roots date back as far as the eighth century, but the plays performed today were largely developed around Japan’s Muromachi period (1336-1573).

The art form, which is on UNESCO’s Intangible Cultural Heritage list, combines dance, music and drama in a minimalist approach that sets it apart from the more elaborate sets, makeup and costumes of kabuki.

The plays are performed almost exclusively by male actors, who deliver lines in low, extended tones that can be difficult for modern audiences to understand.

They are accompanied by drummers and flutists on stages traditionally made from cypress wood and adorned with a single painted pine tree on the back wall. This photo taken on July 29, 2020 shows performer Kennosuke Nakamori posing for a photo after an interview with AFP at the Kamakura Noh Theatre in the town of Kamakura in Kanagawa Prefecture, about one hour southwest of Tokyo. – The COVID-19 coronavirus pandemic has affected theatres across the world, but noh performers now face the ultimate question — can the play that has been passed down for generations since the 14th century still survive after the pandemic? (Photo by Philip FONG / AFP) / TO GO WITH Japan-theatre-noh-virus-health, FOCUS by Natsuko FUKUE

Even before the pandemic, audiences for noh were shrinking and fewer young people undertook the intensive training required to perform.

Japan’s other major theater form, kabuki, can count on backing from major entertainment and film company Shochiku, which began running all major kabuki shows in 1929.

Other art forms, like bunraku puppetry, are heavily funded by the government.

“We work as individual freelancers so it’s a problem that there’s no funding for us,” said Nakamori’s father Kanta, 59, who passed the art down to his son.

Genjiro Okura, who plays the small kotsuzumi drum used in noh, has been hailed a national treasure by the government in recognition of his talents.

But that hasn’t protected the 62-year-old from the crisis.

“We’ve been pushed into a tough situation,” said Okura, who went four months without a single performance.

Noh artists often supplement their income by teaching amateurs, but that too has dried up.

“There are older people who learn noh as a hobby, but many quit due to the virus,” Okura said.

While some artists have tried to adapt to lockdowns by streaming performances online, Nakamori fears noh doesn’t lend itself well to the medium because of its stripped-back nature.

“If it’s live, with chants from musicians and powerful songs from performers, the audience doesn’t get bored,” he said. “But it’s hard to feel that with videos.”

Concerned about the future of noh, Nakamori and his father have launched a crowdfunding campaign to cover their expected losses for shows they hope to stage in the autumn.

They are also raising ticket prices and soliciting donations in return for noh-related gifts.

And despite some reservations, they plan to try streaming some performances and charging for them.

He hopes that online interest might even bring in new fans, though he remains wary about the virus, particularly the risks of an infection cluster at a theater.

Given noh’s centuries of history, he is hopeful “its charm won’t wane that easily.”

His son worries nonetheless that economic downturn may push arts down the list of priorities for the government.

“But noh is part of Japanese traditional arts and we have to protect it,” he said.

This article originally appeared on TheJapanTimes.com on September 18, 2020, and is reposted with permission. To read the original article, click here.