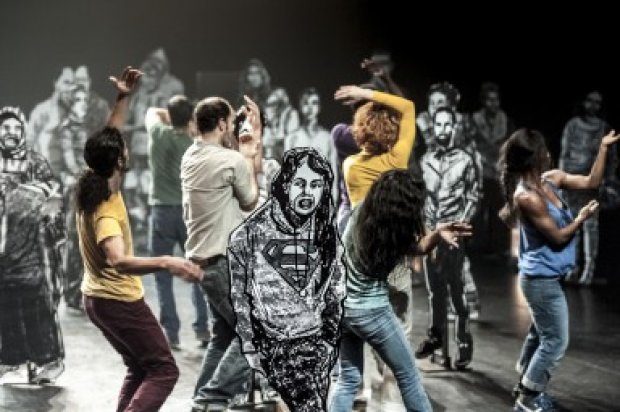 The censorship and strict regulation of the public sphere during autocratic times in Tunisia took their toll on artistic freedoms as they anesthetized most of cultural life. The revolutionary movement, however, marked the beginning of the 21st century in a hopeful way. Five years later, the Nomadic Art Center, Moussem, invited five young Tunisian directors to show their work on the stages of BOZAR and the  “Maison des Cultures” in Brussels.   The festival explored how artists look back on this period and tackled the question how artists can contribute to the construction of a new social conscience on the ruins of an autocratic regime.

“Moussem Cities @ Tunis” brought a fine selection of performances alternating revolutionary reflections and everyday disillusionment. Remarkably, many directors engaged with the revolutionary moment through canonical adaptations. This reflex surely is no exception in the present performing art scène, but wasn’t the “Arab Spring” supposed to herald the end of post-colonialism? Didn’t these historical upheavals pave the way for a fundamental restructuring of society, far removed from historical colonial and persistent postcolonial power structures and archaic oppositions such as “The West & The Rest?”  In his study Orientalism (1978), Edward Said warns not to underestimate the consequences of a widespread internalization and reproduction of the dominating Western cultural discourses embedded in the canon. Can one thus construct a new consciousness, as proposed by the festival, by referring time and again to a normative body of work and normative concepts without reproducing the entrenched historical power relations?

The presence of predominant tropes such as the “Jasmin Revolution” and the “Tunisian Exception” in the vocabulary of the promotional material of the festival is striking. There was the Velvet Revolution in Czechoslovakia, the Rose Revolution in Georgia, the Orange Revolution in Ukraine, so why not a Jasmine revolution in Tunisia, right? The label, consolidated by Western media, denoting a non-violent democratization wave, was immediately and collectively rejected by the Tunisian people as a regrettable euphemism, romanticizing the deadly sacrifice central in the—still ongoing and open-ended—struggle for liberty and dignity.  In this light, the proposition of literary critic Hamid Dabashi to understand the ongoing historical dynamics as “the end of post-colonialism” can look a bit premature and the special status that the West readily attributes to Tunisia partly relative. Following the “national disenchantment” after “independence” as described by novelist Hele Beji, one can for the time being confirm Dabashi’s insight that “the postcolonial did not overcome the colonial” but  “exacerbated it by negation.”

The Power of the Canon

The theatre piece D-Sisyphus, based on ‘The Myth of Sisyphus’ by Albert Camus, introduces us to the nocturnal existential stream of consciousness of Meher Awachri. But let us ask straight away, what does it mean for a young Tunisian director to adapt the writings of a settler, writing for a French audience, whose personal history is inextricably linked to that of the colonization of his own land? A lonely working class hero battles the absurdity of his own fate “armed” with only one wooden pillar, that in the end will become his most loyal companion.  The wooden pillar central to the performance is not only the emblem of his meaningless labor but also of the absurdity of his lust for life and the love for his family, the hypocrisy of society and even his ambivalent faith in Allah. After the wooden pillar accidentally nearly kills him, his piece of lumber becomes a trophy he effortlessly lifts over his shoulders as he reaches a sense of fulfillment through his daily struggle for existence.  Confronted with death, Awachri diverts this accidental existential insight into resolute determination.

According to the critical account by Edward Said in Culture and Imperialism,(1994) Camus is deeply rooted within the traditions, languages and discursive strategies of the French colonial appropriation of Algeria and by extension of the Maghreb. To discern the outlines of this massive structure one has to read Camus as “a metropolitan transfiguration of the colonial dilemma.” D-Sisyphus starts from the collective subjectivity of working class Tunisia, and through this self-centered denouement reproduces nothing less than the hegemonic individualistic conceptions of society engrained in the existential underpinnings of Camus’ essay.  Isn’t that in the end, not the same individualism that is the ideological cornerstone of the (post)colonial modern system that brought Tunisians where they are now in the first place?

A more subversive contribution to the construction of a new social consciousness on the ruins of the autocratic regime could be to develop renewed forms of contemporary collectivity and community, as suggested by Rochdi Belgasmi in his solo piece, Zoufri.  Here the artist sheds light on the forgotten history of “Rboukh,” the popular dance of Tunisia. He does so by performing its genealogy in the foyer of the theater, together with his audience. Worried about the folklorization of the traditional dance, he interrupts his own performance to make the historical context explicit.  Going back to the origins of Rboukh as an outlet valve in enclosed cafés where the working class used to sing and dance, he recalls the interiorized relation of the worker to the (post) colonial bourgeoisie.  Zoufri is an Algerian and Tunisian bastardization of the French Les Ouvriers.  After decades of occupation, the attitude of disdain of the French towards the working class is appropriated and encoded in the language. Still today the word “Zoufri” designates the (poorly dressed, bad-mannered and vulgar) outcast.  Rochdi explains that thanks to the popularity of the Mezouad music that accompanies “Rboukh,” the dance integrated Tunisian popular culture across class differences. By bridging the gap between the spontaneous everyday expression of “Rboukh” and contemporary dance and throughout an intense, shared, embodied experience. Rochdi succeeds in rehabilitating not only the social maladjustment of the proles and thugs contained in the idea of  “Zoufri” but also the overall perceived vulgarity of the public dancer in the collective consciousness of contemporary Tunisia, subsumed in the concept of “Ragass.”

In Sacré Printemps by Aïcha M’Barek and Hafiz Dhaou of the ChatHa company, a handful of dancers appear in the Horta Hall of BOZAR, as a swarm of demonstrators rising out of a cloud of tear gas. A pounding bass shows a direction in the darkness. Torn between individual and collective movements, the dancers try in vain to maneuver a way out. Their movements are formed through their relationship with a dozen black and white, life-size cardboard silhouettes of apparently ordinary Tunisians. The silhouettes are however inspired by the work of Bilel Berreni, who under the pseudonym of Zoo Project visually brought back to life the martyrs during the heydays of the revolution. Before he could finish his commission for the ChatHa company, the young artist himself was shot dead in Detroit. The physical presence of the dancers in the choreography of M’Barek and Dhaou thus not only speaks of life, but through their sometimes bumbling interaction with the cardboard silhouettes also to an apparently absent but yet inescapable death. The revolutionary philosopher Frantz Fanon understands the life of the damned of this world as a permanent struggle against an omnipresent and ever-menacing death. Life for most Tunisians, can, even after five years of revolution, and more than fifty years after colonial liberation, be regarded as a continuous struggle to find a way out of oppressive suffocation, to breathe.

However significant the performed tension between the lively dancing bodies and an omnipresent and ever-menacing death, it leaves one to wonder what the reference to Stravinsky adds to Sacré Printemps besides a nice wordplay and a negligible musical reference. When first performed, in the Théâtre des Champs-Élysées in 1913, the subversivity of the original ballet of Nijinsky nearly caused a riot. Sacré Printemps certainly does not live up to this historical potentiality. The re-enacting of revolutionary movements, insights and moments are insightful in and of themselves. What need is there, then, to legitimize the performance by a hardly maintainable reference to Nijinsky?  Did the directors fear their re-enactment would not be convincing enough as living memory?

Theatre as a disciplinary institution

The “Tunisian Exception” is another expression that trickled into the discourse of the festival, but does it correspond to reality?  Tunisia was already an exception in Western eyes before 2010 and it kept this status after it succeeded, relatively peacefully, in writing a new, even though fragile, democratic constitution. Five years after the start of the upheaval, the revolution is still fighting to achieve its goals of liberty and the bulk of the population still has not gained back its dignity.  Protest continues until today, but it is again violently oppressed, criminalized and silenced by the government.

Since the ousting of the president Zine El Abidine Ben Ali and the fall of the government, it has become clear that while the regime might have been beheaded, its structure is still in place.  In Ce que le Dictateur n’a pas dit director Meriem Bousselmi hands the mike, or better, several malfunctioning mics, to the toppled autocrat (played by Lassaad Jamoussi). The dictator narrates his experience of the revolution, through a sometimes faltering and fragmented monolog. The long-drawn-out narcissistic confession succeeds in turning normality upside down, by provoking the audience with the democratic illusion that a people really gets the politicians it deserves.  Despite the repetitive disruptive live instructions by the theatre director, the dictator resists the prepared text, as he would otherwise be submitting himself to the tyranny of the author or the expectations of the audience. The play is more than an intriguing and apologetic, at times tormenting monolog of an ex-dictator. In a Foucauldian way, the performance meticulously dissects the power dynamics rooted in the confessions of a deposed autocrat. It underlines the passivity of the audience that is being disciplined right here, right now during the performed confession. Through sequences of interruption and manipulation of the theatrical dispositive, Bousselmi subtly reveals that despite his apparent absence, the power of the tyrant still speaks or is spoken about and thus still acts self-evidently upon his audience, the people. Disclosing the black box as a disciplinary institution, she exposes every mediating institution that homogenizes discourse as truth and normalizes power relations. The self-immolation of a vegetable vendor can’t reverse history, can’t it?

Some representations during the Moussem Cities festival demonstrate how canonical references can be superfluous and even counter-productive in touching the sensibilities that would enable us to rethink the reality on the ground and contribute to the consciousness needed to overcome autocratic domination. Belgasmi shows us that it is possible to decenter normative references and contribute to a critical consciousness on the debris of a tyrannical regime. Inviting the audience to join the dance, he demonstrates that a thorough engagement and incorporation of movements from a contentious past facilitates the creation of collective spaces for new present and embodied understandings.  As “Action Zoo Humain” demonstrated, bringing the revolution to the stage also means too daring to delink from and revolutionize the canon.  Delinking, as suggested by political philosopher Walter Mignolo, is a condition that determines the different directions of possible processes of decolonization. This disconnection is decisive to re-articulate from the bottom up our understandings of and ways of standing in the world. Throughout this process, that which has been kept silent becomes audible, that which has been obscured visible once again. It is a fundamental rethinking of subjectivities that leaves individualism far behind, makes space for new commonalities and opens up different ways of re-existence.

This article was reposted with permission from www.e-tcetera.be. Read here.

This post was written by Joachim Ben Yakoub and Fida Hammami.