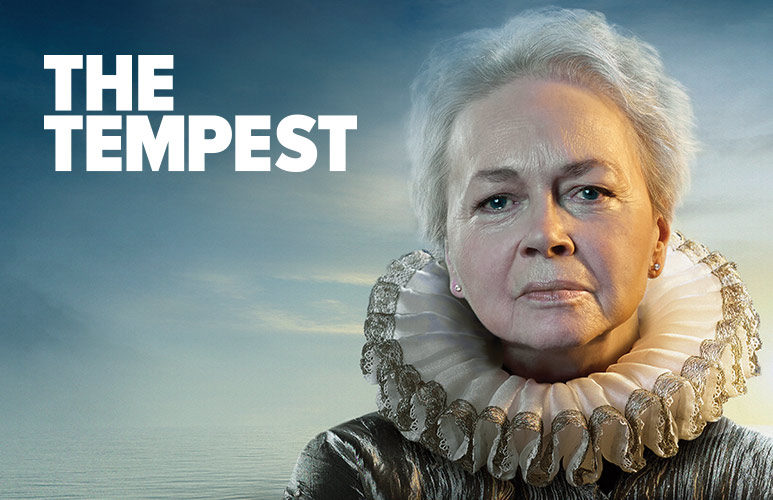 STRATFORD—We find ourselves immediately plunged into the opening shipwreck scene: sails flapping and breaking, winds shrieking through the darkness, frantic crew members shouting at each other—and, as always in productions of The Tempest, their words are pretty much intelligible.

But Shakespeare’s lines don’t matter that much at this point, so we can simply sit back and enjoy the Stratford Festival’s formidable resources being put to work. Unfettered theatricality holds no fears for director Antoni Cimolino, and here he has some sterling collaborators—set and costume designer Bretta Gerecke, lighting wizard Michael Walton, and sound designer Thomas Ryder Payne.

Collectively these people will carry on after the opening pyrotechnics to deliver perhaps the most visually stunning Tempest ever to grace the Festival Theatre stage. So be prepared for much more excitement, including some sumptuous explosions of color and the ferocious appearance of a mythic creature who seems to have roared to view directly out of a medieval bestiary.

So yes, we get spectacle—plenty of it. Yet even at the start, our attention is also being drawn to another kind of drama—to the silent authoritative presence of Prospero, the exiled noblewoman whose sorcery has brought about this terrible storm.

History and continuity of tradition have nurtured and revitalized the festival throughout its 65 years of life. And in a very real sense the presence of Martha Henry, in a splendid performance as Prospero, confirms and celebrates these values. This veteran actress, who played Miranda opposite William Hutt’s Prospero some 50 years ago, is a clad in a robe consisting of bits and pieces from costumes worn at Stratford by a long line of earlier Prosperos. This is an institution where the past is always on hand to revitalize the present.

There is an undeniable valedictorian aspect to Prospero’s character, as there also is to The Tempest, the final play that Shakespeare would write on his own. By the end of the piece, Prospero has undergone a significant arc: after using her powers to cause disaster at sea and bring her shipwrecked enemies under her magical control, she turns away from vengeance and embraces the grace of forgiveness. There have been angrier Prosperos over the years, but Henry chooses to bring a quiet wisdom to the role—and you can easily believe that this includes the accumulated wisdom reflected in this actress’s own decades of service to Canadian theatre.

Suspicion and cynicism, the bitterness of simply living—these elements are present in this Prospero, and those early glimpses of a steely, unsettling resolve are palpable. But we also come to see the tenderness.

Henry quickly dispenses with any lingering arguments that this is a man’s role. She’s comfortably in charge of this character from the beginning, Furthermore, she passes the treacherous test that Shakespeare imposes on any actor portraying Prospero. That opening conversation with daughter Miranda, who shares exile with her mother on this enchanted isle, can be a killer. Shakespeare wants us to know how Prospero—in this production, the deposed “Duchess” of Milan—is driven from power by the machinations of brother Antonio and Alonso, King of Naples. But he does so by assigning Prospero a long-winded expository narrative that often leads to tedium in performance. Martha Henry stays the course by finding the simmering drama in these seemingly interminable lines. The declamatory approach is not for her: power, we are learning, can manifest itself in many ways, even as a mere whisper.

We still get ample evidence of how forcibly Henry can deliver the great speeches. But the more meditative moments also have an impact. She almost seems to throw away that famous declaration—“our revels now are ended”—as though it’s one more thing that she has to deal with before she breaks her staff in two. But in the wider context of what’s happening, it seems dramatically valid. When a weariness of the spirit seeps into those lines about “this rough magic” as she signals her readiness to yield her powers, there’s a tacit acceptance that it’s time to get things right. That includes forgiving the enemies she has imprisoned on her island—and doing something about her loyal spirit, Ariel, and the hag-born Caliban.

Many of Stratford’s most dependable company members are on hand for this production and that means an abundance of riches. There’s the joy of watching those two accomplished hands, Stephen Ouimette and Tom McCamus, turn dross into gold when they tackle the often tiresome roles of the drunken butler Trinculo and his roistering companion, Stephano. There are such company reliables as Graham Abbey, solid and convincing as the usurping Antonio, and Rod Beattie, a master of dithering wisdom as old Gonzalo. There have been more ethereal Ariels but Andre Morin brings poetry to the character both in his graceful physicality and in his airborne delivery of the lines.

When it comes to Caliban, the sea monster, Michael Blake finds poignancy even in the moments of grotesque comedy. And Shakespeare does give Caliban his moment of sad glory by assigning him that famous speech about an isle “full of noises”—and you sense the pain and yearning.

Miranda and Ferdinand are the two young lovers, portrayed here with gauche, affecting charm by Mamie Zwettler and Sebastien Heins. Their scenes keep reminding us that The Tempest is a romance. Further reminders are provided by music of ravishing beauty from Berthold Carriere, a veteran of 42 Stratford seasons. Carriere’s contribution further enhances the fluidity that Cimolino has sought for this production. No wonder that at times it achieves the texture of a tone poem.

This article originally appeared in Capital Critics’ Circle on June 30, 2018, and has been reposted with permission.