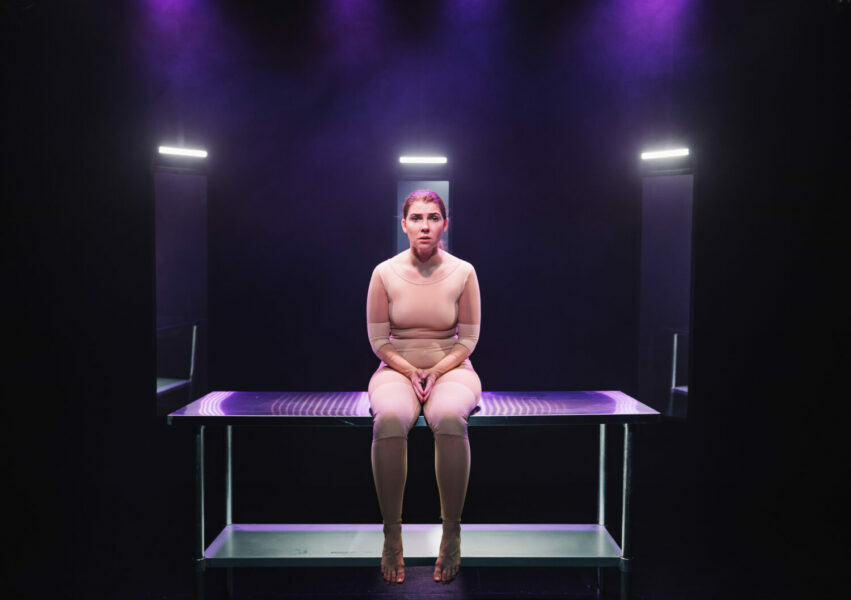 Milly Thomas is a writer and actor who hails from London. She is currently starring off-Broadway in Dust, a monologue play which she wrote and now performs in, at New York Theatre Workshop’s Fourth Street Theatre. Dust is a play about suicide and its impact on the people. Thomas plays the lead character who is no longer living, as well as all the other roles. These are the characters who experienced her pain, both before and after she died.

Directed by Sara Joyce, Dust arrived in New York City following runs across the U.K. and in London’s West End and goes through September 29th in a limited run.

Thomas is no stranger to theater. Her first full-length play, A First World Problem, opened at Theatre503 in July 2014 to critical acclaim. Her plays Brutal Cessation and Dust ran at The Edinburgh Fringe in 2017, with Milly receiving the Stage Edinburgh Award for her performance in Dust. In addition to her work in theater, her television credits include original BBC3 series, Clique and River City for BBC Scotland. She is currently under option with BBC Wales, Eleventh Hour Films & New Pictures, and she is developing Dust for television with Merman Productions. Her acting credits include roles on The Crown, Sex Education, and Downton Abbey. She attended The Royal Central School of Speech and Drama.

We spoke to Thomas about her intentions with the play Dust and what she’s working on next.

MT: This was a story I felt I had to share. I thought it couldn’t just be me. I want people to come away, knowing that suicide can’t be the answer. It can’t be. If mental health is a spectrum, and everyday fluctuates, and it’s different, then death is binary. It’s the surgical removal of hope. There’s no opportunity for days to get better. I wanted to tell a particular story, but I also wanted to make people laugh because that’s life.

You play someone deceased. What is it that experience like night after night?

MT: It’s almost something you really can’t be prepared for. I have to let the play happen. If I prepare for the end or if I endgame it, then the balance of the whole thing is lost. All I can arrange for is walking around that corner and seeing what’s on that table. Every time I can see, it has to be like it’s the first time. It’s all new and kind of novel because it’s as though she starts to realize this is permanent. That’s important to me. There’s a lot of denial in the play, the way a lot of people see suicide in real life. The other characters are constantly forcing her to come back to reality. Everyone is worried and refuses to believe her until it’s too late.

MT: Those scenes are exciting, mainly because I’m doing dialogue and everyone has such a unique point of view. I’ve been doing the show for two years now. In rehearsals, I’ve done hours of character work so I can jump between people and I know exactly how it feels in their chest. Grieving is different for mum than dad; Eli’s grief is different than Robbie’s pain. It’s where that is physically in your body. When we first mounted the play, it was the most important thing before we even got up to Edinburgh to make it an exercise in blocking. If it’s not clear what I’m seeing, and the audience has no hope in seeing anything. Otherwise, you’re just watching a girl walk around the stage. If my focus drops, the entire picture dissolves for everyone in the audience. There’s a tricky balance where the character work is so important, but it has to come with concrete blocking.

MT: She was instrumental in all of this. I had auditioned for her for an American play in the U.K. called Dryland and ended up getting the part. I decided then that I wanted to work with her. Then I had this idea and emailed her to get a coffee to talk about it. I was like, here’s what I’ve got, four pages of work on it. We went from there. We’d have coffee, she’d ask me questions, and I’d write. We ended up with so much material. I must have had 2-½ hours of content, and we whittled away to structure it in a certain way.

The worry with a story like this is that you don’t want it to get self-indulgent or lost. Alice is a tourist in her own life. She’s struggling to find her focus now that she’s dead. It’s essential to keep the content active. Otherwise, you’re watching someone learn things or comment on ideas for an hour and a bit which loses its charm very quickly. Sara was instrumental in looking at the story from the outside. It was a collaborative effort.

Your character is very stubborn. Can you talk about why you wrote her that way?

MT: It’s a millennial attitude. She is a controversial person. She comes in like a whirlwind and drops lines right where they are. It’s also about how depression can isolate you. She’s one of those people that would call world issues other people’s problems. She’s flippant to the point that they sound like punchlines with no consideration for whom those statements effect.

Have you made any changes to the play taking it from suburban England to the U.S.?

MT: Conversations are much more analytical here. Everything is like a paper exercise in the U.K. As a country, we are utterly devoid of empathy. The character is a comment on that very thing.

I wonder if the nuance has gotten lost in translation. This young woman is from Wilshire, one of the home counties, very posh, very privileged, very entitled. Those people feel they are allowed to speak about everything. Why shouldn’t they have opinions? In Britain, the character is quite polarizing, but people laugh quite loudly during the Isabel bit. She’s everything that a lot of people don’t want to be. I never mean to demonize her. I try to explain where she’s coming from. We have changed a few lines of dialogue that weren’t right for a New York audience.

Where are you taking this play next?

MT: We are in the process of seeing what’s next, gathering options. It’s very much a watch-this-space at the moment. I’m focused on developing a script for television, so hopefully, I’ll have something to announce on that soon.