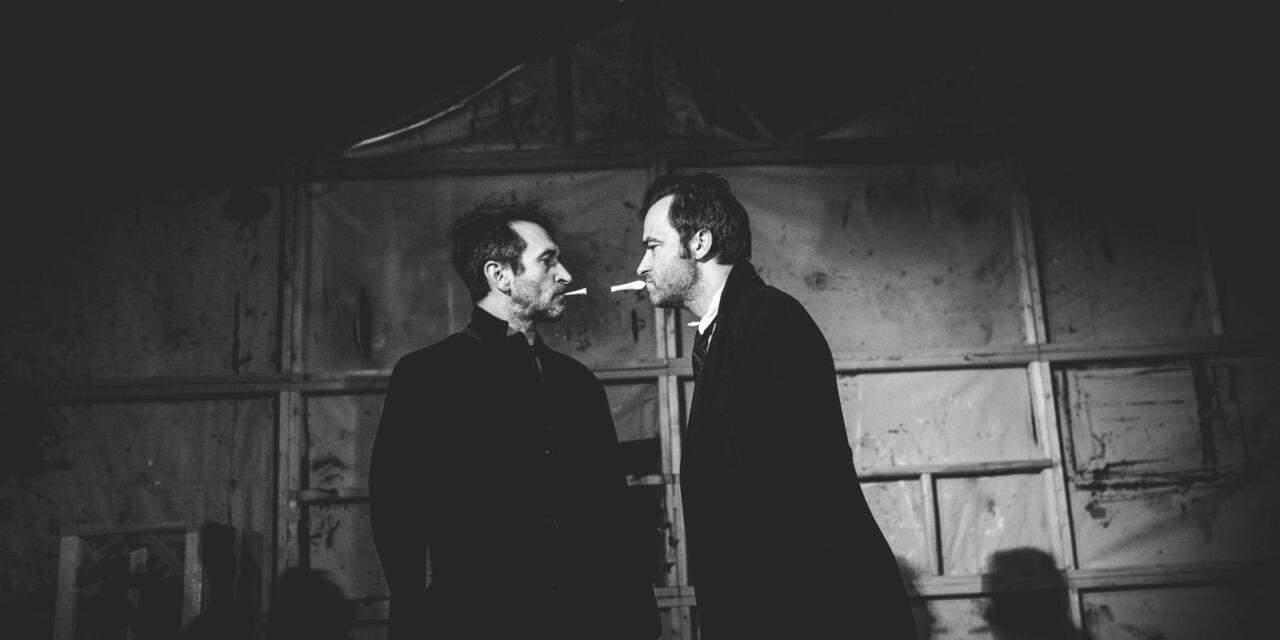 Why do we still remember theater that became history many decades ago? How do we remember plays that disappeared without a trace, physically gone, erased from memory? Wasn’t Alexei Granovsky—the founder of the Moscow Yiddish Theater (GOSET) and a character in Roman Freud’s new play The Singing Windmills—right when he said, “We’re inventing a completely new theater. And no one has a clue whether it will turn out to be brilliant or mediocre. And even if it does turn out to be brilliant, we will do only fifty performances and that’s it, no one will ever know how brilliant we were. Smoke and ashes.”

In fact, Granovsky’s theater, GOSET—closed by the Soviet authorities in 1949—did become legendary, mainly because of its star, Solomon Mikhoels, who was brutally killed on Stalin’s order in 1948. Mikhoels is remembered not as a mere human, or even as an actor, but as a larger-than-life figure—the symbol of Soviet Yiddish culture and of creative freedom under a totalitarian regime. This side of Mikhoels was brought to the stage in dialogue with another cultural legend, Charlie Chaplin, in a recent Moscow production of Dvoe (The Two) by Dmitrii Krymov.

Playwright Roman Freud, director Gera Sandler, producer Sergey Nagorny, and the PM Theater Company took a different approach in their production of The Singing Windmills by Roman Freud. Their play “is not about the cruelty of a repressive regime, but about the life, love, art, and fate of an artist. It is about eternal questions, the secrets behind the inspiration, and the price you are willing to pay for it.” The creators of The Singing Windmills do not tackle the ordeals of a great artist, like Alexander Pushkin did with Mozart in his tragedy “Mozart and Salieri,” but they focus instead on the everyday dilemmas of an artist-human, like Miloš Forman did with his Mozart in the movie Amadeus.

Once asked about the relationship between his real life and his life onstage, Mikhoels replied that when onstage playing a role, he “extracts” an image from himself, and that image “lives onstage.” In Mikhoels’s words, “The force of life onstage is unbelievably great and, obviously, has not been studied enough. Once, when performing in Sholem Aleichem’s 200,000 I fell, severely injuring my leg. However, my role required intense dancing, singing, and jumping. I performed all four acts. I felt severe pain during the intermissions, but no pain at all while performing onstage.” Freud’s play and Sandler and Nagorny’s production focus on the “severe pain during the intermissions,” which were Mikhoels’s life, and the main subject is the happy and sad, confident and perplexed, celebrating and suffering, vulnerable Solomon Mikhoels “offstage” and “behind the scenes.”

In the show, which premiered in March 2022, Mikhoels (played by Dima Koan) is immersed in life and never alone even when he desperately wants to be. Surrounding and interacting with Mikhoels are his wives Sara (Yelena Shmulenson), Zhenya (Margarita Mercurieva), and Asya (Anya Zicer), his mentor and boss Alexei Granovsky (Andrey Kuznetsov), his sister-in-law Elya (Gala Orlovskaya and Inna Yesilevskaya), his fellow actor and stage rival Veniamin Zuskin (Roman Freud), his loyal lieutenant David Chechik (Alex Notkin), and even a random acquaintance, theater critic Mikhail Levidov (Sergey Nagorny). Mikhoels could not be alone among these people because each of them would be lonely and lost without him. In terms of (Sigmund) Freud, it was as if Mikhoels resided within them on a subconscious level, making their lives meaningful. This is poignantly portrayed in the show’s final mise-en-scene with the rhyming still, elevated figure of Mikhoels (reminiscent of Paul Klee’s Angel of History, as interpreted by Walter Benjamin) with quotes from original Mikhoels’s roles pantomimed by the cast.

Remarkably, the creators of The Singing Windmills themselves were able to imagine and enact the subconscious Mikhoels, whom they imbibed via familial (and also mystical) channels: Roman Freud was born in the GOSET actors’ residence building in Moscow. Gera Sandler was taught acting by Nina, Mikhoels’s youngest daughter, and Anya Zicer was baby-sat by Natalia, Mikhoels’s eldest daughter. Remarkably and coincidentally, rehearsals started on January 12th, the day Mikhoels was killed, and the first two-week run of the show ended on March 13th, the eve of Mikhoels’s birthday. The second run of the “The Singing Windmills” will take place in New York’s Theatre 71 from June 1-12, 2022. Please visit The Singing Windmills official website for tickets and more information.