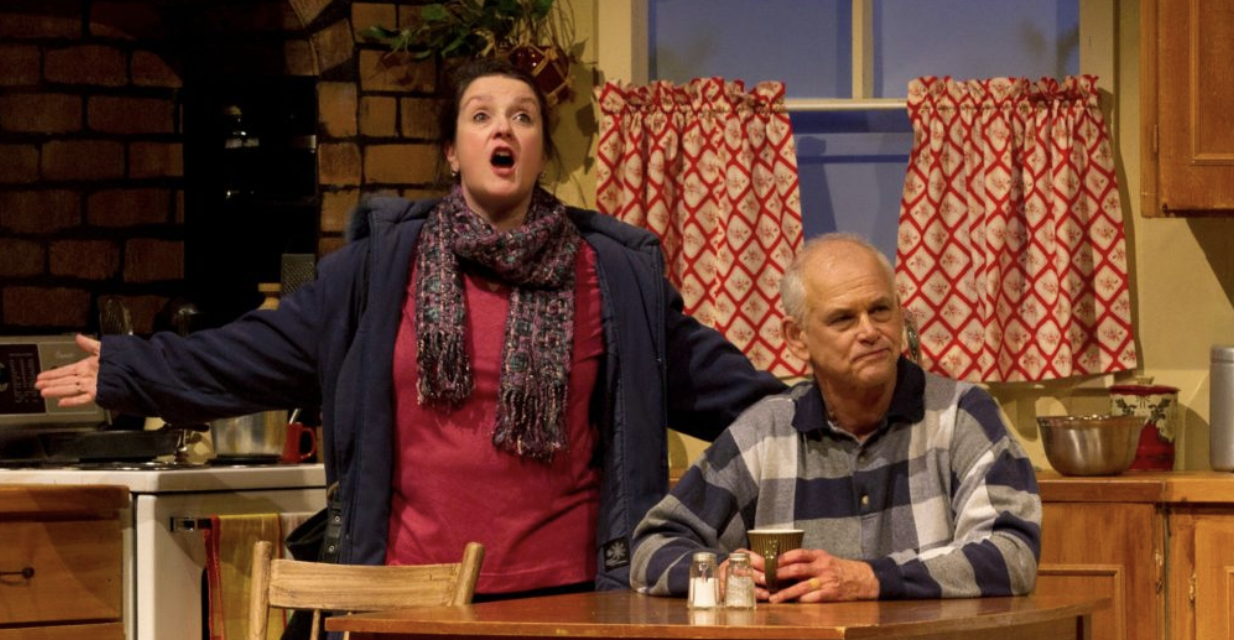 Mending Fences is a most beautifully constructed play that appears to concern a dysfunctional family relationship dominated by an apparently angry, self-centered patriarch who has given rise to a tortured young son and stubborn individuals who will have to learn how to listen to each other to eventually resolve their situation.  As events unfold, we realize there are deeply underlying misunderstandings, hurtful encounters, difficult memories and sad events in the past that have given rise to much pain and it is all unraveled magnificently by Norm Foster whose talent for dialogue is astounding!  Such quick wit, such razor-sharp responses and searing one-liners. He makes us laugh when we feel we should not be laughing and that is the secret to this admirable play. Plus, there is Bob Lackey as the sullen, apparently indifferent Harry who stifles any emotional connection with a verbal jab and an unexpected reaction that shocks and surprises us.  The actor’s impeccable timing, fast repartee, and complete sullen naturalism produces a performance that is almost stunning and suits to perfection Foster’s quick wit,  astounding one-liners, slip of the tongue insults and ongoing jokes about sex that pepper the play, sending it into an encounter of unexpected emotional depth. This is a brilliant performance!

A Saskatchewan farmer who has gone from one semi-tragedy in his life to another, meets his son Drew at the train station for the first time in 13 years. Why has Drew suddenly returned and what will the consequences be on the family?  The arrival of this unexpected third party suggests a Pinter-like structure which bodes very well for Foster’s play from the start but of course, the son is not an entire stranger and thus he carries with him much important emotional and psychological baggage which helps the writer and the audience unravel this stage event. Thanks to the deftly staged flashbacks with Barry Sims’ excellent lighting effects and director Barbara Kobolak’s finely tuned directing of the whole play,  it all works smoothly, even during the most complex moments.

There is a form of prologue that sets up Harry’s present situation in life,  plunging us into an ongoing running joke about the meaning of sex in his new life with Gin (Virginia) his recent girlfriend with whom his relationship becomes more problematic but who becomes an important catalyst as the play develops. Son Drew tries to reach out to the father whom he hasn’t seen in years but whose absence has clearly been a great hole in his life.  The young man is thwarted at every turn by a father who resists any attempt to become closer. Jesse Lalonde as the charming but troubled son also gives an excellent performance who makes his way very delicately, through difficult situations that reveal his great sadness without his ever going over the top and often without even speaking. His face is extremely expressive and one of the main tools he uses to produce such a  fine sensitive performance  that is beautifully sustained right to the end

It is funny, it is frustrating, it is even uncomfortable at times but it keeps us rivetted to the stage because the situation is so un predictable at first, so disturbing, so annoying and so fascinating.

Act I sets the situation very clearly and it isn’t until Act II that all the truths about this family come crashing through the walls. Drew’s honest questioning forces the memories to return, and we come to understand the source of all the anger, the resentment, the psychological reactions to such things as playing hockey, constant beer drinking, not wanting to fix a broken-down tractor or repairing things at home that aren’t working, symbolic events that reflect much deeper troubles eating away inside these individuals. The title becomes self-explanatory.

Teal Cochrane is the feisty girlfriend Gin who nurses her own emotional wounds but she incarnates a strong female presence in this crumbling household as she resists all temptations to give in and create a sense of relief in all this anger.  The actress, who is even given some good Lysistrata lines at one point, shows us just how versatile  she can be although Harry’s rather lightning reactions to her attempts at seduction seem a bit artificial and that whole logic seems a bit out of place at that point but then it was all part of a joke and  the only moment that is not  particularly naturalistic so it became a good form of comic relief.

Cathy Nobleman who plays Harry’s mother was also very convincing but I admit the play fumbles a bit at that point because the time relationship was not at all clear in those later flashbacks.  I assumed she was Drew’s mother all the way through and not Harry’s mother.  Thus, although the violent scenes with the mother were very well performed and explained much, they did not seem to fit the time frame somehow. It was a clear problem with the script that the director might have elucidated. On the other hand, Peggy Laverty’s costumes set the time frame very well and choice of music by David Ing and Ben Lagille was appropriate.

Becky Mardell’s set design captured the atmosphere of that older style house perfectly and because of Kobolak’s directing and Sims’ lighting, the scenography avoided any awkward lapses in time and gave the show a decidedly polished feel.

Thus the essential was clear, and the production created a strong emotional charge that made this evening a rewarding moment of extremely good theatre.

This piece originally appeared on Capital Critics Circle and has been reposted with permission from the author. 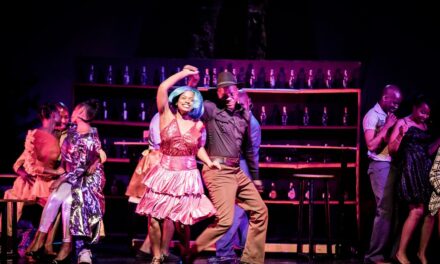