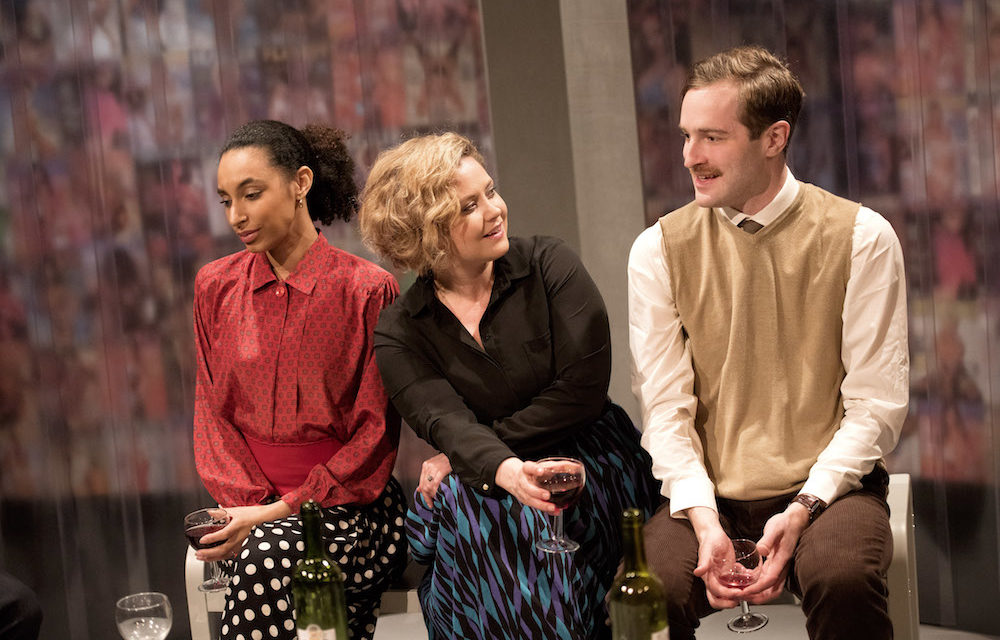 Neil McPherson, the long-serving head of this London fringe theatre, has a brilliant record of succeeding where many other venues have failed—namely in reviving both modern postwar classics and restaging the forgotten plays of recent decades. And all on a shoestring. His current revival of Sarah Daniels’s 1983 feminist classic, Masterpieces, is his latest good idea. It’s a play that is often seen, in textbooks, as typical of a militant femintern style of theatre-making so, in the #MeToo moment, it now acquires a renewed relevance. But is it really such a good play?

The first professional London production in 35 years, Masterpieces tells the story of Rowena, a young happily married, but a rather naive social worker who becomes increasingly exasperated by the everyday sexism all around her. When Hilary, one of her working-class female clients, is abused, she begins looking more closely at porn and how men—including her husband—tolerate and find excuses for their sexist desires and their sexist behavior. The play offers a case study in one woman’s journey of consciousness raising. When a man harasses Rowena at a Tube station, she pushes him under a train. When she is tried, the criminal justice system is satirized, and its attitude to women condemned.

Typical of a 1980s female playwright, Daniels tells the story in a non-linear way, which allows for juxtapositions of scenes, a device giving extra strength to her argument. The play also focuses on three liberal middle-class couples: Rowena and Trevor, their friends Yvonne and Ron, plus Rowena’s mother Jennifer and her second husband Clive. The women are neatly contrasted: while Rowena is, at the beginning, quite unsure of herself, Yvonne is a teacher and convinced feminist, and Jennifer is worldly wise, but initially accepts the men’s sexist behavior. The opening restaurant scene is a classic: the men tell rape jokes about nuns but are shocked when Yvonne tells an anti-male joke.

Daniels’s play makes the link between misogynistic jokes and misogynistic action. And reminds us that even liberals can have unpleasant attitudes. It argues passionately that the porn that shows images of sexual violence against women leads to real violence against women in the real world. Rowena, who is jailed for murder, in the end, makes a passionate declaration: “I don’t want anything to do with men who have knives or whips or men who look at photos of women tied and bound, or men who say relax and enjoy it. Or men who tell misogynist jokes.” Such clarion calls are mixed with much lighter scenes, such as an all-female picnic and Hilary’s amusing description of her use of Coca-Cola as a contraceptive.

But although Masterpieces is very strong thematically, making links between sexist jokes and snuff movies, it is weaker when it comes to character: I’m not convinced that, for all the liveliness of the dialogues, the women are much more than types, and the men are very thinly characterized. While this justly expresses Daniels’s anger, it doesn’t make for a really compelling play. On the other hand, there is undoubted power in Rowena’s journey from compliant wife to angry woman, even if the plot depends on her having watched not just a porn movie but a snuff movie (a type of film which has never been proven to exist and is probably an urban myth).

On a set, designed by Verity Quinn, whose plastic sheeting and porn-mag covers evoke the Soho sex shops of yesteryear, the cast double and treble, as they did in the original production, with only the excellent Olivia Darnley remaining one character, Rowena, throughout. There is very good work by Tessie Orange-Turner as Yvonne and Hilary and Sophie Doherty as Jennifer, the policewoman, and a parent. The men—Nicholas Cass-Beggs, Edward Killingback, and Rob Ostiere—offer support. While the play still works on stage, it also suggests how much has changed, or not, since the 1980s. Porn has become increasing domesticated and available, while middle-class manners have become increasingly reformed. If many men are still sexist, maybe they have just learned to hide it better.

Masterpieces is at the Finborough Theatre until May 19.

This article originally appeared in Aleks Sierz on May 1, 2018, and has been reposted with permission.