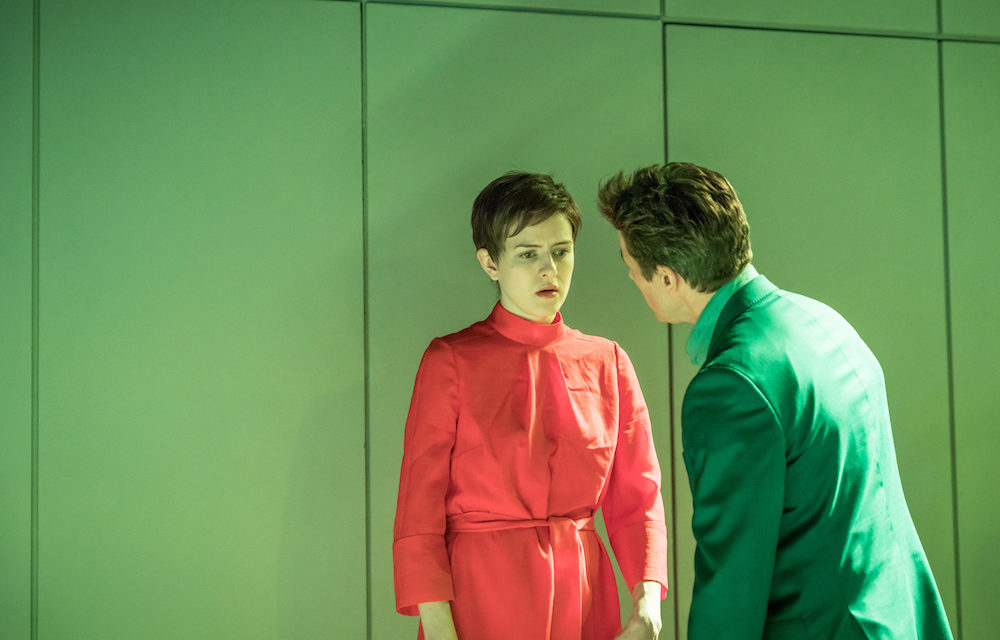 Playwright Martin Crimp’s 1993 satirical epic, The Treatment, is a fabulous work, but it’s rarely revived. Although much of his back catalogue — especially Attempts on Her Life (1997) — has been revisited, The Treatment has often been ignored, perhaps on account of its large cast, or because of its large scale. Now that the Almeida Theatre has decided to stage this story of how art cannibalises life we have the chance to judge its relevance some 25 years after its premiere.

Set in New York, the play tells the story of Anne, a young woman whose husband, Simon, likes to tie her up, silencing her with tape across her mouth. After she leaves him, she contacts two film producers, Jennifer and Andrew, who become interested in making a film of her story. Clifford, a has-been Broadway playwright, is hired to write the script and turns reality into a voyeuristic fantasy. Meanwhile, John, a black film actor who was once in love with Jennifer, is invited on board, and he effectively hijacks the project, becoming its producer. Nicky, the company secretary, adds her suggestions to the script. As the film develops, it becomes less and less like Anne’s real life.

The piece’s title alludes to the outline of a film, to medical care and, crucially, to the way we treat others. A city drama for our times, the play is full of urban cacophony, and it is dense with ideas. At an early point, Andrew describes his and Jennifer’s role as that of “facilitators,” and then metaphorically as a grid: “Like the city.” In one scene, Crimp satirises the American confessional mode; in another, he lampoons media artspeak. Typical of his style is the contrast, exemplified by Andrew, between a surface coolness and subterranean passions. And the story is full of Crimp’s characteristic preoccupations: the way language creates reality; media manipulation of ordinary people; life squeezed into art; male exploitation of women.

In this vision of a hellish if exhilarating urban experience, the main theme is not only the inherent cruelty of modern media, but also the question of identity. The media folk create a fake Anne that is more hyper-real than Anne herself, but at the same time the play suggests that it is almost impossible to truly know another person. Whenever Jenny says “I see” you can be sure that she doesn’t understand something, and indeed there are symbolic eyes (all-seeing or blind from birth) everywhere, especially in the references to voyeurism and King Lear. The play is also prescient: two years before the arrival of Sarah Kane’s Blasted, there is plenty of onstage sex as well as an act of blinding. In 1993, Crimp was a playwright already attuned to the new 1990s in-yer-face sensibility.

Typical also of the 1990s is the playwright’s spirited investigation of the idea of storytelling, and more crucially of the question of who owns the narratives of our lives. Likewise, why do we, the public, prefer the sensational story over the more ambiguous and nuanced account? And, if Anne is a victim (she says she isn’t) is she a complicit victim, or has she had victimhood thrust upon her? With its echoes of Harold Pinter, this play is a brilliantly written, metaphor-rich, depiction of perversion and desire.

Today, The Treatment’s satirical barbs, and darkly humorous one-liners, feel as fresh as ever, and the only thing that has dated are the jokes about the once-new sushi restaurants. Lyndsey Turner’s beautifully lit and vividly clear production is, for new audiences, an ideal introduction to Crimpland, and, for those familiar with the playwright’s work, a reminder of his verbal density, and intensity. Designed by Giles Cadle, this is a world of bright clothes and bright chatter in which people’s subjectivity is bulldozed by the most fashionable, if cold-hearted, people.

Turner’s cast look particularly youthful, with a cool if slightly unexpressive Julian Ovenden (Andrew) well matched by Indira Varma (Jennifer), who injects a dose of much-needed passion into the proceedings. Aisling Loftus’s Anne is a bit too restrained and lacking in quirkiness, but Ian Gelder and Gary Beadle are powerful stage presences as Clifford and John. Matthew Needham’s slightly sinister Simon is balanced by Ellora Torchia’s brightly spoken Nicky. As the metaphorical blind cab driver, Ben Onwukwe is unobtrusively funny. A large cast of supernumeraries from the venue’s Community Company help add an urban bustle to a production that, despite an occasionally uncertain pace, is a colourful account of a great New York story. Crimpland has rarely been so brittle, and so relevant.

This review was originally posted at sierz.co.uk. Reposted with permission. To read original review, click here