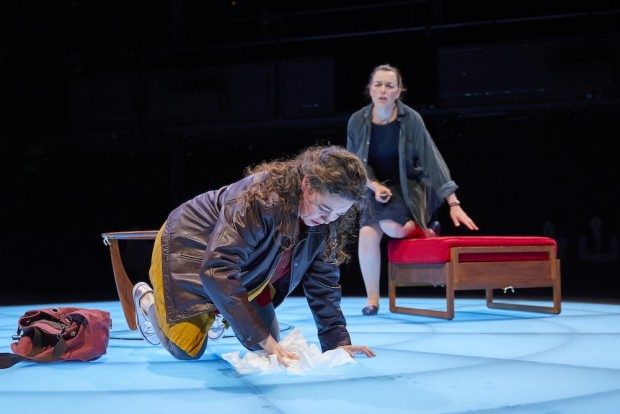 The question that always needs to be asked of any example of science on stage, and there are now very many, is this: does the science add anything to the meaning of the play? Or is it just fancy decoration? Lucy Kirkwood’s new drama, Mosquitoes, explores the relationship between two sisters — played by Olivias Coleman and Williams — in the context of the Large Hadron Collider at CERN in Geneva, and includes some speculation about what physics can tell us about life in general, and about the end of the world. Yes, it’s a big, bold play about scientific knowledge — and lots and lots of other stuff. Lots.

The two sisters are Alice (Williams), a physicist who is part of the team at CERN, and Jenny (Coleman), a Luton-based poorly employed New Ager who believes too much of what she reads on the internet. The excellent opening scene sets the tone: after years of trying, and following IVF treatment, Jenny is pregnant. She’s panicking about the imminent birth so she turns to Alice for support. But her big sister is exasperated that Jenny refuses to have an ultrasound because she’s read somewhere that it could harm her baby. Alice advocates the scientific approach (the risks of harm are low); Jenny is more instinctive (she’s in charge and it doesn’t feel right). They bond when Alice retells the story of the birth of her now teenage son, Luke.

Then tragedy strikes: Jenny’s baby dies because she refuses to give her the MMR vaccine, and Kirkwood brings the sisters together in Geneva in 2008, as the Large Hadron Collider goes live. So the family collision echoes the nuclear experiment, with the rational Alice trying to cope with 17-year-old Luke, who is intellectually bright but has very poor social skills, as well as a big crush on Natalie (the only other English girl in his class). Things are further complicated by the introduction of Henri, Alice’s dishy French scientist boyfriend, and Karen, the mother of the sisters, who is gradually beginning to suffer from dementia.

The emotional core of the story is the triangular relationship between Alice, Jenny and Karen, who is a retired nuclear physicist bitter at not having won the Nobel Prize. Alice is cool, calm and controlled (well, most of the time) while Jenny is a bit of a mess, suffering the loss of her child, the absence of her husband and unable to cope with the chaos life has thrown at her. She is both a cynic and a believer in alternatives to science; she smokes, drinks and drops pills. She’s a bit of a racist, a bit of Brexiteer. Meanwhile, Karen shoulders the desperation of a woman who realizes that she is losing her powers — an incident of incontinence underlines her vulnerability. But if Karen needs Jenny to look after her, who will look after Jenny? And if Alice can’t get through to Luke, how will he survive?

In between scenes, a narrator figure called The Boson comes on and offers intriguing snippets of scientific fact and fantasy. He represents not only Alice’s absent husband but also the idea that science can drive you to distraction. Too much reason, too much celebration, can turn into irrationality. Add to this a whole avalanche of themes, from internet bullying and cyber crime to belief in astrology, from learning a foreign language to the sexism of scientists, from visions of apocalypse to research that helps control epidemics (malaria and mosquitoes, the play’s title). Yes, it’s a big baggy monster of a play, overflowing with ideas and dripping with incidents.

As was the case with Kirkwood’s The Children, the more you think about the plotting, the more fragile the whole structure looks. A lot of the storytelling lacks dramatic punch, and there is often simply too much going on. Even with the central characters, it’s hard to be sure what the play is actually saying. Jenny’s journey seems to suggest that, despite the fact that she is not very bright, she nevertheless has lots of emotional intelligence. At times, she mothers Karen; at other times, she is a good aunt to Luke. The problem is that she proves her worth to us the audience rather than to Alice. Indeed, Alice finishes the play pretty much as she begins it: intellectually impressive but emotionally constricted.

And what does Mosquitoes say about science, apart from the banal notion that acquiring knowledge is one way of trying to control chaos? The idea that people are thrown together and collide like sub-atomic particles is not very convincing, and there seems to be a surfeit of metaphors: weak mosquitoes that kill millions (weak people can be stronger than ostensibly strong people), Quakers and belief (scientists can also be irrational) and information as a curse. With so much going on, the most impressive thing about Rufus Norris’s empathetic and nimble production is the control he exercises on the acting and the stage imagery, including the Big Bang, evocatively designed by Katrina Lindsay, with enjoyable psychedelic video by Finn Ross and Ian William Galloway. In the end, however, the design — like the science — is mainly decoration.

What carries the story is the acting: Coleman and Williams make a very well contrasted pair: Coleman is restless, spontaneous and needy, while Williams is self-possessed, icy and controlled (until she cracks). Their slightly monstrous mother Karen is perfectly embodied by Amanda Boxer, while her grandson Luke is engagingly well played by Joseph Quinn. There’s also excellent support from Paul Hilton (The Boson), Yoli Fuller (Henri) and Sofia Barclay (Natalie). But however good the acting, and however entertaining the production — you don’t often see a granny spanking her daughter or a selfie of a penis going viral — I can’t quite shake off the distinct feeling that Kirkwood has lost control of her material, and that there are some five plays here all crammed into one. Shouldn’t someone at the National have told her that?

This post originally appeared on Aleks Sierz on July 31st 2017. It has been reposted with permission. 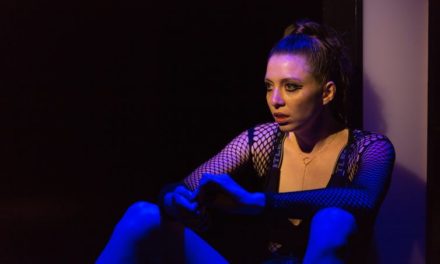